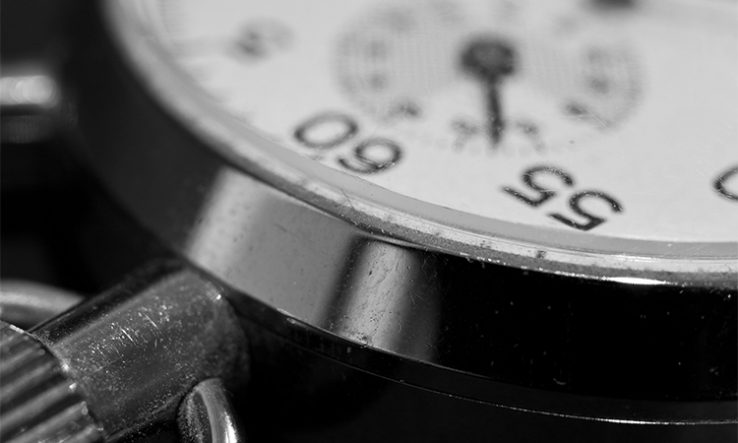 Last-minute bids can succeed, but need careful planning before the late burst of activity

Well, it depends exactly how last minute, and it depends on whether your approach is controlled or chaotic. The mayhem caused by chaotic last-minute applications is one good reason why most universities don’t permit them, and often have strict timescales for proposal preparation and approval. A second reason is that the chances of success are very, very low. Chaotic last-minute applications are almost always a waste of everyone’s time.

However, some of the stricter timescales and notice periods imposed by some universities can be counter-productive. Provided an application is appropriately planned and controlled, why wouldn’t you want to use as much of the available time to produce the strongest possible application? After all, academic work patterns tend to be lumpy, moving from intensive focus on one task (and deadline) to the next: finish the marking by date X, then turn to revisions on the paper by Y, leaving enough time to write the grant application by Z. The idea that grant proposals will develop in a linear and regular fashion between call launch and deadline is just wrong. The bulk of the work—or at least the writing—will be done in the final few weeks. That’s pretty much inevitable.

A quick and obvious point to make is that literal last-minute applications are a terrible idea. For obvious reasons. Online submission systems can fall over, your internet connection can fail, there’s no time for checks—never mind proper internal review—and little slack to deal with unexpected issues. Don’t do it to yourself.

Your institution will have its own policies, but my view is that normally being ready for submission by close of play the day before a late afternoon deadline, or at a push in the first few working hours of deadline day should be fine. This may vary depending on how busy your support team is, particularly if there are multiple bids for the same deadline or multiple deadlines on the same day, which is very common.

If you want to use as much time as is available, your approach must be controlled. Paradoxically, it takes preparation to be able to successfully bring an application to fruition in a short space of time.

Here are seven elements of that preparation that need to be completed before you attack the main body of work for your (relatively) last-minute bid:

1. Relevant people at every university involved know that your bid is coming. Research administrators preparing costings, research managers carrying out detailed checks or giving last-minute feedback, heads of school giving approval and central research staff signing off. All these people can and will block out time and work quickly because they want you to succeed, but only if they know your bid is coming in good time.

2. You’ve had a sense-check discussion with your research development manager to make sure that the scheme and funder is right for your idea. Ideally you should also have had time for comments and feedback on early drafts.

3. Application requirements have been thoroughly checked for anything that takes time and planning to arrange. I call this ‘minesweeping’: checking to make sure there’s no unexploded ordinance that could sink the bid at the last minute. Such explosives may include requirements for letters of support from the pro-vice chancellor research, sign-off from the tech transfer office, letters or other documents from project partners, or checks with HR for any bullying or harassment complaints. These can be hidden away in the ‘notes for applicants’, and your research administrator or manager will be able to identify them and sort them out for you. The less familiar the funder—for you and your institution—the more important the minesweeping.

4. The idea is more or less complete, even if the application is not. There’s a huge difference between ‘writing up’ a well-developed idea and fitting it into the application requirements and trying to define and scope out your project as you write it. The process of writing the application forces clarity—or at least it should—so it’s almost inevitable that writing it up will expose unclear or underdefined areas that need clarifying or pockets of stray fudge that need unsticking. But you can’t complete the summary section of the application form if you don’t know what you’re summarising.

5. Your partners are on board. That means they have bought into the project and will provide you with what you need from them in terms of letters of support and so on. Remember: all organisations need time to produce a good letter of support.

6. You’ve had some external input from senior academic colleagues. Ideally this will be from a formal internal peer review process, but if not, from informal discussions or comments on a concept note or draft outline.

7. You’ve left time for final checks. These will include checks that all the documents are present and correct and in the right format and, closer to deadline, time to sleep on a complete draft and review it fresh in the morning—one final readthrough.

Fortunately, most researchers, and certainly grant-winners, do follow this planned approach. But those who don’t—the ‘agents of chaos’—can wreak so much havoc for so little reward that institutional rules end up getting written to attempt to regulate them, rather than to empower those who write controlled last-minute bids. I tend to think that a better approach to dealing with the agents of chaos is to tell them that their approach is a minority one and seldom if ever leads to success.

If you have ‘agent of chaos’ tendencies, remember that your research support team are unlikely to be twiddling their thumbs awaiting your genuinely last-minute call. They’ll have a full slate of other applications that they’re carefully project-managing through to submission and may not have the capacity to support your bid. If you don’t notify your research support team that you’re planning to apply until it is almost too late, you may be forcing them to choose between your application and someone else’s. Your research support team would far rather be forewarned about potential applications that don’t come to fruition—this happens all the time, no one will judge you negatively—than not be told about one that does.

The list of features of a controlled approach may look long, but really it’s just about carving out enough time early enough to look at the practicalities and to form a plan intensive and effective work later on and, then secondly, letting colleagues know you intend to apply. That way, you can still enjoy the creative maelstrom brought about by putting the finishing touches to your bid at three in the morning, but also give it a fighting chance of actually getting funded.

Adam Golberg is research development manager in the faculty of social sciences at the University of Nottingham. He tweets as @Cash4Questions and blogs at socialscienceresearchfunding.co.uk