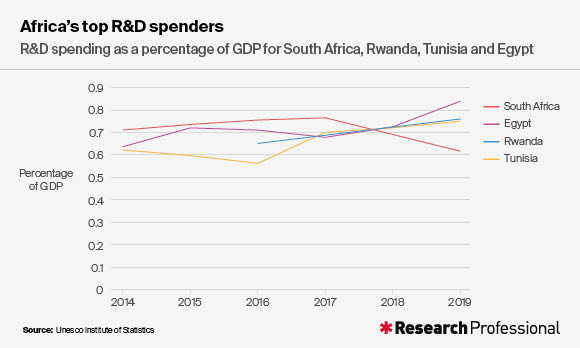 South Africa has dropped to fourth place on the African continent in terms of its spending on R&D as a proportion of GDP.

The news comes less than a year after South Africa’s National Advisory Council on Innovation warned the country was losing its position as the continent’s leader in research.

The country spent 0.61 per cent of its GDP on R&D in 2019 according to data added this month to a United Nations Educational, Scientific and Cultural Organization database.

Egypt’s spend increased to 0.96 per cent in 2020. However, it is the only country of the four to have reported for that year so far.

Best of the rest

Three other African countries added data for 2019, 2020, or both: Mali, Mauritius and Burkina Faso.

No African countries reach the continent’s target, adopted by heads of state in 2007, of spending 1 per cent of GDP on R&D.

In a 1 June news release, Unesco advises against reading too much into increases in proportional R&D spend for 2019 and 2020.

“These increases are not necessarily due to increased investment in R&D during this period but because of substantial decline in GDP, where growth in R&D investments have outpaced the growth in national economies,” it says.

It adds: “This suggests for a cautious interpretation of change in R&D expenditure as a share of GDP within the context of the global pandemic.”

Some countries have also added data on how many researchers they have per million inhabitants.

As with R&D spend as a proportion of GDP, this is lower in Africa than in most other world regions. Nevertheless, a handful of countries report growth in this number.