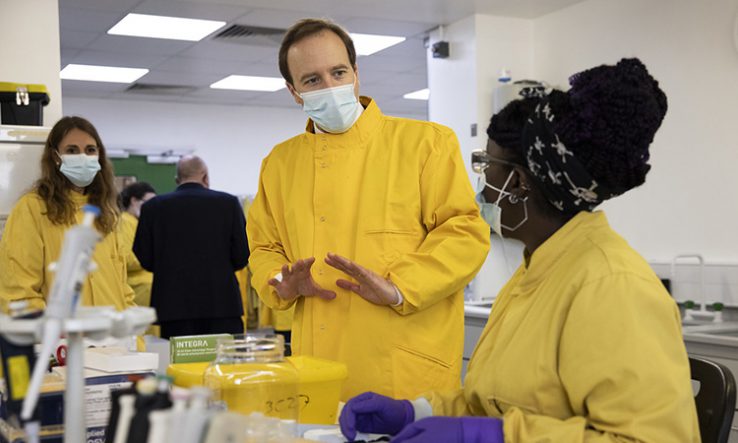 UPDATE 18/10—Just days after the appointment was announced, Matt Hancock’s UN appointment was cancelled. “The UN have written to me to explain that a technical UN rule has subsequently come to light which states that sitting members of parliament cannot also be UN special representatives,” he said in a statement to the media

African scientists on Twitter have reacted with dismay to the news that Matt Hancock, the United Kingdom’s former health secretary, has been appointed as a United Nations envoy to Africa to help the continent rebuild after Covid-19.

Critics questioned the unpaid appointment after a recent UK parliamentary inquiry labelled the UK’s Covid-19 response as one of the country’s worst public health failures. Hancock resigned from his post in June this year after being filmed breaching social distancing rules by kissing an aide in his office.

African scientists took to Twitter to decry his appointment.

“This is so tone deaf, beyond arrogant that they think we in Africa need Matt Hancock to help 1.3 billion people recover from the pandemic, when he couldn’t manage the one in the UK!!” exclaimed Ayoade Alakija, co-chair of the African Union’s African Vaccine Delivery Alliance, on the social media platform.

Tom Moultrie, a demographer at the University of Cape Town, who has tracked South Africa’s excess deaths during the pandemic, tweeted that the move “beggars belief, and boggles the mind”. He asked, sarcastically, whether “the UN could not have chosen someone *from* Africa as its special envoy to the continent”.

Other scientists on Twitter asked what Africa had done “to deserve this”, given Hancock’s track record in the UK. “Africa has too many challenges. Do not bring another failure!” tweeted John Mugabe, a science policy expert based at the University of Pretoria, South Africa.

Marc Mendelson, head of infectious diseases and HIV medicine at Groote Schuur Hospital in Cape Town, South Africa, tweeted that the move was “right up there with appointing [former Zimbabwean president Robert] Mugabe as a [World Health Organization] goodwill ambassador in 2017”.

Hancock posted his letter of appointment from the United Nations Economic Commission for Africa on 12 October. This details his job as a special representative on financial innovation and climate change, with a focus on post-Covid-19 economic recovery.

“This role will support Africa’s cause at the global level and ensure the continent builds forward better,” reads the letter signed by Vera Songwe, under-secretary general of the UN and executive secretary of the UN Economic Commission for Africa.

“Your success on [sic] the United Kingdom’s response to the Covid-19 pandemic and the acceleration of vaccines that has led the UK to move faster toward economic recovery is one testament to the strengths that you will bring to this role,” she wrote.

Hancock wrote back to Songwe on 7 October, accepting the appointment. “It is critical that we seize this moment to ensure Africa can both strengthen its economic recovery and the sustainability of its development,” he wrote.