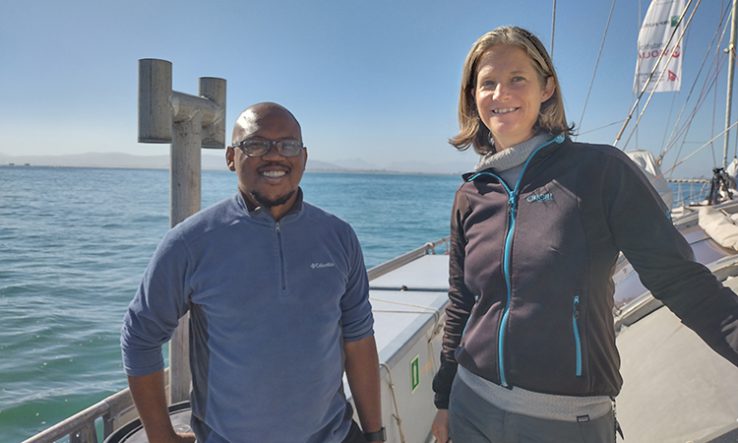 Two South Africa-based microbial ecologists are preparing to pick up the scientific reins of French research schooner Tara for the next few months as the vessel sets sail along Africa’s west coast.

Rocke will lead the cruise’s 13th leg from Cape Town to Namibia, leaving at the start of May. This will focus on the Benguela current that sweeps up the coast, taking special care to sample areas where nutrients from cold upwellings aggregate and cause algal blooms.

“This is my first experience as chief scientist on a research trip, which is both exciting and horribly nerve-racking,” says Rocke. South African scientists have been involved in the project’s design, including setting priorities for the sampling off the African coast.

The 34-metre schooner is equipped with three labs and collects and analyses samples from the air and at various sea depths. A one-stop shop for marine microbiome research, it can gather data on anything from salinity and currents to microscopic marine life, pollutants and viruses.

Cape Town and Pretoria universities, alongside South Africa’s Council for Scientific and Industrial Research, are the only African partner organisations participating in Tara’s Atlantic voyage. The other partners are in Europe (mostly in France, Italy and the United Kingdom), as well as in Brazil and Chile. A total of 200 scientists are involved in the project, which is funded by the European Union.

Makhalanyane will lead the onward leg from Namibia to the Democratic Republic of the Congo. Tara will enter the Congo river to see how nutrients and pollution disperse into the sea. The vessel will also study the mouths of the Orange and Senegal rivers.

South Africa’s participation in the partnership dates back to 2014, when the country’s Department of Science and Innovation started talking to its European counterparts who were keen to study the South Atlantic.

“Of course, they couldn’t just come and do that work without involving African scientists,” Makhalanyane says. “So at that point, we got together and developed a science plan.”

In a third African leg Tara will take measurements along the coasts of Gambia and Senegal. It is expected to reach Senegal by September, after which it will journey back to Europe. The chief scientist of that journey has not yet been chosen.

For Rocke, the most exciting aspect is that so much different data will be gathered at once, allowing her and other scientists to probe deeper than ever before into how the South Atlantic microbiome functions and drives the ocean ecosystem.

“There’s research that’s focused just on bacteria, or just on viruses, or just on plankton. But it’s so important to look at everything at the same time, because everything is interconnected,” she says.