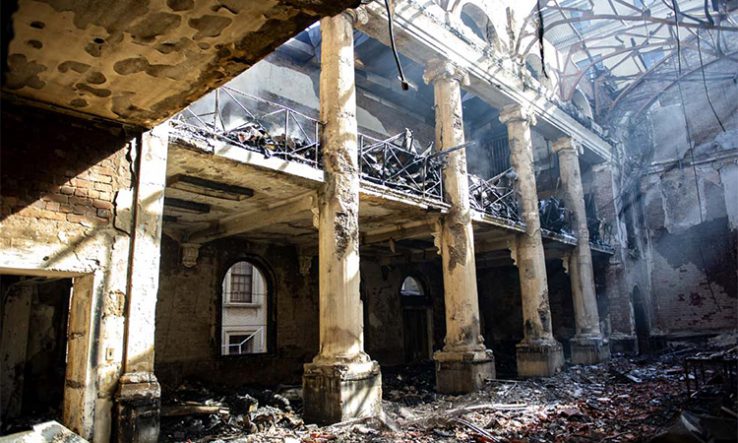 But 19th century watercolours among treasures rescued from inferno

Around 70,000 books, 3,500 DVDs featuring historical film, and government documents from across Africa were destroyed on 18 April when a runaway veld fire torched a library building at the University of Cape Town.

The 1930s building housed the university’s African Studies Collection, and held many treasures from South Africa and elsewhere in Africa. Much loved by students and academics, it contained collections used for gender studies, media studies, HIV/Aids research and African languages studies.

The fire “destroyed the Jagger Reading Room, gutting its roof and destroying the galleries, adjacent stores and offices,” vice-chancellor Mamokgethi Phakeng wrote in a message to students and staff on 21 April.

Relief over survival of rare archive

Some treasures were saved when the fire triggered automated shutters that closed them off from the reading room, though there may have been water damage to rescued books and artefacts.

But the Bleek and Lloyd Archive in the basement escaped intact. It includes 19th century watercolours of animals and plants painted by the Cape’s Indigenous inhabitants. “I know you will all share my relief and pleasure and joy that this astonishing treasure, the love of many of our academic lives, has survived the fire,” said Pippa Skotnes, director of UCT’s Centre for Curating the Archive.

The library was one of four buildings to suffer heavy damage in the fire, which began in a nearby forested area—possibly by an abandoned cooking fire—and was fanned by hot and windy conditions.

The Pearson building, which houses the botany department, was also severely damaged. Its Plant Conservation Unit, on the top floor, was totally destroyed. But the unit’s laboratory and its dangerous chemical survived—to the relief of researchers who saw photographs of their unit in flames on social media. A large, historically significant herbarium in the building was spared both fire and water damage.

The two other heavily damaged buildings were student residences, which probably will take months to repair. “We will make alternative arrangements for those residences deemed unsafe due to fire damage,” Phakeng said.

The damage could have been a lot worse but for the “world-class” fire crews who battled to contain the flames, says Vincent Hare, a palaeoclimatologist working in UCT’s archaeology department, which escaped the fire.

He said he was “left with a deep impression and feeling of appreciation” for the firefighters. “This thing moved fast. My PhD student was in the lab at the time, and she was safely evacuated, along with thousands of others, without loss of life,” he said.

Classes were suspended this week to allow recovery operations on campus. “We will reopen our academic buildings as soon as possible and will issue instructions for returning when it is safe to do so,” said the deputy vice-chancellor for research, Sue Harrison, on 20 April.