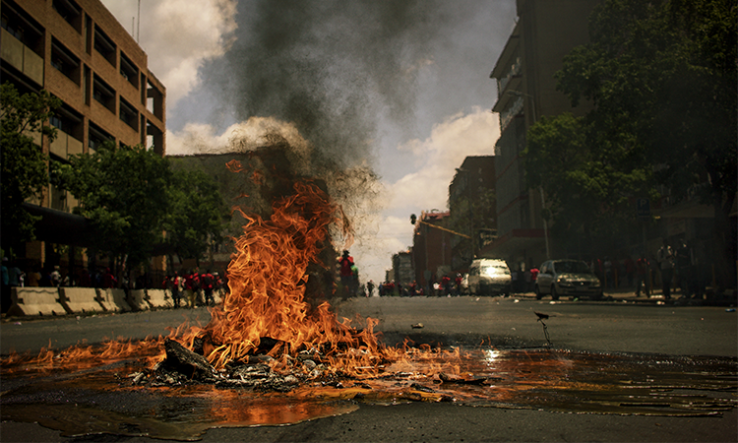 “The country is burning, the universities are quiet,” warns senior university figure

South African universities should rekindle an activist mentality in order to have an impact on the socio-economic crises facing the country, academics have urged.

Nolitha Vukuza, a senior executive director in the vice-chancellor’s office at the University of Johannesburg, said academics have stopped “making noise” when something goes wrong. “It is almost as if universities are captured. The country is burning, the universities are quiet,” she warned.

Vukuza is a former representative of the Department of Higher Education and Training on international bodies including the European Union and Unesco. She spoke during a webinar on 13 July hosted by UJ on reimagining universities as tools for equality.

The meeting coincided with widespread unrest in the KwaZulu-Natal and Gauteng provinces, partly in protest over the imprisonment of former president Jacob Zuma for contempt of the country’s apex court. President Cyril Ramaphosa deployed the army on 12 July in an attempt to quell the violence. The unrest has halted some research activities at the University of the Witwatersrand, and interrupted vaccination programmes in the two provinces.

Vukuza said that universities used to be part of solutions to the kinds of problems currently afflicting the country. “We do not have an activist university. We should tell the president what is wrong and bothers us: we have a right to as academics,” she said.

She said that activists of the 1976 generation are now in influential positions but there is a “dislocation and disconnect between us then and us now”. The 1976 movement protested against an apartheid-era decree to use Afrikaans as the language of instruction. The widespread protests culminated in the Soweto massacre of 16 July 1976.

Mcebisi Ndletyana, an associate professor at UJ and a political analyst, told the webinar that South Africa needs to rethink both universities’ role and curricula: “It is clear that the curriculum does not meet the normative needs of our society. We need to expose the university community to history.”

In order to do so, Black voices and African history should be incorporated into universities’ curricula, which have become “frozen”, Ndletyana argued. This should not be a “crass afrocentricity that rejects everything Western”, he said, but a drawing in of all kinds of knowledge.

Ndletyana argued that universities should expose natural or “hard” science students and engineers to the social sciences.

“We were in a rush to build engineers. Our whole thing was we needed to grow our economy, that people were just mechanical beings without a consciousness,” he said. Ndletyana argued that exposing scientists and engineers to social science ideas such as history, prejudice, poverty and ethnicity would help them better utilise their skills.

“You can only understand the country if you are aware of the history of this country, you are able to make better sense of the world around you beyond the technical skills,” he said.

Vukuza agreed. She said it is not a question of specific disciplines but of equipping scientists with empathy and interpersonal skills that enable them to see “the other” and to be democratic citizens.

A new kind of university

Vukuza and Ndletyana said South African universities are still hamstrung by the past. Vukuza, who was involved in drawing up a government green paper on transformation in higher education, said that universities must be re-thought in order to meet national needs.

She said universities are still modelled on old lines. South Africa needs a new kind of university with “Ubuntu as a founding principle not a canvas or a patch”, she said. This would cancel out the old system that she said is based on inequality and intolerance rather than as a tool for justice and equality.

“We should call for a new university that is based on our purpose, on who we are and what we need, on what we think are the problems we face,” she said.

Barney Pityana, a former vice-chancellor of the University of South Africa, warned the webinar that transforming universities will be an arduous task as they are “very stubborn things”.

According to Pityana, society is often unsure about what it wants from universities, resulting in a series of conflicting and contesting expectations.

“We don’t clean up, we just keep piling on expectations. It takes a lot of courage to do the spring cleaning that needs to be done,” he said.