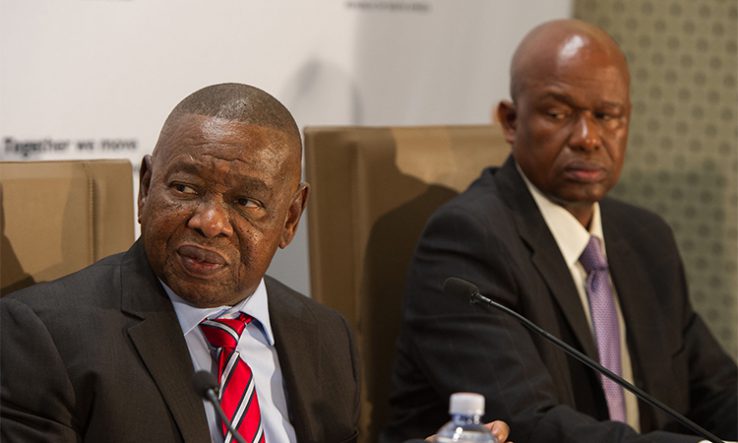 The outgoing director-general of South Africa’s Department of Higher Education and Training, ﻿Gwebinkundla Qonde, ﻿has been put on “precautionary suspension” amid questions over expenditure from the auditor-general.

News of the suspension of Qonde (pictured right), came in a 23 July statement from science and universities minister Blade Nzimande (pictured left), citing “a disclaimer audit opinion by the Auditor-General of South Africa”. This is when an auditor distances itself from providing an opinion related to financial statements, often because they have not seen enough evidence to support accounts.

Qonde has been suspended pending a “forensic investigation” into the National Skills Fund (NSF), the DHET said.

The NSF falls under the DHET. It funds bursaries and scholarships in areas identified as national priorities, leadership and skills programmes, and workplace-based training. It is funded by skills development levies paid by companies.

At the time of his suspension, Qonde was nearing the end of his appointment after more than a decade in the post. The DHET advertised its director-general position in April. Research Professional News contacted Qonde for a comment, but did not receive a reply in time for publication.

The DHET statement did not specify the nature of the “disclaimer audit opinion” which precipitated the suspension. However, the Auditor-General of South Africa detailed some of its concerns about the National Skills Fund’s accounts in a sitting of Parliament’s public accounts committee on 12 May.

The national auditor’s gripes with the skills fund at that meeting included insufficient evidence of expenditure and a lack of internal financial controls. The NSF chief executive, Mvuyisi Macikama, denied wrongdoing on the part of the fund, but admitted it had struggled to gather all the documentation required by the auditors.

In a subsequent meeting of the same committee on 18 May about the NSF, science and higher education minister Blade Nzimande said that Qonde was the accountable officer at DHET for the NSF. Nzimande said he had been concerned about the “deteriorating state of affairs at the NSF for some time”.

Nzimande has appointed the director-general of the Department of Science and Innovation, Phil Mjwara, to cover Qonde’s duties with immediate effect. He urged DHET staff “to fully cooperate with the acting director-general”.

In June, Nzimande said he was negotiating with the skills fund to expand its role to directly support research at universities.