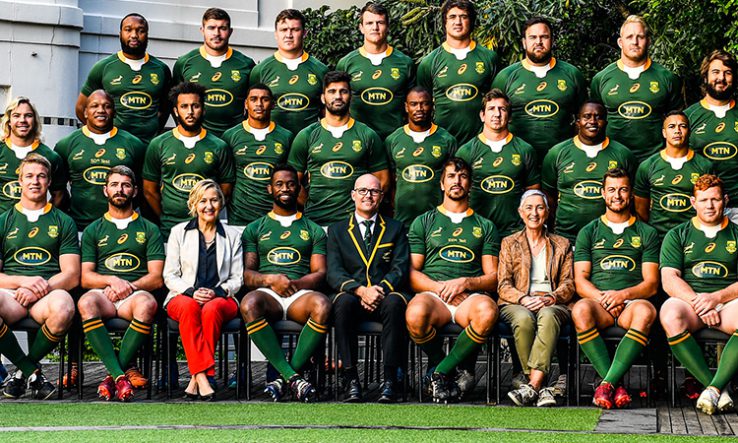 Two scientists who led South Africa’s first Covid-19 vaccine trial were honoured by the country’s national rugby team ahead of its match against Wales last weekend.

Glenda Gray, president of the Medical Research Council, and Linda-Gail Bekker, director of the Desmond Tutu HIV Centre at the University of Cape Town, sat with the squad in the traditional pre-match team photo before the clash in Cape Town on 16 July.

“It was awesome to meet the squad. They are my heroes, and for them to honour us was very special,” Gray (pictured, bottom row, left) told Research Professional News. She also highlighted sport’s “critical” role in promoting healthy living.

About the Springboks, she said: “They are good advocates for health. They are also important to highlight issues such as cancer, cancer awareness, infectious diseases, and addressing vaccine hesitancy. They are role models and are important influencers for health issues.”

Springbok coach Jacques Nienaber lauded the two scientists for their commitment to fighting the pandemic and assisting South African sport through the height of the Covid-19 crisis. If it hadn’t been for vaccines, the team would not have been able to play in, let alone win, their three-test series against the British and Irish Lions last season.

“The pre-match photograph is a very special occasion for the match-day squad and to have them join us is a small gesture to show how much we appreciate their contribution to the team and nation,” Nienaber said in a statement.

Gray added that the team invited her and Bekker to watch the game live, a first for her. “Usually, I only watch on TV, so this was especially special to be invited to watch the game.” The Springboks won the game.

Last year, South African president Cyril Ramaphosa marked International Women’s Day by honouring Bekker and Gray for their contribution to the fight against the pandemic.