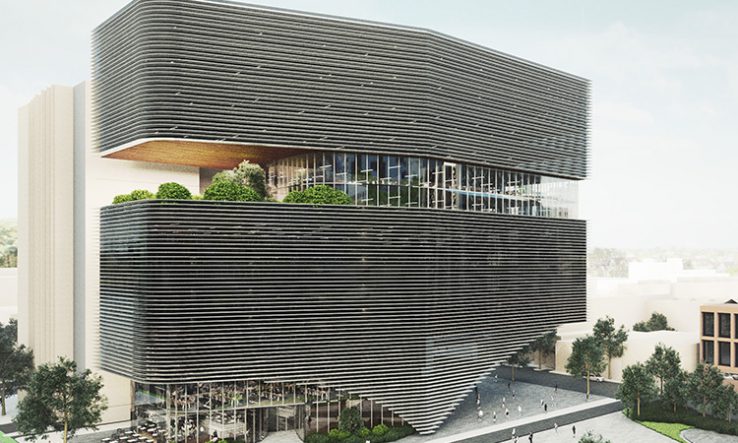 The proposed Australian Institute for Infectious Disease in Melbourne has received an additional A$245 million in Victoria’s state budget.

The University of Melbourne, the Burnet Institute and the Doherty Institute, all partners in the proposed centre, welcomed the announcement of extra money, saying it would help “future-proof” Australia against pandemics.

The centre, the proposed design of which is pictured above, will be built in Parkville and is expected to have more than 1,000 staff and students, including medical and pharmaceutical researchers. The Victorian government committed an initial A$155m in 2020, and partners in the project will spend another A$250m. The Burnet Institute will relocate to the new centre.

University of Melbourne vice-chancellor Duncan Maskell said the centre would “enable the co-location of vital research expertise and infrastructure, some of which is not currently available in Australia, and will contribute to a national infectious diseases knowledge network and drive deeper pharma engagement in achieving better public health outcomes”.

The state was originally seeking federal backing for the centre, but none has been forthcoming. A statement from the Doherty Institute said the backers were seeking philanthropic support.

Mental health research in Victoria, meanwhile, is expected to get a boost from an A$800m-a-year payroll tax contained in the budget. The tax will fund the implementation of all the recommendations of the recent Royal Commission inquiry into mental health. The commission recommended the creation of a collaborative centre for mental health and wellbeing, where researchers could work with mental health advocates.

The mental health centre’s focus is expected to be on translating research findings into real-world outcomes and helping researchers to set priorities. The government is yet to announce the exact form it will take.

Elsewhere, the budget, which was delivered on 20 May, confirmed A$50m in funding previously announced to help create an mRNA-capable manufacturing plant in Victoria.

On 21 May, the federal government opened an eight-week bidding process for potential operators of an mRNA plant. Its criteria include demonstrated intellectual property in mRNA research and prioritisation of Australian government purchasing for any products, such as Covid-19 vaccines.

Budget papers also revealed the priorities of the A$2 billion Breakthrough Victoria Fund, which is yet to release its investment plan. The focus of the research and innovation fund will be health and life sciences, “agri-food”, advanced manufacturing, developing a clean economy and digital technologies.

The budget included an update on Victoria’s Higher Education State Investment Fund, which has A$350m to spend on joint projects with universities. The fund has so far supported a joint University of Melbourne genomics centre in partnership with the gene company Illumina and contributed A$23m to a set of “digital and bio innovation” product development hubs based at La Trobe University’s Bundoora campus.