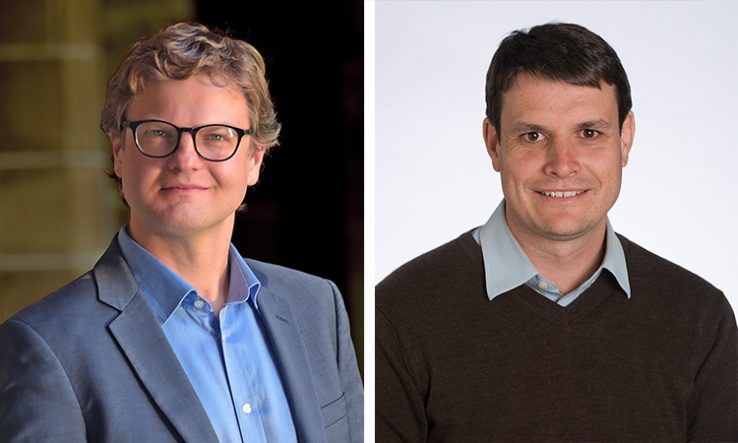 Australian universities are facing a challenge comparable to the “stagnant” years of the mid-1970s, a seminar at the University of Melbourne’s centre for the study of higher education has heard.

This year may usher in “a new era”, with the possibility of less focus on research and more difficulty in staff progression as the effects of Covid-19 and government policy changes in 2020 take effect, researchers told the seminar.

Gwilym Croucher (pictured, left), a lecturer in higher education policy and management, said that higher education’s relationship with government had “fundamentally shifted” in recent years. As universities had become less reliant on government funding, they had started to behave more like businesses and had become less responsive to policy oversight, he said. “It has made it much more difficult to direct the system.”

Croucher said that last year’s Job-Ready Graduates legislation, which from this year increases fees in some subjects and reduces them in those that the government deems desirable, could have unpredictable effects. “Whether the government can effectively change student demand by changing the amount that they’re funding…on the balance of evidence is unlikely. What it does to universities is more of an issue.”

Session facilitator Vin Massaro, an honorary professorial fellow at the centre, noted that despite an unusually large round of legislative reforms in 2020, the government could not be sure that its objectives would be met, because of the independent and businesslike way in which universities now operated. “Nor can it be sure that you don’t find yourself in a situation where every university makes the same decision to, I don’t know, stop teaching science because it’s too expensive,” he said.

“My impression this time round has been that there has been a more immediate reaction from several universities to start closing things because they can see that they’re not going to get those students. And what’s surprising is the number of places that are actually closing departments or offerings in precisely the areas that they were going to promote—and I think that that may cause an issue.”

James Waghorne (pictured, right), a researcher at the centre, said that the loss of international students threatened to create stagnation in higher education. He said the crises of last year had also accelerated a trend towards policy being made without discussion. “This public conversation about universities has eroded quite considerably and I think we’ve seen this really starkly this year under the Covid crisis, because we have seen discussions on ad hoc committees that were established to reach agreements and this has really made the government of the sector much more a behind-closed-doors activity, a non-public thing.”

Another reform last year means that universities must prove the amount and quality of their research. This could threaten the assumption that all staff undertake research, Waghorne said. That “postwar idea” has “grown to be absolutely fundamental”, he said, “and it is important for the universities in their international standing and their international outlook. Any attack on that is something that we need to be very wary of. We have to defend it on the basis that this is something that has been hard-won.”

Croucher added: “You’ll always have academics there that are quite active researchers. Now whether or not the expectation will be that all academics have a large research profile, whether that will be maintained, that I’m more doubtful of. I think that conversation’s really been opened up.”

Waghorne and Croucher recently published a history of Australian universities.