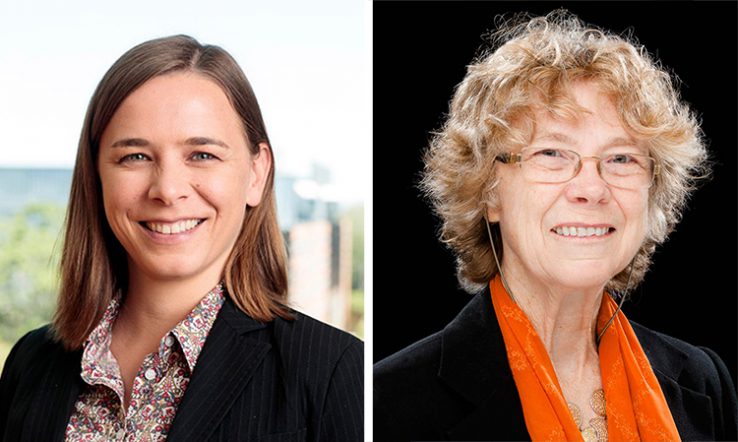 “Blurring between life and work has deep impacts” on women in Stem, says Australian academy

The Covid-19 pandemic has worsened the situation for women in science, technology, engineering and mathematics, a report from the Australian Academy of Science has said.

Caring responsibilities, greater teaching loads, inflexible working conditions and problems caused by the breaking down of boundaries between work and home have affected women in Stem, as have reduced access to research facilities and other workplaces, the academy said.

Only 72 per cent of women who participated in the academy’s survey said they expected to remain in Stem fields in the short term.

Lisa Harvey-Smith (pictured, left), Australia’s ambassador for women in Stem and an astrophysicist and professor of practice in science communication at the University of New South Wales, said the report showed that “the pandemic has exacerbated pre-existing gender inequities in the Stem workforce”.

Speaking at an online seminar to launch the study, Harvey-Smith said that teaching duties “was an area where women in particular were burdened”. The study showed that teaching work was “less valued in terms of professional development and reward”, she said.

Cheryl Praeger (pictured, right), who chaired the report’s steering committee, said that four main ways had emerged in which the pandemic had affected women. First was the professional context, including changes and limitations on work circumstances. Women’s career prospects had been negatively affected, she said.

The “challenging” of boundaries such as those between work and caring responsibilities was also found to have had a major impact.

“Online teaching and learning came with a demanding workload, long working hours without switching off, and a lack of social interaction. These activities were mainly conducted by early and mid-career researchers, who are usually disproportionately women,” the report said. This was made worse by additional home responsibilities during lockdowns, such as remote schooling of children.

Praeger said a third effect of the pandemic was the impact of wider social changes, which had created “mental health challenges” for women. As well as causing greater anxiety, “Covid-19 is creating a situation where women in Stem fields might be more marginalised”, the report said.

Finally, Praeger said, the report identified common themes across the 31 countries in the study, as well as different challenges. Access to the necessary information technology facilities and the internet, for example, was easier in some countries.

Praeger said that “overwhelmingly, women want to stay in Stem” but need help with that, through “developing flexible workplaces for all genders, and flexible ways to measure productivity”.

“The blurring between life and work is having deep impacts,” she said, and employers need to acknowledge these impacts, for instance by providing accessible and affordable childcare and better support for digital access.

Speaking at the seminar, Judith Zubieta of the National Autonomous University of Mexico said the working group was “not very surprised by some of the big findings of this project”.

“It was really sad to find that…the top career expectation for these women is to be in the same or a similar role. We’re not talking about promotions or doing any better—just staying the same.”

Some women also reported positive impacts of the pandemic, such as greater flexibility. One university communications manager said: “Covid has delivered more benefit to me as a full-time working mother than a decade of industrial relations and government policy.”

The report, released on 13 July, surveyed more than 1,000 workers, most of whom were women, over a three-month period to May 2021. The Australian-based survey covered Asia-Pacific countries including New Zealand and Malaysia, and Pacific Rim countries such as Chile. More than half the respondents had at least a doctoral qualification. Smaller group workshops were also conducted.

It was supported by funding from the Australian government.