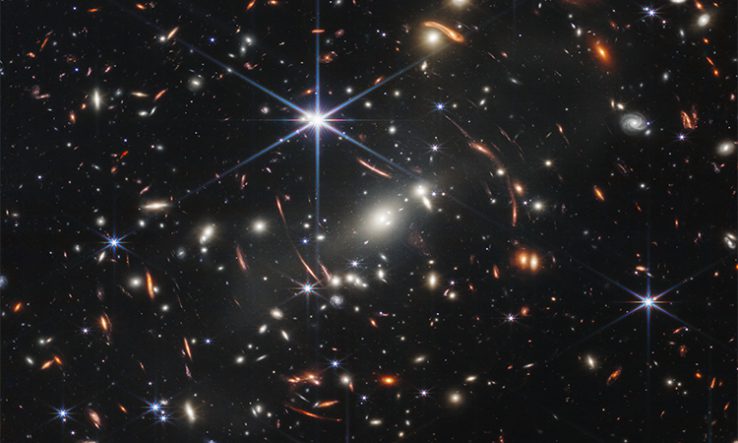 James Webb Space Telescope is a joint initiative of Canada, Europe and the United States

Politicians and scientists have hailed the first image from the James Webb Space Telescope, a €10 billion collaboration between the Canadian, European and US space agencies to replace the Hubble Space Telescope in providing unprecedented images of the universe.

The first image (pictured) from the JWST was unveiled by US president Joe Biden on 11 July, after the three agencies spent months positioning the telescope a million miles from Earth and opening and testing its various delicate instruments following its launch in December last year.

Nasa administrator Bill Nelson said the image was “the deepest, sharpest infrared image of the distant Universe so far” obtained. He said researchers using the JWST would be able to tell whether distant planets were habitable, and that the telescope was going to be able to answer scientific questions that have yet to be formulated.

Macarena Garcia Marin, an instrument scientist at the European Space Agency, agreed that the image was just a “first glimpse” of what the JWST could do. She said she “can’t help but think of what images and science results are just around the corner in the many years to come”.

The power of joining forces

Leaders of the agencies also said the JWST success shows what they can do when they work together, after they spent almost two decades collaborating on its development.

Esa director general Josef Aschbacher said: “Only with teamwork, dedication and the human drive to push boundaries and explore have we arrived at this historical moment.”

Nelson said the JWST was “just the start of what we can accomplish in the future when we work together”.

Eddie Bernice Johnson, the chair of the US House of Representatives science committee, said she hoped the images provided by the JWST would “inspire an entire generation”.

On the day the image was released, the European Space Agency announced it had created an advisory group to guide its human and robotic space exploration. The 12-person group will provide an independent analysis of the geopolitical, economic and societal relevance of such work, as well as making recommendations, the agency said.

The group includes Anders Fogh Rasmussen, former Nato secretary general and former prime minister of Denmark, as well as economist Mariana Mazzucato, who advised the EU on its research and innovation missions.