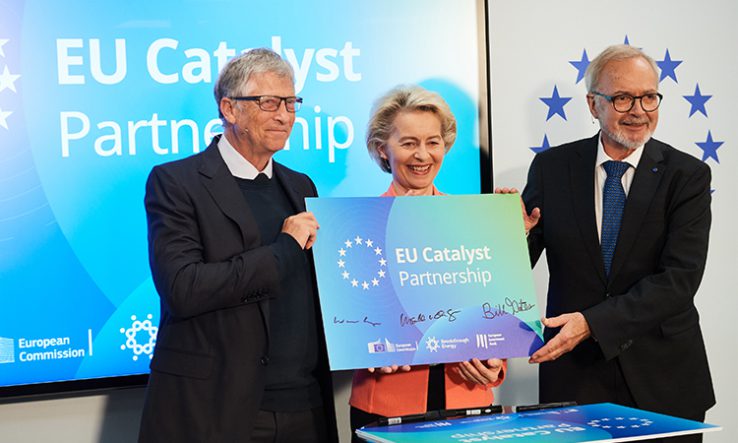 The EU and billionaire businessman-turned-philanthropist Bill Gates have stressed the importance of science and innovation for tackling the climate crisis at the COP26 meeting, as they signed off an €820 million fund for green technologies.

The trio have now signed a memorandum of understanding on a collaboration between the Commission, the EIB and Breakthrough Energy Catalyst, a fund set up by Gates and other private investors to support innovations that could help the world achieve net-zero greenhouse-gas emissions by 2050.

The partnership aims to invest €820m between 2022 and 2026 in EU-based projects, to “accelerate the deployment [of] and rapidly commercialise innovative technologies” that would help deliver EU environment-policy ambitions, the Commission said. It is one of several that Gates’ Breakthrough Energy Catalyst has forged with governments around the world. In August, Gates announced a $15 billion (€12.9bn) partnership with the United States, and in October he launched one worth £400m (€470m) with the UK.

The European Breakthrough fund—dubbed the EU-Catalyst partnership—will target four technology areas: clean hydrogen, aviation fuels, direct air capture of greenhouse gases, and energy storage. It will “target technologies with a recognised potential to reduce greenhouse-gas emissions, but which are currently too expensive to get to scale and compete with fossil fuel-based technologies”.

Half of the €820m will come from the EU, including via its Horizon Europe R&D programme, and half from Breakthrough Energy Catalyst. Money will be handed out as both grants and investments, and funded projects will have to raise an equal amount from elsewhere.

“The climate challenge requires us to invest in high-risk innovations and to eliminate the ‘green premium’ involved in commercialising new technologies,” said von der Leyen.

She added, “it is only through innovation that we are going to get to our goal of net zero”.

In a press conference, Gates said that partnering with Europe was “the obvious choice” because the continent “is home to the kind of science, engineering and technology expertise we need”.

The first projects are expected to be selected next year, but the fund will need to be enormously effective to make a difference given the scale of the challenge. It is also dwarfed by the EU’s wider plans for funding climate projects.

The €77bn 2014-20 EU R&D programme Horizon 2020 already devoted about 35 per cent of its budget to climate research and innovation, equating to about €27bn. The €95.5bn 2021-27 Horizon Europe R&D programme has a target to spend the same proportion of its budget on climate.

The EU has a total target to spend €540bn on climate from its overall 2021-27 budget and its huge Covid-19 recovery fund.