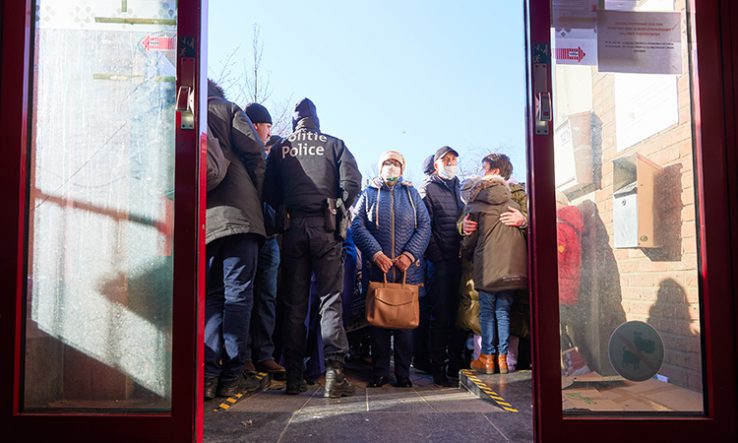 Researchers escaping the Russian invasion of Ukraine have inundated support schemes with applications for help, as they join millions of refugees fleeing to other parts of Europe.

Poland alone has received more than two million refugees from Ukraine, according to the United Nations refugee agency, and research institutions are scrambling to provide what support they can.

Anna Plater-Zyberk, head of international relations at the Polish Academy of Sciences (PAS), said universities in her country are “facing a very, very difficult challenge”.

“We will need international support, this is for sure—support of the European Commission and all our European partners,” she said.

The PAS opened an initial call on 1 March offering 50 three-month stays to Ukrainian researchers, and its 750,000 Polish złoty (€160,000) budget was used up within four days.

Since then, the PAS has raised more funds with international partners, including the National Academy of Sciences in the United States. As of 21 March, $700,000 (€635,000) had been raised from the US, with more contributions expected.

Plater-Zyberk said that even with the help of foreign donors the PAS will only be able to offer between 300 and 500 positions “if we are lucky”.

Other Polish organisations are also planning support schemes. A spokesperson for the National Science Centre, a public funding agency, told Research Europe the funder has prepared a special programme worth 6 million Polish złoty that is awaiting final government approval.

Other countries are facing similar issues, with funders across Europe concerned that their budgets will not be sufficient for the number of displaced researchers now arriving. MEP Christian Ehler, a senior figure in the European Parliament research committee, has appealed to the Commission to heed pleas like those from Plater-Zyberk and set up a dedicated support scheme for those displaced.

“Europe does not have enough funding available for researchers at risk,” Ehler told Research Europe. “We structurally lack the means we need to deliver on the promise Europe’s commitment to academic freedom holds.”

According to the Ukrainian Ministry of Science and Education, in 2021 there were 60,000 researchers and 35,000 support staff in Ukraine.

In France, the government has provided €500,000 for a three-month support programme run by the Collège de France, with a further €300,000 given by the L’Oréal Foundation for female researchers.

Amaryllis Quezada, advocacy officer at the Collège de France, said it estimates it will need €3 million to cope with demand and that it “urgently needs to raise funds to be able to maintain this emergency response”. The group has already received 95 applications—more than it has the funds for.

The Swiss National Science Foundation opened a call on 7 March offering 1m Swiss francs (€973,000) for placements at universities. Matt Kimmich from the SNSF’s international division said the fund was “basically almost gone by the first week of these measures” and that the agency may allocate further funds.

“We’re also talking about things like what happens once the war is over, once infrastructures have to be rebuilt in Ukraine,” Kimmich said.

Similar schemes are open in countries including Austria, the Czech Republic, Germany, Italy and Sweden. Given the acute needs of researchers fleeing Ukraine, most funders are requiring only an eligibility check and a letter of support from a host institution before approving funding.

In Germany, the Volkswagen Foundation has a programme offering 100 placements of up to a year for researchers. Programme director Matthias Nöllenburg told Research Europe he had been receiving applications “every five minutes”.

“We have to be fast deciding upon the applications,” he said.

In addition to short-term funded positions, many funders are also providing further support.

The Czech Academy of Sciences has increased the budget across its subsidiary institutes by 50 million Czech koruna (€2m) in addition to funding 50 fellowships. The institutional funds are meant to support a wider range of people affected by the crisis, including technical staff and families, said David Honys, deputy vice-president of the academy.

“We are catching the first wave of refugees, so we have to take care of as many as we can,” said Honys.