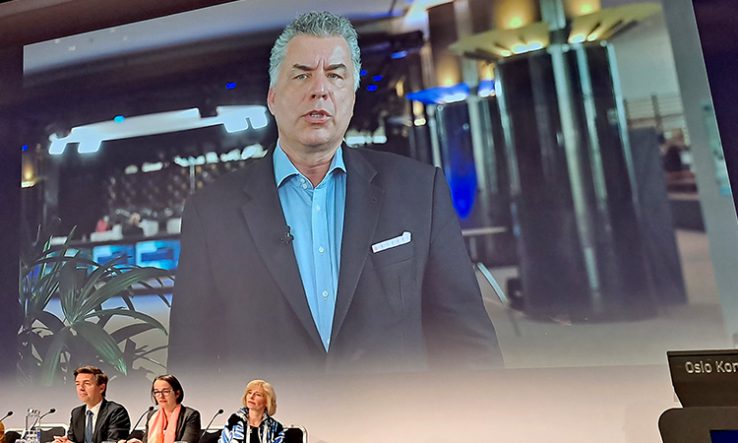 EU R&D policy and funding is increasingly failing to deliver on its promises, in part because the European Commission is too often distracted by chasing new trends, a leading MEP has complained.

Christian Ehler, a senior member of the European Parliament research committee, slammed elements of Commission R&D policy in a video message delivered at the annual conference of the European Association of Research Managers and Administrators.

“I observe a growing tendency, particularly within the European Commission, to overpromise and to underdeliver,” Ehler (pictured top) complained at the event in Oslo on 6 May.

Ehler cited the research and innovation-based missions that set specific goals on topics including cancer and climate change, which have been introduced into the 2021-27 EU R&D programme, Horizon Europe. He said that they “cannot realistically be delivered by research [and], even more so, they can never be delivered by the available funding”.

He claimed that the Commission was “fantasising” and that the plan was “mostly wishful thinking”.

The missions have been allocated up to €1.9 billion from the first three years of Horizon Europe, and the Commission intends them to attract more funding from EU member states, industry and other actors.

Their many goals include “reducing plastic litter at sea, nutrient losses and use of chemical pesticides by 50 per cent”, and “improving the lives of more than 3 million people by 2030” via cancer care.

“It is impossible for Horizon to deliver on the union policies,” Ehler warned.

He also complained that some EU policy priorities “are so dominant that they overshadow all other efforts”, saying that currently this applies to the Green Deal package on environmental sustainability.

For example, the introduction of the ‘do no significant harm’ principle into Horizon Europe, mainly as a way for researchers to voluntarily explain how their projects would not harm the environment, has been “disastrous”, he said. “So far, it has created confusion, at best, and might have discouraged certain researchers from applying, at worst,” Ehler claimed.

In addition, Ehler complained that the EU R&D programme is “constantly [facing] new priorities” because “The Commission, under pressure of what is hot right now, comes up with new initiatives and often they look at Horizon [for them] to be funded.”

He said a recent move to allocate funding from Horizon Europe to the development of microchips was an example of such moves. They “eat away at funding for existing priorities”, he said, adding that this “structurally undermines the ability of Horizon to deliver on the promises made when it was set up”.

Responding to Ehler at the event, Commission official Julien Guerrier (pictured second from left) said: “I think we should find comfort in the fact that every time there is a policy initiative, people come to research, think of research, as a key element to deliver on that question.”

In response to a question from Research Professional News, he said that the proposed allocation of Horizon Europe funding to microchips would not affect the programme’s budget for research and innovation, as any money moved would be replaced with funds unspent from the previous EU R&D programme.

But Guerrier added: “MEP Ehler is right that, at the end of the day, it’s a question of balance between the various priority objectives, and our frustration or difficulty, but the reality we have to live with is that the budget of Horizon Europe is set and is limited. So if we reallocate towards semiconductor research, then of course this is to the expense of other priorities, but this is a policy choice that has to be made.”

In the same session, Silvia Gómez Recio, secretary general of the Young European Research Universities Network, drew attention to what she described as “this extreme emphasis…on trying to have the projects of Horizon Europe have a direct line of impact”. She questioned whether research proposals should be aimed at trying to please politicians.

In response, Guerrier said: “I couldn’t find anything in what you said that I don’t agree with.”