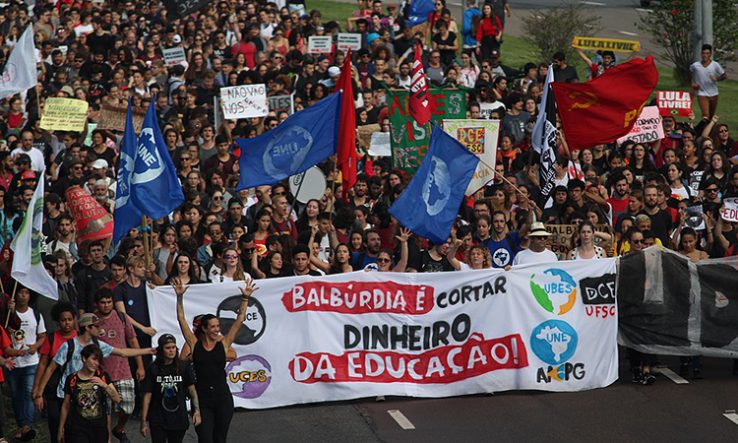 Bolsonaro is disastrous, but the assault on universities began before him, says Arthur Moreira

For Brazilian president Jair Bolsonaro, lying is a crucial political tool. In the 2018 election campaign, he avoided televised debates with the other candidates, reaching voters via—often untrue—messages on social media and WhatsApp.

Bolsonaro won because his message, and its politically incorrect tone, resonates with many in Brazil. However, researchers met his election last October with trepidation.

A government that denies the climate crisis, ignores past and current human-rights abuses, and promotes agriculture and mining in the Amazon, often in land set aside for indigenous people, cannot afford fact-checking and robust science. And sure enough, under Bolsonaro, universities and scientists in Brazil have come under direct attack for challenging his campaign of misinformation.

Perhaps the clearest example was August’s dismissal of the physicist Ricardo Galvão as director of the Brazilian National Institute for Space Research, after publishing data showing that deforestation in the Amazon had risen sharply since 2018.

The attack has also been economic. Brazil’s two main public research funders CNPq, which is part of the Ministry of Science and Technology, and Capes, which falls under the Ministry of Education, had already suffered large budget cuts under the previous president Michel Temer, whose government sought to introduce a 20-year freeze on public spending.

Bolsonaro has continued the cuts. In March, the science and technology ministry had 42 per cent of its budget frozen, potentially leading to a loss of 80,000 scholarships. The education ministry has also seen budget freezes, and is facing a 20 per cent budget cut next year.

Capes is offering almost 9,000 fewer postgraduate scholarships this year compared with 2018, and will have its budget halved in 2020. Some federal universities will see their budgets cut by more than a fifth.

Science and higher education in Brazil are fighting on two fronts. Even before the current government, universities and research had to contend with a political climate of free-market fundamentalism, sceptical of the value of research funding and seeing science and education as a drain on public finances rather than a strategic investment.

A programme unveiled in July, called Future-se, is an expression of this worldview. Devised by the government without consultation with universities, it is being sold as a scheme to attract private funds to universities through,
for example, public-private research partnerships and selling naming rights.

The stated aim is to increase autonomy and self-sufficiency in higher education, and increase business engagement with research. But scientists are sceptical about the capacity for private money to fill the gap left by government. At the University of Campinas in São Paulo, for example—one of Latin America’s top institutions—private funds account for only 1.5 per cent of the total research budget.

Many see Future-se as an attempt to starve and ultimately privatise universities. Recent press reports also accuse Bolsonaro of overriding the appointments process for university rectors, installing his own candidates instead of those voted for by academics.

Higher education’s current struggles are in stark contrast to the situation in the early 2000s. These years saw a general expansion of universities and student enrolment in Brazil, opening up access to public and private universities.

A recent study showed that these policies led to a student body more representative of Brazil’s population. For example, the proportion of students from the richest 30 per cent of the population fell from 82 per cent in 2001 to 51.5 per cent in 2015. Since 2016, this trend has gone into reverse.

Opposition to the Bolsonaro government and its policies is gathering momentum. In May, a group of scientific bodies coordinated by the Brazilian Society for the Advancement of Science launched the Initiative for Science and Technology in Parliament to advise policymakers and broker links between politics and research.

An online petition in support of CNPq has gathered almost a million signatures. Street demonstrations in support of free and quality education took place on 2 and 3 October.

While a repeat of the huge protests against corruption that swept the country in 2013 looks unlikely, there are signs that action is yielding results. In September, 3,182 Capes scholarships were reopened and part of the Ministry of Education’s budget was unfrozen.

Such victories show that resistance is worthwhile, but they are small in comparison with what has been lost. Scientific institutions and capability take decades to build, but can be wrecked in a few months.

Arthur Moreira is a postgraduate student in the Science Policy Research Unit, University of Sussex