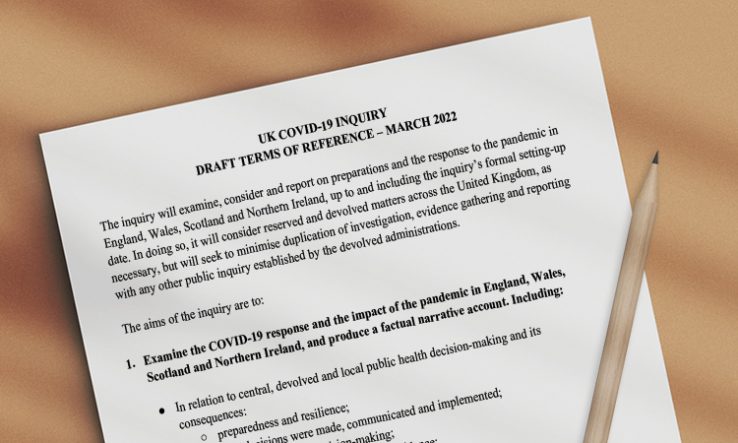 Despite being “at core” of UK’s pandemic response, scientific advice does not feature in inquiry

Failure to include scientific advice and advisers in the scope of the Covid-19 inquiry is a “serious omission”, academics have said.

The terms of reference for the public inquiry into the Covid-19 pandemic, published this month, cover many issues, including preparedness, and the public health and economic response.

The Cabinet Office said the inquiry is expected to “play a key role in learning the lessons from the pandemic and informing the government’s preparations for the future”.

“One of the major concerns of many scientists has been the politicisation of science in general, and of public health in particular,” he said.

“This is, to some extent, inevitable. Science is funded either by industry, looking for a profit; or by the public purse. And that means—by charitable donations, and by the taxpayer. And as soon as money starts to come from the treasury, ministers can influence where it goes; what it is spent on.”

Ideally, he said, such advisers would be “answerable to the people, and expected to provide what they believe to be the best available scientific advice”.

“Instead, however, they are generally employed as civil servants, answerable to the minister.”

Throughout the pandemic a range of issues with scientific advice and how it fed into decision making were brought up, including the composition and secrecy of Sage, the role of epidemic modelling and the use of behavioural science for public messaging, as well as how fit Sage was for long-lasting emergencies.

English also said there has been a longer-term “erosion of the funding for public health, a disinvestment in public health laboratories” and a lack of freedom for disease control specialists working for government agencies to speak out “unless it was to echo the official government line”.

“In a perfect world, these and many other issues would be covered in a public inquiry,” he said. “But it is unlikely that the ministers setting up the enquiry will ask questions, the answers to which will reflect badly on them, or commit them to a public health system they can’t control, or which will cost them more.”

Speaking in a personal capacity, Mark Woolhouse, a professor of infectious disease epidemiology at the University of Edinburgh and a member of the Scientific Pandemic Influenza Group on Modelling, which feeds into Sage, said the interface between scientists and policymakers was “at the core of how the response to the pandemic unfolded in the UK”.

“If we want to understand what happened and why, then we need to understand how that process worked and what it delivered,” he told Research Professional News.

Woolhouse said he was particularly “troubled” by the relationship between scientific advisers and the government in the latter part of 2020, as the second wave of the pandemic was approaching.

During that time, he said, the government was reluctant to impose extra restrictions while scientific advisers were “clamouring in the media for more restrictions”.

“In effect they [the government] resisted these calls and cases kept on going up, hospitalisations kept going up, deaths kept going up until eventually we reached a crunch point where the government felt compelled to introduce the lockdown which they had been resisting.”

According to Woolhouse, who unpicks the pandemic response in his book: The Year the World Went Mad, the second national lockdown would have been “entirely avoidable if government and the scientific advice had been working more in concert than they were at the time”.

“My feeling on this was that we should have done something to arrest the second wave—and that an earlier intervention could be a less drastic intervention.”

When approached by Research Professional News, the Cabinet Office rejected that there was any omission, pointing out that the terms do include “public health decision-making” and “the availability and use of data and evidence”.

A government spokesperson said: “The draft terms of reference clearly states that the public health decisions made, including with respect to the availability and use of data and evidence, will be examined.

They also pointed out that the terms are still in draft form and are under consultation.

“There is now a period of public engagement and consultation which will inform the terms of reference before they are finalised.”

Tom Lawton, clinical director of Connected Bradford at the Bradford Institute for Health Research, said that “claims that the government was ‘following the science’ were frequently used to help reassure a worried public. However, with a lack of transparency on some decisions and a variety of scientific opinions on offer it is important that the inquiry is able to examine the advice offered, who offered it, and how it affected policy.

“I hope that the final terms of reference will rectify this, however uncomfortable it may be for a government which appears to be uncomfortable following the science where it conflicts with a desire for the pandemic to be over.”