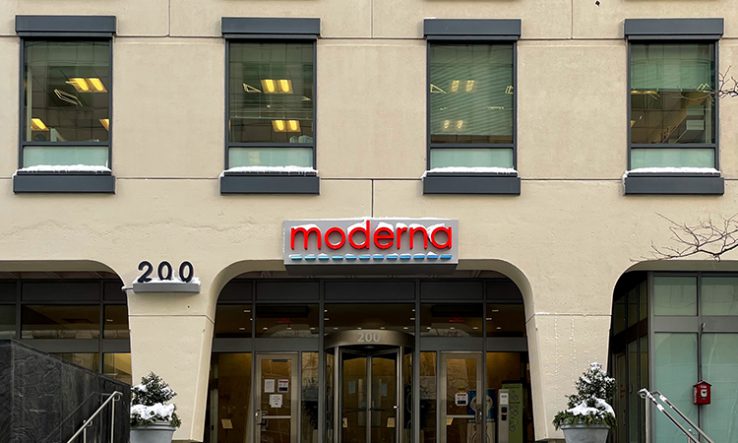 The UK government has struck a deal with the American biotechnology firm Moderna to build a new vaccine manufacturing and R&D centre in the UK.

The mRNA Innovation and Technology Centre is expected to work on mRNA vaccines for a range of respiratory diseases, including Covid-19, the government announced on 22 June.

The government said the centre, alongside a new production facility, would give people in the UK “guaranteed access to Moderna’s Covid-19 vaccine and the ability to produce jabs targeting a range of other illnesses”.

Construction is expected to commence as early as this year with production to start in 2025. The Financial Times said the 10-year deal was worth £1 billion.

“We are bringing supercharged, homegrown vaccines right to our shores,” said prime minister Boris Johnson. “I want the UK to be the brightest and best in research and technology, creating more jobs and securing our economic future.”

Health secretary Sajid Javid said the partnership would “cement the UK’s status as a science superpower, significantly boosting the economy and creating jobs—and it has the potential to unlock the next generation of cutting-edge vaccines to fight diseases”.

He added: “Thanks to this new deal, NHS patients will benefit from scientific breakthroughs and the new state-of-the-art manufacturing centre will boost our ability to respond to the next pandemic by ensuring we’re able to produce vaccines rapidly on our own shores.”

The announcement follows lingering concerns regarding the UK’s vaccine manufacturing capability. In April, the UK’s Vaccine Manufacturing and Innovation Centre in Harwell, Oxfordshire, was controversially sold off to US pharmaceutical giant Catalent after receiving more than £200m in funding from the UK government.

The government also faced criticism over its U-turn in September 2021 on a contract for around 100 million vaccine doses from the French-Austrian company Valneva, which was expected to expand its vaccine manufacturing facilities in Livingston, Scotland.

The government’s chief scientific adviser, Patrick Vallance, said the establishment of the mRNA Innovation and Technology Centre was “great news for the UK’s research and development activities and future capabilities”.

“Rapid, cutting-edge vaccines were vital in the response to the Covid-19 pandemic,” he said. “Developing the next generation of mRNA vaccines will be crucial in boosting our ability to prevent and respond to a wide range of diseases in the future.”