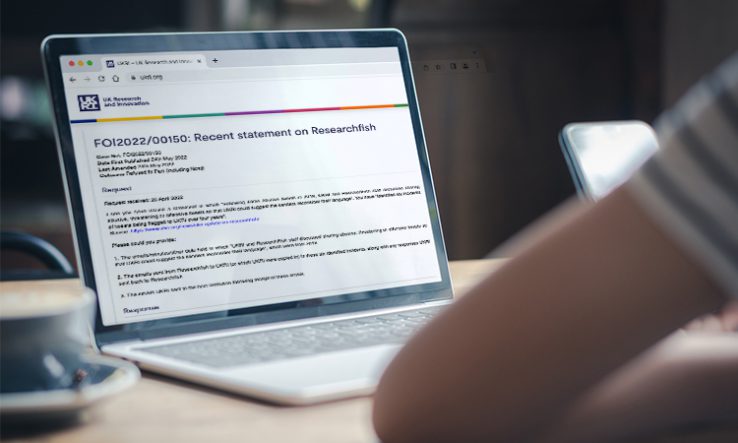 National research funder UK Research and Innovation chased university staff on more than one occasion to take “appropriate action” against academics over comments criticising Researchfish on Twitter, it has emerged.

UKRI has already faced a growing backlash after it admitted that it had encouraged Researchfish to report offensive tweets from academics, many of whom are required by their funders to report their research outputs to the impact-tracking service.

Now, the funder has released a series of emails sent to university staff complaining about the behaviour of their academics, whose names have been redacted. It has also released minutes of its own staff discussing the matter internally and with staff from Researchfish. The documents were released in response to a freedom of information request filed on 20 April.

In an email dated 19 March 2019, for example, a UKRI staff member, writing on behalf of the UKRI Research Outcomes Management Board, writes to an unnamed host institution to flag a tweet sent by a member of its staff, whose name has been redacted.

“The message is offensive to staff at UKRI and Researchfish Ltd (who UKRI have contracted to provide our research outcomes collection service),” the e-mail reads.

It adds that the researcher has since apologised to Researchfish and deleted the offending tweet.

“As such, UKRI will not be taking any direct action,” it says, adding that UKRI has a “zero-tolerance policy to bullying and harassment”.

It then urges the institution to “take appropriate action to ensure that such an incident does not happen again”.

In a similar message, dated 1 February 2021, a UKRI staff member acting on behalf of the Research Outcomes Management Board wrote to an unnamed institution complaining about another offensive tweet. They urge the university to “take appropriate action to ensure that the tweet is deleted and that such an incident does not happen again”.

Eight days later, the staff member contacted the university to follow up on their message.

“UKRI takes this issue seriously and I would appreciate a response and an indication of any planned actions on your behalf,” they wrote.

Another email shows a UKRI staff member wrote to an unnamed institution also on 1 February 2021, complaining about an offensive tweet and urging the university to “take appropriate action”.

On 3 March, they contacted that institution again, urging them to “acknowledge this email and to action in line with your social media policy”.

In a previous statement, dated 19 April, UKRI confirmed a total of six incidents of tweets were flagged to UKRI over four years. In three of the cases, it said UKRI had contacted either the host university or the individual directly. In two cases, the individuals deleted their tweets, and in the third, it said no response was received and no further action was taken. In the other three cases, UKRI took no action.

‘Drown out the negative messages’

In response to the same FOI request, UKRI also released minutes from a Researchfish Steering Board meeting that took place on 22 March 2018 and that included representatives from the Research Councils UK, the Engineering and Physical Sciences Research Council, and the Medical Research Council. This board is convened by Researchfish and is external to UKRI.

In the minutes, it is noted that there had been a “small number of offensive/abusive tweets during the large submission period”.

“It was agreed that abusive/threatening/offensive behaviour should not be tolerated,” the minutes said. “It was agreed that there was a need for the funder community to consider how it responds to the negative/offensive tweets that appear on Twitter during the submission periods. It was noted that funders are often constrained by corporate communications policy that can affect their ability to counter/engage.”

It added: “If funders find themselves unable to respond due to internal policies, one alternative could be to add positive messages to Twitter in order to drown out the negative messages.”

To tackle this issue, it was agreed that a comms sub-group would “explore ways to respond with consistent messaging in this area and also to get positive messages out during submission periods”.

Meanwhile, minutes of a February 2021 meeting of UKRI’s Research Outcomes Management Board, which lists representatives from seven individual councils in addition to UKRI ones, reveals that someone “voiced concern” about an “offensive tweet” that was still up.

The minutes show that someone whose name is redacted offered to “escalate it” and that the board “was in agreement that [redacted] should be asked to escalate the matter”.

‘Not even a real fish’

James Loxley, a professor of early modern literature at the University of Edinburgh, is one of the academics who was reported to Researchfish by UKRI after writing: “Fuck Researchfish. It’s not even a real fish.”

Loxley said that according to UKRI’s response to a subject access request he made, Researchfish’s parent company, Interfolio, contacted the funder complaining that the tweet was “offensive, unnecessary and causes our support team considerable distress”. They then urged the funder to persuade Loxley to take down the tweet, according to documents released to Loxley since.

Loxley told Research Professional News that he found it “astonishing” that UKRI staff were “putting pressure on employers to force staff to remove tweets uncomplimentary to Researchfish”.

He added: “The whole saga indicates a shocking failure of judgement among some elements at senior levels in UKRI.”

Research Professional News has approached Researchfish, and its parent company Interfolio, for comment.