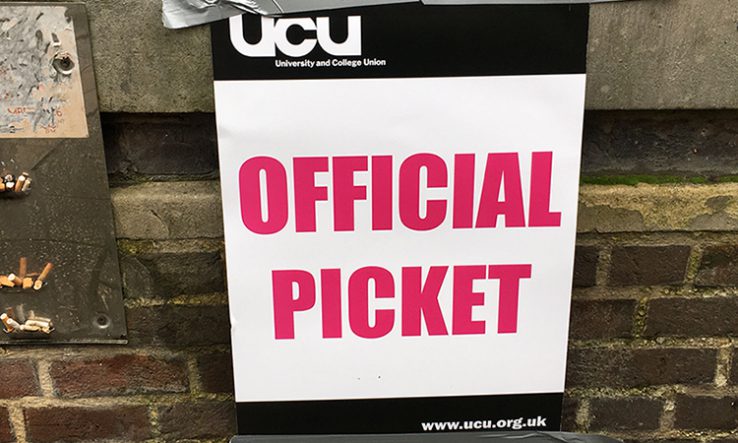 Universities will be hit with three days of strikes next month, after the University and College Union confirmed that walkouts will take place at 58 institutions from Wednesday 1 December to Friday 3 December.

Fifty-four universities reached the legal threshold of union member participation for strike action over pay and working conditions in results announced earlier this month, while 37 of the institutions balloted over proposed cuts to USS pensions secured a mandate.

The overall turnout on the pension ballot was 53 per cent; on pay and conditions it was 51 per cent. The UCU plans to re-ballot institutions that fell just short of the legal requirement to mandate action, which is 50 per cent, and has warned of further strike action next year.

Jo Grady, general secretary of the UCU, said the union had “set out pragmatic solutions that could halt widespread disruption to UK campuses”, but that “university bosses refuse to revoke unnecessary, swingeing pensions cuts, or even to negotiate on issues like casualisation and the unbearably high workloads that blight higher education.

“A resolution to this dispute is simple,” she said. “But if employers remain intent on slashing pensions and exploiting staff who have kept this sector afloat during a pandemic, then campuses will face strike action before Christmas, which will escalate into spring with re-ballots and further industrial action.”

Employers are represented by Universities UK in the dispute over pensions, and by the Universities and Colleges Employers Association in the row over pay and conditions.

Raj Jethwa, Ucea chief executive, said the UCU plans were “disappointing”, adding that UCU members “need to understand that any industrial action aimed at harming students is an unrealistic attempt to try to force all 146 employers to reopen the concluded 2021-22 national pay round”.

“We note UCU’s campaign focuses on casual contracts and workload,” he added. “We have made repeated offers of joint work in these areas for two years but UCU has rejected them. Ucea genuinely wishes to engage on these matters as far as we can at a national level, noting that they are ultimately for local negotiations.”

A UUK spokesperson, speaking on behalf of USS employers—effectively the arm of UUK that is representing employers—said universities would  “put in place measures to minimise the impact on students, other staff and the wider university community and will ensure that students can continue to learn and receive support”.

“We regret that the UCU is proceeding with plans for industrial action despite the fact that fewer than 10 per cent of eligible pension scheme members voted yes to strike action,” the spokesperson said. “Strike action will not address the urgent need for reform to keep the scheme affordable.”

Meanwhile, the National Union of Students national president Larissa Kennedy said her union was “standing shoulder to shoulder” with the UCU over the proposed walkouts.

“The onus for minimising disruption for students lies with university bosses: they must come back to the table to address the clear issues in how higher education is currently run,” she added.

The 33 institutions with strikes over both pay and pensions:

The 21 institutions with strikes over pay only:

The four institutions with strikes over pensions only:

Six institutions will see action short of strike over pay: