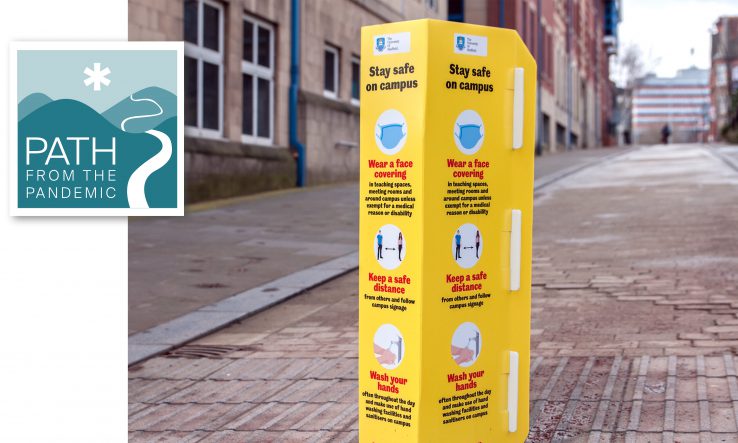 A year after the first lockdown, change must come in the pandemic’s wake

On 23 March 2020, prime minister Boris Johnson told the British people they “must stay at home”. It was an unprecedented move by a government initially reluctant to act on curbing the fast-spreading new coronavirus.

A year on, R&D and higher education organisations are still struggling with lockdown restrictions, laboratory closures and funding problems, as well as the tragic deaths of many staff and students.

Beyond these direct pressures and losses, calls for long-term change are growing as Covid-19 highlights underlying unfairness and inadequacies of existing systems.

Over the coming weeks and months, Research Professional News will be focusing on six critical areas where momentum is building for long term change in the wake of the pandemic, promoting discussion and debate. Through our Path From The Pandemic initiative, we hope to help the sector explore how to recover and rebuild in a way that is both sustainable and fair.

The coronavirus crisis has threatened to create a big hole in university research budgets, due in large part due to lockdowns driving down the numbers of international students whose fees cross-subsidise research, leading to mounting concerns about the sustainability of the university research. Costs have also surged as universities struggle to make their buildings safe and adapt to homeworking.

As a result, says Graeme Reid, chair of science and research policy at University College London, it is more important than ever for the government to increase its support, including by covering a higher proportion of the full economic cost of research.

“The balance between research grants and performance-driven, quality-related funding has tipped too far. QR funding needs to increase,” Reid tells Research Fortnight. “Without adequate QR, universities find it more difficult to seize fast-moving opportunities for business collaboration. Nor can universities provide as much support as they want to for early career researchers who are not yet ready to win grants for themselves.”

Meanwhile, questions are building up about the government’s ability to meet its target to increase overall R&D funding to 2.4 per cent of GDP in light of the cuts to overseas development funding, and the drop in charity and business spending on research over the past year. Going forward, the sector will need more assurance that both public and private funding is rising and being spent where needed the most.

The impacts of the pandemic have amplified some of the more toxic aspects of academia, such as overwork, bullying, racism and sexism.

“Universities have in many places pushed for a ‘business as usual’ approach in conditions that couldn’t be less than usual,” says Petra Boynton, a social psychologist and research consultant. This, she says, has “especially disadvantaged” some groups including postgraduate researchers, parents and carers, staff in precarious or sub-contracted roles, those with disabilities or chronic illnesses, and international students.

Culture problems have flourished, she says, “while staff and students are pitted against one another, meaning that anxiety, mistrust and distress increases”.

“This crisis needs addressing as a matter of urgency,” says Boynton, adding that funding bodies and universities should prioritise the mental and physical health of staff and students “as a means of repairing the damage they have caused”.

Science minister Amanda Solloway has made several commitments to reforming research culture as well as saying that institutions with widespread bullying and harassment problems should not benefit from public funding. More details are expected later this year in Solloway’s R&D People and Culture Strategy, as many organisations in the sector continue to promise reforming their own research culture.

One area the pandemic might have changed forever is the demand for education-related travel. Despite a swathe of initial cancellations last spring, online conferences have proved that academics do not necessarily need to be in the room to network and share expertise.

Covid-19 may have offered a way out of the “difficult decisions” the Russell Group warned of in 2019, when it worried that international business models, global research collaboration and international student recruitment have an “inevitable impact on the environment”.

In fact, international students have proved willing to learn online during the pandemic. Despite dire warnings about a steep decline in international student recruitment, according to the admissions service Ucas those numbers actually rose 7 per cent for the 2020-21 academic year to 42,930.

Most students will eventually return to campuses, but the Office for Students is already looking ahead to a more balanced offer of in-person and online education in future. Outgoing OfS chair Michael Barber’s report on digital education concluded that Covid-19 had “changed the situation for ever”, but he warned that disadvantaged students must not be left behind in the push for online education.

In its 16 March Integrated Review of foreign and development policy, the government put science and technology “at the heart of our alliances and partnerships worldwide” including promises of a new technology envoy to the United States, association to the EU’s Horizon Europe programme for R&D and the use of international aid funds for R&D partnerships with developing countries.

But recent events raise questions about how these ambitions will be achieved, not least the drastic cuts to aid-funded research, with a combined fall of at least £400 million across the Global Challenges Research Fund and the Newton Fund in 2021-22 compared to the previous year. A Royal Society spokesperson said the cuts “will damage the UK’s reputation as a reliable scientific partner”.

With the pandemic putting public finances under pressure, concerns have also been raised about where the money for the UK’s association to Horizon Europe will come from, with many fearing that UK Research and Innovation (UKRI) may have to absorb the annual bill of nearly £2 billion within its existing allocations.

As libraries closed and researchers and students found themselves forced online as never before, it was perhaps inevitable that Covid-19 would shake up academic publishing.

Libraries have struggled to secure access to ebooks for students, prompting openness campaigners to call for more affordable prices. Similarly, vice-chancellors’ group Universities UK and higher education IT firm Jisc have demanded major academic publishers cut the cost of all subscription, due to the financial impact of the pandemic on universities.

The pandemic has also led to gains for the open-science movement. As lockdowns began, publishers acted by making Covid-19 content freely accessible without embargoes and there was a surge in sharing of data and papers related to the virus.

Open-research advocates are hopeful that the sector can carry lessons from this to other pressing issues, such as research on climate change, and eventually bring such openness to all areas of work.

But arguments about who should pay for the work that goes into academic publishing continue to simmer, not least around the open-access initiative Plan S, which has the backing of UKRI.

Martin Eve, professor of literature, technology and publishing at Birkbeck, University of London, warned in an opinion piece in Research Fortnight last year: “The pandemic has shown, more than ever, why we need open access to research. At the same time, it has ripped the heart out of the economic systems that could and should support such transitions. Whether open access will sink or swim will be determined by the coming economic tide.”

Researchers and their advice played a key role in navigating the pandemic, often dividing public and political opinion.

“The scientific community has stepped up to the plate and the public has been able to watch in real time as scientific understanding went from almost zero to where we are today,” says Fiona Fox, director of Science Media Centre in London.

“The public have also seen that there is no such thing as THE science and that science progresses through disagreement and contestation before we arrive at consensus. That process has been played out in the open to an unprecedented degree and I am confident that public trust in science will be strengthened.”

The pandemic doesn’t seem to have altered public trust in scientists so far, says Bob Ward, policy and communications director at the Grantham Research Institute on Climate Change at the London School of Economics and Political Science.

“For instance,” Ward says, “the results of the latest annual Ipsos Mori survey, carried out in October 2020, found that 82 per cent of the public trust scientists to tell the truth, virtually unchanged from its level over the past couple of years.”

But he highlights a worrying and persistent trend of groups trying to discredit mainstream science.

“What is noticeable is that a fringe minority who have tried to discredit scientists over climate change have also been hostile to those scientists who are perceived to have recommended the lockdown and other measures to limit the spread of the virus,” says Ward. “This minority includes individuals with strong libertarian views who reject scientific findings that might lead to policies regarded as infringing on their personal freedoms.”

The length and severity of the pandemic also posed challenges to the government’s Scientific Advisory Group for Emergencies, which at times struggled with capacity and said it needed to become more robust in the future.

The Path From The Pandemic

Boris Johnson continues to insist that the country’s path out of lockdown will be “cautious and irreversible”. The challenge for the research sector now is to make the gains won during the pandemic irreversible, while cautiously moving towards a brighter, fairer future for everyone.

Follow our Path From The Pandemic coverage on www.researchprofessional.com and in Research Fortnight. Have your say on Twitter #pathfromthepandemic