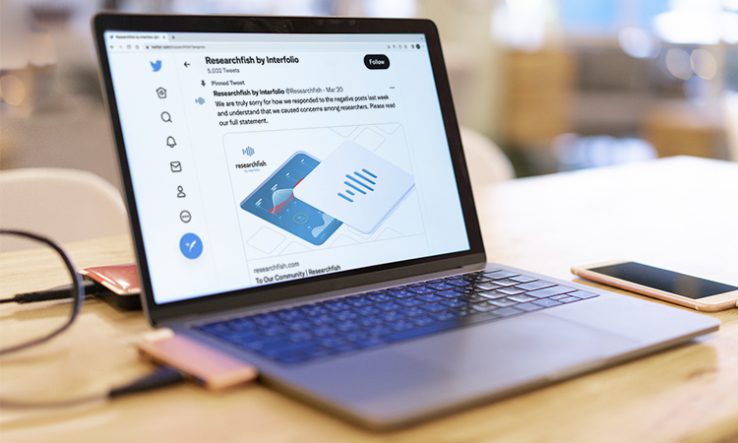 Researchfish, which has been embroiled in controversy over its handling of Twitter criticism, has maintained radio silence on the social media platform since the row erupted in March.

The impact-tracking service was accused of bullying, intimidation and a possible breach of data-protection laws after it reported a handful of researchers to their funder, UK Research and Innovation (UKRI), for their critical posts about the service.

Responding to a handful of individual comments, Researchfish’s Twitter account posted messages saying: “We understand that you’re not keen on reporting on your funding through Researchfish but this seems quite harsh and inappropriate. We have shared our concerns with your funder.”

It later emerged that UKRI had agreed with Researchfish that the service’s staff should flag “abusive, threatening or offensive tweets” to the funder.

Email correspondence between Researchfish and UKRI published in response to a freedom of information request revealed that Researchfish flagged a number of tweets made by academics to the funder, with UKRI agreeing that its tweets in response “set the correct tone”.

The latest tweet, posted on 20 March, was an apology from the service—accompanied by a link to a full statement—and read: “We are truly sorry for how we responded to the negative posts last week and understand that we caused concerns among researchers.”

A spokesperson for Researchfish, which is now owned by Elsevier, told Research Professional News: “Researchfish has publicly and wholeheartedly apologised for the concerns it recently caused the research community.

“We continue to work with our customers to understand their concerns better so we can bring improvements to processes and user experience as needed. We will make sure our customers are comfortable with any developments and kept informed.”

Further concerns raised over Researchfish’s use of data

Calls mount for UKRI to ‘cut ties’ with Researchfish

UKRI had told Researchfish its tweets ‘set the correct tone’