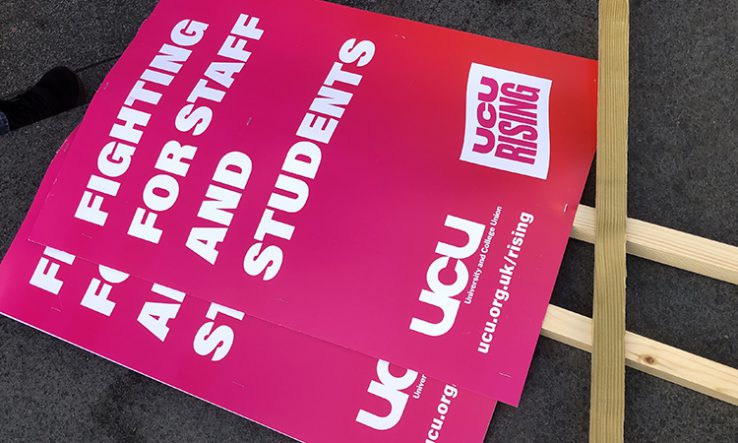 The University and College Union has confirmed the dates for all 18 days of strike action that will hit 150 UK universities in February and March.

Staff have already taken three days of strike action this academic year, with the union demanding “a meaningful pay rise to deal with the cost of living crisis, as well as action to end the use of insecure contracts” and a reversal of cuts to Universities Superannuation Scheme pension benefits.

The union announced 1 February as a strike date last week. On 24 January, following a meeting of its Higher Education Committee, the UCU confirmed the dates for the remaining 17 days of action promised before the end of March. The dates are:

There will be no action in the week commencing 6 March, the union said.

“There is a clear route out of these disputes, but at present vice-chancellors lack the political will to take it,” said UCU general secretary Jo Grady. “A resolution can be reached, but that is in the gift of university vice-chancellors who need to urgently reassess their priorities and deliver a deal that benefits staff and students.”

A meeting between UCU and the University and Colleges Employers Association—which is representing employers in discussions on pay and conditions—is due to take place tomorrow.

Ucea has stated that its initial offer for 2023-24 (​​which involves uplifts of between 4 per cent for higher-paid and 7 per cent for lower-paid staff) remains its current position, but the UCU has described the offer as “not enough”.

Ucea chief executive Raj Jethwa said: “We hope that our proposals will be recognised as a genuine attempt by employers to address cost of living pressures. Now UCU, its fellow trade unions and employers need to work together in negotiating rather than simply preparing for strikes.”

Meanwhile, a spokesperson for USS Employers—the branch of Universities UK representing employers in discussions on Universities Superannuation Scheme pension changes—said the group was “disappointed to see these new plans for strike action from the UCU”.

“Industrial action already faced in recent years means universities are well prepared to manage pockets of disruption and will work hard to put in place a series of measures to ensure students do not miss out on the opportunity to learn,” the spokesperson added.

“At the same time, we will continue to work towards an agreement, as far as it is possible to do so, in the interests of all our staff.”

From February, the UCU has said it will begin reballoting its members to allow action to continue through the rest of the academic year if required.