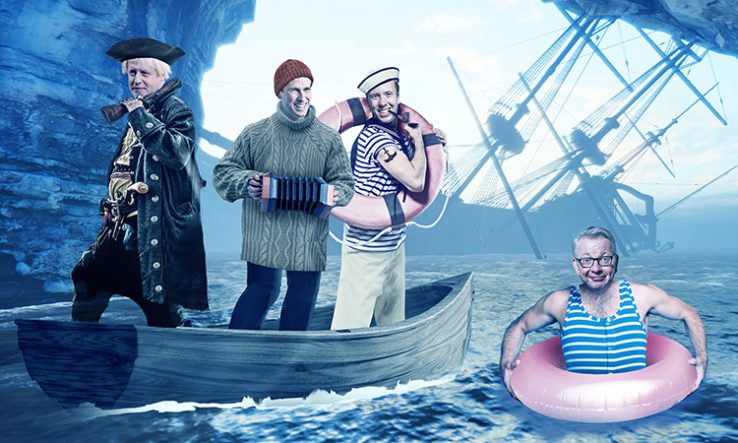 McCall: I’ve had enough of this.

Janet: Mr McCall could you switch your camera on?

McCall: No, I’ve had enough. I never thought I’d say it but I miss the office.

Janet: Sometimes you were as flexible as a newt by lunchtime.

McCall: Just oiling the wheels of commerce, Janet. I haven’t left the house for 72 hours.

Janet: Can you put your camera on?

McCall: No, I miss Alexander swanning into the office with a soya latte in one hand and a vice-chancellor with bad headlines in the other.

Janet: Have you told him that?

McCall: Of course not.

McCall: No, I’m in my pants and dressing gown, and my cleaner hasn’t been for three weeks. I’ve got no ironed clothes and my kitchen looks like a Wuhan wet market.

Janet: Mr Juniper said he would be bringing a new client on the call.

Janet: Just about now. Here he is, I’ll admit him and this other person, GW-Defence, who’s that?

Juniper: Good morning, Janet, how are you on this fine crisp morning.

Juniper: Not to worry. I’m sure you’re learning lots as part of your degree apprenticeship.

Juniper: Ah, office banter, even in lockdown, how lovely. Allow me to introduce our new client, the secretary of state for education Gavin Williamson.

Williamson: Gavin will do. May I say ‘ow luvlee it is to meet a yoongster such as yourself.

Juniper: Never mind, where is Oliver? Why isn’t his camera on?

McCall: Here I am, just on the phone to a client. Good to see you secretary of state.

Juniper: What are you wearing?

McCall: A woollen jumper, it is winter.

McCall: Yes, I suppose they are. You know, just trying to keep fit while locked down.

Williamson: This line is seecoor isn’t it?

McCall: We take every precaution secretary of state. There’s no Russian malware on our computers.

Juniper: Perhaps, Gavin might explain how we can help him.

Gavin: Is it alright to speak in froont of the yoongster?

McCall: Do you read Jung, Janet?

Janet: I don’t know what you are talking about Mr McCall.

Juniper: Janet is a great success secretary of state, she is a pioneer in vocational learning. Whatever you say in front of us you can say to Janet.

Gavin: Good because I wouldn’t want anything to slip out on social media.

McCall: No, we wouldn’t want any bad headlines would we secretary of state.

Williamson: That’s the thing. I’m sick of it all and need help.

McCall: Me too, I was just saying to Janet before you came on, this latest lockdown is the worst. I blame the government.

Williamson: No, I mean the negative press I receive. You peepoll are meant to be the media experts.

Juniper: Indeed we are minister. We’ve helped hundreds of clients in much worse situations than you.

McCall: I wouldn’t go that far.

Williamson: Have you seen the froont of the Star today?

Juniper: I think he means the Daily Star, not the Morning Star.

Williamson: There’s a giant picture of me and they are givin’ awaay a “Sorry for being clueless” kit for every politician. I’m not clueless, am I?

Juniper: Well, some might say, you appear to be clue-light.

Williamson: I was supposed to launch my FE reforms yesterday, instead I ended oop tellin’ everyone that I would give two weeks notice on schools re-opening.

Juniper: Yes, when are schools re-opening? It’s rather tricky to run a university media relations agency and teach GCSE Spanish at the same time.

Williamson: That’s the problem, I haven’t a clue.

Juniper: Yes, yesterday was the least successful launch since…

Juniper: I was thinking of the Challenger space shuttle.

McCall: OK, secretary of state, take a deep breath. There are plenty of things we can do at this moment in time. Let’s run through our standard operating procedure.

Juniper: We consult focus groups in key demographics. Who would you say dislikes you the most secretary of state?

Williamson: MPs, no parents, no teachers, no the unions, no yoongsters.

McCall: What is it with those Jung guys?

Juniper: Excellent, so let’s consult our resident youth trends analyst. Janet, what can the minister do to make young people happy?

Janet: Well, I’ve been thinking about this for an assignment on my course, reputational management among key stakeholders through search engine optimisation.

McCall: You mean, the minister should get with the latest internet craze?

Janet: Sea shanties are very big on TikTok at the moment.

Juniper: Yes, it’s what the yoongsters are into. Do you have anything in mind Janet?

Janet: There’s something that’s been doing the rounds with people on my course. I think the minister could own it. Send himself up.

Juniper: When Gareth Southgate missed a penalty and England lost the Euro 96 semi-final he did a self-deprecating add for Pizza Hut, and over a period of time…

McCall: A long period of time.

Juniper: He sufficiently repaired his reputation to become England manager.

McCall: And then lost another semi-final.

Williamson: I could make a joke of myself?

Juniper: No comment, minister. This is more active reputation management, a form of diversion if you will.

Janet: It’s a version of The Wellerman, which is very popular at the moment. It’s a four-piece harmony, which you could do with, say, the prime minister, Michael Gove and Matt Hancock. But for now, if I share the lyrics on screen, we could give it a try.

Janet: There once was a ship that put to sea.
The name of the ship was the DfE.
The winds blew up, her bow dipped down.
O blow, my Tory boys, blow.

Janet: She had not been two months from shore
When down on her a ‘demic bore
The minister called all hands and swore
He’d take exams in tow

Janet: Before results had hit the water
The algorithm blew up on Spencer
He looked for blame and sacked Slater
But Frank he did not go

Janet: Then free meals, none came foreward
Minister shamed by Marcus Rashford
But he belonged to Boris’s board
So Frank he did not go

Janet: For just one day, or even less
The schools went back, Lord what a mess,
Soon they closed, ‘twas for the best
But still Frank did not go

Janet: As far as I’ve heard, the Gav’s still there
He’s not been sacked, it’s hardly fair
The Williamson makes his regular call
That unis stay open, virus and all.

Soon may the Williamson turn
To close ours schools and stop us learn
One day, when the Covid’s done
He’ll take his leave and go.

Juniper: Inspiring, Janet, thank you. What do you think secretary of state…Mr Williamson, are you there?

Janet: That’s one way of putting it.

Juniper: Ah well, he’ll come back. They always do. Now, tell me Oliver, why are you wearing cricket whites?

Terms of use: this is a free email for fun on a Friday. It should be shared widely like a sea shanty video on TikTok. Want to send us your recording of “The Williamson”? Want to say hello? Email: ivorytower@researchresearch.com