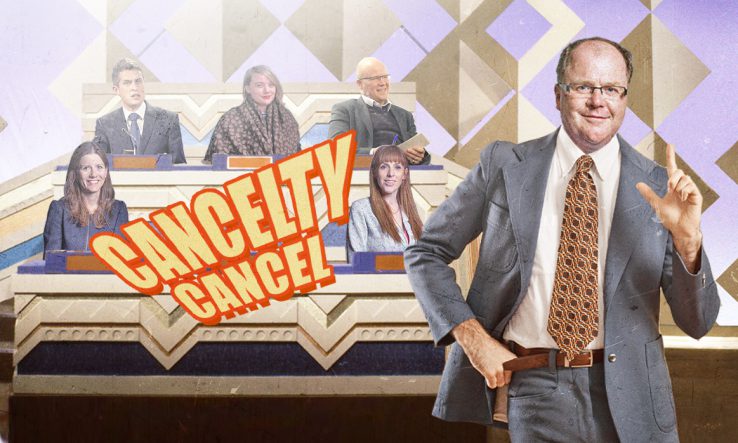 Freeman: Hello and welcome to a new series of Blankety Blank or as it’s now known in government circles Cancelty Cancel, which is ironic since the show has been cancelled more times than the cast of Top Gear.

I’m your host, science minister George Freeman, or as they call me in the department for Business, Energy and Industrial strategy, that bloke whose dad won the grand national. I am the captain of the innovation nation, a bit like the Harry Kane of science, except with all this levelling-up I’m not hoping to be transferred to Manchester.

But I could talk about me all night, let’s meet our celebrities, and I mean that word in its loosest possible sense. First of all, a lovely lady from the department for education who knows something about making cheap television because she used to work for Worldwide Wrestling Entertainment, its further and higher education minister Michelle Donelan.

Freeman: Listen to that reception, what do you say to that Michelle?

Freeman: Next, we have, strictly for reasons of balance, University and College Union general secretary Jo Grady.

Freeman: Have you ever cancelled anyone Jo?

Grady: I didn’t even cancel the milk last time I went on holiday.

Freeman: And next to Jo tonight, we have a man who is no stranger to cancel culture, director of the Free Speech Union, Toby Young.

Young: Can I just ask who thought it was a good idea to sit me next to UCU?

Grady: At least we are an actual union.

Freeman: Moving on, also joining us for the first time since leaving the cabinet, it’s former education secretary Gavin Williamson.

Freeman: So glad you managed to find the studio tonight, Gavin, how are you?

Williamson: Thanks for inviting me, I’ve got a lot of spare time on my hands just now.

Freeman: Where is he? Are we going to have to shoot this again? He’s what? He’s cancelled? That’s ironic. Got a better offer to do Richard Osmond’s House of Games? We’ll just have to empty chair him, literally. Right, next to where Alistair Jarvis should have been, is science fan boy and former senior adviser to the prime minister, Dominic Cummings.

Mix of half-hearted applause and boos.

Freeman: Welcome to the show, Dom.

Cummings: You are all idiots.

Freeman: That’s our celebrities. Let’s meet the contestants. First, A Student from Kent. Hello, and what do you do?

Freeman: That’s nice, and our other contestant is A Vice-chancellor from the Midlands. Welcome, and what do you do?

Freeman: That’s also nice. Now, you both know the rules. I have here a sentence on my card with a word or words blanked out. You tell me what you think they should be, and we will try to match them to what our celebrity panel has written down.

First up, it’s A Student, so here goes. “Recently my old college put a plaque next to one of its statues. Now instead of calling him our kind benefactor, it says that Cecil Rhodes is a committed BLANK”.

Music plays while the celebrity panel writes their answers.

Freeman: Remember, the clue is in the question. Time for an answer, I’ll read it again: “Recently my old college put a plaque next to one of its statues. Now instead of calling him our kind benefactor, it says that Cecil Rhodes is a committed BLANK or BLANKS”.

Freeman: Bit rude, I was just asking the question. Oh, I see that’s your answer. Right, for every celebrity who matches with that you score a point. First of all, Michelle Donelan, what do you have?

Donelan: I wasn’t sure about this one, so I’ve written, “Educationalist”.

Freeman: Never mind Michelle, you stick at it, don’t let anyone tell you that you don’t know what you are doing. You are bound to get something right sooner or later.

Donelan: I attend cabinet you know.

Freeman: Later then. Next, please what about you Jo?

Grady: I wrote “a committed exploiter of the working poor and expropriator of the wealth of indigenous people”.

Freeman: It’s blankety blank not a dissertation. Toby, what do you have?

Freeman: Do you know anything about Cecil Rhodes? Never mind, what about you Gavin?

Freeman: What did you write?

Williamson: Sorry, I ran out of time, I couldn’t think of anything fast enough.

Freeman: Give me strength. Skipping over Alistair Jarvis, what about you Dom?

Cummings: “A committed enemy of woke”.

Freeman: I’ve signed a contract for a whole series of this. Right, no points there I’m afraid. Let’s move on to our next contestant. I’ll read the card. “The other day, a new professor who I disagree with moved into my office, I don’t like to see academics summarily dismissed but BLANK or BLANKS”.

Music plays while the celebrity panel writes their answers.

Freeman: Let’s see what you think vice-chancellor. “The other day, a new professor who I disagree with moved into my office, I don’t like to see academics summarily dismissed but BLANK or BLANKS”.

Freeman: You do need to give me an answer.

Vice-chancellor: That is my answer.

Freeman: You did do the AdvanceHE senior management training programme, right? OK, let’s go with “whatever”. Michelle, as a government minister what was your response to this?

Freeman: Jo, as a trade union representative what did you say?

Freeman: Toby, as a champion of free speech, what have you got?

Young: First of all, I thought the professor might agree with me about things so I wrote, “We can offer them free legal advice” but then I thought maybe the professor was a commie so I also wrote [turning his card round] “Whatever”.

Freeman: Gavin, tell me you thought of something this time.

Williamson: I didn’t write that. I was just thinking out loud.

Freeman: Finally, Dom, having done more than anyone else to give us Boris Johnson and Brexit, what have you got to say to the nation?

Cummings: My answer to the question can be read in a 5,000-word Substack article I’ll be releasing tomorrow to subscribers, only £10 per month, on why negative feedback loops in the administrative flux capacitor result in reproduction of the status quo.

Freeman: Whatever. That means we say goodbye to A Student, who was right all along, but no one could be bothered to listen to them. But you do not go away emptyhanded, you’ll be taking home this remaindered copy of the UK R&D Roadmap. We had lots printed in Beis, don’t think we’ll be needing them now, just cluttering up my office. So, please A Vice-chancellor come and join me for the super match game.

Applause, music plays and the board revolves.

Freeman: You know how this works. In a moment we will reveal the legend, but first choose three of our celebrities to help you.

Vice-chancellor: As a university manager, on something this important I should probably consult with the unions, but I’m not going to. So, that’s Jo and Toby out.

Grady: He’s not actually a union.

Freeman: So, that leaves Michelle, Dom, and Gavin. Are you sure?

Freeman: Gavin? Really? OK then. We have a recently cancelled phrase with a word blanked out. The celebrities will give us their answers and you can choose one of them or one of your own to win tonight’s star prize. Let’s see what we’ve got: “BLANK sugar”. Tricky one but the clue is the cancel, “BLANK sugar”. Let’s roll the stone over to Michelle and see if we can jag her into action. BLANK sugar, Michelle?

Freeman: Seriously? Those FE colleges are lucky to have you. Next, Gavin, “BLANK sugar”.

Freeman: No, that was the last round. Never mind, Dom what do you have?

Cummings: A horde of documents, texts and WhatsApp messages which prove Hancock should be sacked.

Freeman: He has been sacked, let it go. Do you have an answer to the question?

Cummings: “A spoonful of…”

Freeman: Not a hit for the Rolling Stones but at least it’s a song. Time to choose and I can’t give you any more clues. Do you want to go for Michelle’s “icing sugar”—which unbelievably doesn’t sound so bad in retrospect—Dom’s “a spoonful of” or Gavin playing a different game entirely.

Freeman: You are kidding me!

Freeman: Alan Sugar? Not a bad answer. He hasn’t been cancelled though, he’s got his own TV show.

Vice-chancellor: There was all that business of him tweeting pictures of African footballers.

Freeman: Quite right, I’d forgotten that. These days everyone will be cancelled for 15 minutes. Right, let’s look at the answers from our studio audience. For 50 points, they said…

Freeman: “Icing sugar”, well don’t let anyone say that Michelle Donelan isn’t in touch with at least ten per cent of the room. What was the next answer, for 100 points?

Freeman: “Alan Sugar”, there you go, it wasn’t such a crazy answer after all. You’ll have won a good prize with that. But let’s see what the top answer was, for 150 points.

Freeman: “A spoonful of sugar”, seriously? Do none of you read the newspapers? Anyway, it looks like once again Dominic Cummings had a deep insight into how people think.

Cummings: I scraped the data off their phones when they were voting.

Freeman: Let’s reveal tonight’s prize for 100 points. It is the height of British innovation and the first product brought to market via the Advanced Research and Invention Agency, this teas maid and alarm set so that every morning you can feel wide a woke. How does that sound?

Freeman: That’s all for this evening, join us next week when six more celebrities will be trying to talk over each other while wondering about switching agents. Bye.

Everyone waves as the theme music plays.

Terms of use: this is a free email for fun on a Friday, it should be shared with friends like a holiday villa in Marbella. Want to apply to appear as a contestant on Cancelty Cancel? Want to say hello? Email ivorytower@researchresearch.com