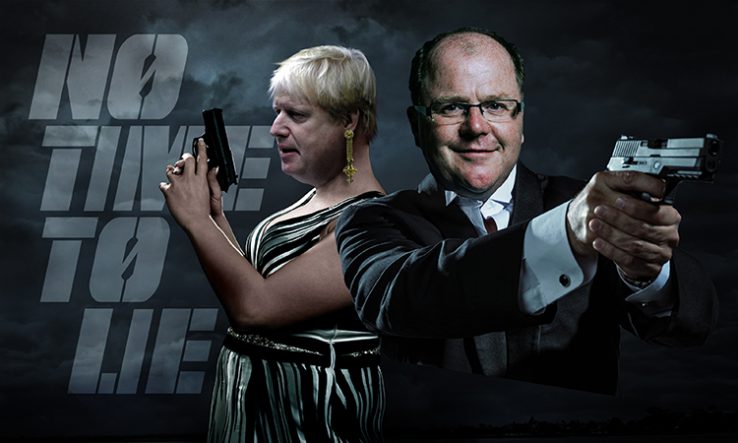 Ivory Tower: the James Bond franchise is rebooted with a new star

1. Int. The Department for Business, Energy and Industrial Strategy, London. Science minister George Freeman enters a vestibule office where a woman is sat behind a desk.

Woman: I know, you say that every time.

Freeman: Ah Miss Moneytree what would her majesty’s government do without you?

Woman: Probably hire someone younger and cheaper to do my job. You can go straight in, he’s expecting you.

2. Int. A wood panelled office, a man sits behind a large mahogany desk.

Freeman: You asked to see me K?

Freeman: You want me to fly to the Caribbean and take care of our latest space programme?

Freeman: You want me to head out to Monaco to knock some heads together about defence co-operation?

Freeman: It’s not Northern Ireland is it? Operation Horizon Protocol?

Freeman: Thank goodness, bit worried there for a minute.

K: We’ve had a troubling communication, picking up a lot of chatter.

Freeman: If there is an imminent threat you can always count on me to protect the innovation nation.

K: This isn’t something we’ve faced before. It could be the end for all of us.

Freeman: Who is it? The Russians?

K: The Treasury, they say we aren’t going to get all the uplift in the science budget.

Freeman: I can’t quite believe it sir.

K: Yes, Freeman. In our jobs we are used to a vicious web of deceit and betrayal, but this is something altogether different. I want you to get to the bottom of it. Get over there and find out who is behind all this. You’ve only got five days.

Freeman: Before the end of…?

K: Before the Comprehensive Spending Review is published. Look, this is the only clue we’ve got, it came with a letter from the Treasury outlining the process around departmental submissions to the CSR.

Freeman: It looks like a ticket for a casino, or maybe a hair stylists. What’s this writing? What is “Sunak”?

K: Our cryptography people think it may be some kind of personal branding, be careful 002.4. See Q on the way out, he’ll provide you with everything you need.

3. The basement of BEIS, people in white coats are testing a variety of devices.

Q: They have and please stop calling me that.

Q: I used to run this place you know.

Freeman: I do know that.

Q: Until she came along.

Freeman: It was a long time ago Q, you need to let it go.

Q: It was January. Carrie says to Boris, this climate change summit is kind of a big deal, you really need someone to run it full time.

Freeman: She obviously meant herself.

Freeman: I’ll take a look at it later. K said you would kit me out for my mission.

Q: Of course, take this, it’s the latest technology.

Q: It’s something we got from the chaps in City Hall, it’s called an Oyster Card. You just tap in and out of public transport with it and it calculates your lowest possible fare.

Freeman: Public transport? What about the Aston Martin?

Q: To take a trip to the Treasury? Have you done the online training on back to the office and sustainable working?

Freeman: To be honest, I’ve been having problems logging into my work email recently.

Freeman: Does it fire rockets and have an ejector seat?

Q: No, but it folds down so you can carry it on the tube.

Freeman: You don’t even have one of those e-scooters?

4. Ext. The Treasury, Whitehall. 002.4 arrives on an e-scooter wearing a union jack crash helmet. He looks around for a place to park the scooter and then props it against the wall.

Policeman: Oi, are you just leaving that there, sir?

Freeman: I’m on a mission.

Policeman: That’s what they all say sir. You can’t leave it there, it’s cluttering the highway.

Freeman: I can’t go into the villain’s lair carrying a scooter.

Policeman: It’s either that or a fixed penalty notice sir.

Freeman: Fine, give it here. Should have taken the bloody bike.

Policeman: Mind how you go sir.

Receptionist: Sorry, you can’t bring that in here.

Freeman: Look, I’m on a mission for the innovation nation. I don’t have time for this.

Receptionist: Well, you’re not leaving it here. I’ve got all these folding bikes already.

Freeman: Fine, I’ll take it with me.

Receptionist: Who are you here to see anyway?

Freeman: Does the name Sunak mean anything to you?

Receptionist: He’s probably a bit busy, do you have an appointment?

Receptionist: Are you selling something?

Freeman: No, I’m here on a mission.

Receptionist: They all say that love. What’s your name?

Receptionist: Freeman George Freeman, that’s a bit of a mouthful. Anyway, sign here and wear this lanyard at all times. He’s on the third floor, and don’t forget to take that thing with you.

6. Int. The third floor. 002.4 arrives carrying his scooter and still wearing his Union Jack helmet. As he approaches, the doors open ahead of him, and he finds himself in a long office with a small man behind an enormous desk, stroking a cat. We see a sign on the desk that says ‘Rishi Sunak, Chancellor of the Exchequer’.

Freeman: So, you are Sunak? I thought it was a sinister organisation.

Sunak: That’s no way to speak about the Treasury Mr Freeman. We’ve been expecting you, Alok Sharma rang ahead and said you were coming over.

Freeman: So, Q is one of yours?

Sunak: My dear Mr Freeman, in the run up to a Comprehensive Spending Review everyone is one of ours.

Freeman: You’ll never get away with this Sunak.

Sunak: Oh, I think I will. No one will notice that we have shifted the full implementation of budgetary investment to the end of the five-year fiscal period.

Sunak: You see Mr Freeman, my plot is so fiendish, it is beyond the understanding of a mere agent of Beis such as yourself.

Freeman: My job is to defend the innovation nation.

Sunak: Careful Mr Freeman, when I am prime minister your job will be junior minister in the Northern Ireland office.

Freeman: I see, well putting it like that, how are we going to spin breaking the government’s manifesto commitment on the science budget?

Sunak: Tell people we are committed to making Britain a science superpower.

Sunak: There’s no time to lie on budget day. Everyone will be too busy looking for national insurance rises and universal credit cuts. Just tell them it’s all part of our long-term plan.

Freeman: For the economy?

Sunak: To make me PM. Was there anything else, Mr Freeman?

Sunak: Goodbye Mr Freeman…but leave that scooter and helmet, it will make a good photo opportunity with the red box.

7. Int. Freeman leaves the office, handing his scooter and helmet to one of Sunak’s people. On the way out he spots an attractive blonde

Blonde: Gosh, crumbs, wiff waff, anno domini and all that, awfully flattered old chap, but I’m on my way to a tete-a-tete with the boss, Rishi, got a few bills I need him to pay. Bit of a cock-up on the redecoration front, still finding invoices for wallpaper and things. How was he by the way?

George Freeman will return in Quantum of Science.

Terms of use: this is a free email for fun on a Friday, it should be shared among friends like the convivial, fraternal spirit of the leader of the house of commons. Want to order a 002.4 action figure? Want to say hello? Email ivorytower@researchresearch.com