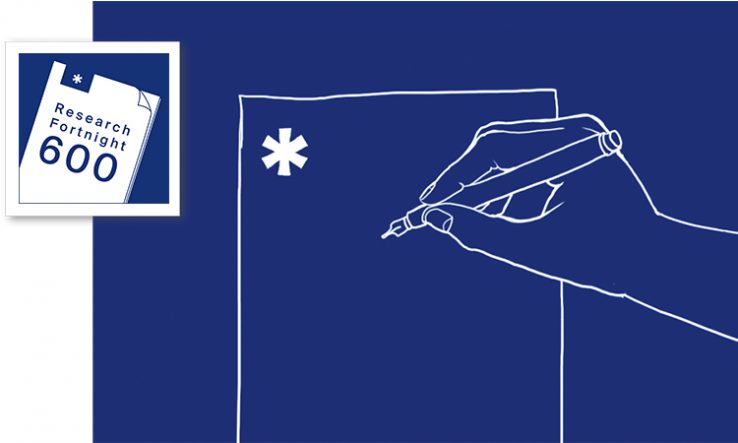 As we mark our 600th edition, let’s look to the sector’s future

Reflection on the past to shape the future is a constant backdrop to research. It is also particularly relevant for this issue of Research Fortnight—the 600th since our launch in 1994.

When our 500th edition was published in May 2017, the dominant topic was Brexit. Today, the implications for research of the UK’s vote to leave the European Union are still very much playing out. Participation in the EU’s €95.5 billion R&D programme still hangs in the balance; but ministers this week announced they would guarantee funding for those who win grants while the EU and UK are at loggerheads, even if the UK fails to join the programme.

Meanwhile, news that no scientist has obtained a visa under the route for prizewinners introduced as part of the government’s global talent programme will fuel existing concerns over the UK’s ability to attract top researchers.

But there are still positives. The furore around Horizon has united the sector in its demands of government, and forced a focus on what researchers want from public research spending. Now, amid the huge added pressure of the pandemic, these byproducts of the last crisis are taking on even more significance.

In universities, Covid-19 has already spurred rapid change. With the UK government this week updating guidance to “strongly advise” face coverings are worn in communal areas on their premises, as a response to the heavily mutated Omicron variant, many will be reflecting on the online approaches to research and teaching used earlier in the pandemic; and, while hoping such measures aren’t compulsory, looking at where they can be a benefit.

The legacy of Brexit, and even more so, Covid, will have surely shaped the state of UK research when Research Fortnight reaches its 700th edition. In our centrepiece interview this week, Research England head David Sweeney calls for a research system that is “more supportive of individuals”. He highlights in particular the difficulties faced by early career researchers brought to the fore by Covid-19.

The argument for a more supportive system can also be applied to many others disadvantaged by existing academic structures and hierarchies: women, Black and minority ethnic academics, and those with caring responsibilities or from disadvantaged social backgrounds. The pandemic has exposed longstanding obstacles and renewed calls for reform.

Our 700th edition is due to be published in 2026, as the government’s target to spend 2.4 per cent of GDP on research should be entering the home straight. Top-down policies following Brexit and Covid will heavily influence whether that target is met—and, more crucially, given average OECD spend on research has already risen beyond that level—how well the UK’s research base is positioned for the future.

But research is, at heart, driven by the skill and dedication of its people. For the sector to be in the best place possible in five years’ time, all within it or connected to it have a part to play in dismantling systemic barriers still faced by too many researchers—in individual departments, institutions, and the sector as a whole.

The real lesson of our past 100 issues is that the research sector is strong and resilient. One of the things it does well is respond to adversity and make a better future out of it.