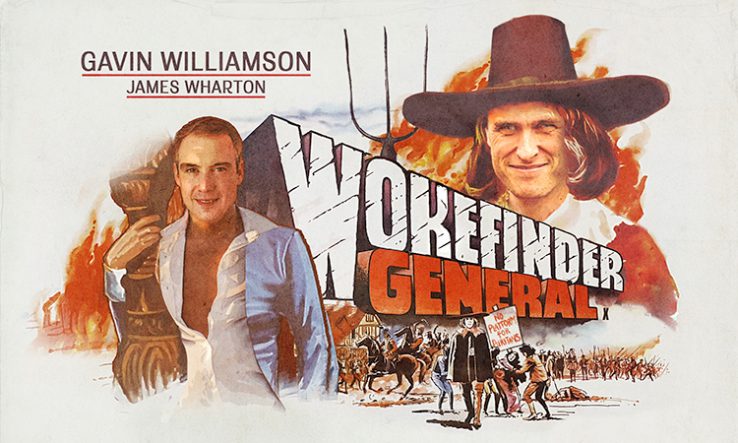 Ivory Tower: We discover a remake of the Vincent Price classic

Narrator: After years of bitter civil war, the nation remains divided. One man tours the country seeking out evidence of wrong thinking among the young, and to defend the right of Godfearing Englishmen to speak as freely as they wish. His task is to rid the land of all that could harm his government’s cause. He is Gavin Williamson, the Wokefinder General.

[Two men are riding on horses]

Williamson: What say you the name of this encampment be Wharton?

Wharton: It be the village of Oxbridgeshire, master Williamson.

Williamson: And reports of wokery there have been?

Wharton: They say a coven of wokes do practice their black arts there.

Williamson: And white arts I hope too, Wharton. No man should put pressure on a teacher to remove books that add stretch to a course.

Wharton: Aye master Williamson, there will be no decolonising of the curriculum on thy watch.

Williamson: Aye, and there be no critical race theory neither. Verily, I have been clear on that. All arts matter, not just black ones.

Wharton: I thought we were down on arts in general master Williamson.

Williamson: Aye, that too.

[The riders arrive and dismount. A crowd has gathered. Williamson and Wharton are approached by a woman]

Williamson: Mistress Dandridge I see that you are arrived before us.

Dandridge: Just doing the work of the Office master Williamson.

Williamson: I do hope that these people have not been warned of my arrival, so that they might hide evidence of wrongdoing.

Dandridge: Of course not master Williamson, but I can give you assurance that there be no wokery here. I have checked already.

Williamson: I will be the judge of that mistress Dandridge. I do hear that there be a culture of cancel in this village and that stout English yeomen be afeared to speak freely about their legitimate concerns for immigration and the like.

Dandridge: Pray master Williamson, where doth thou hear such rumours?

Wharton: He read it in Ye Olde Spectator, so it must be true.

Williamson: When spoken to Wharton.

Dandridge: These stories be but greatly exaggerated master Williamson, there be no wokery here.

Williamson: Wharton, bring me my judging stool and whip of truth. Goodie Dandridge, bring me one of the yoongsters.

Williamson: Aye, one of the yoong people kept in darkness by their woke-ish belief. That one there will do.

Wharton: Thy stool and whip are prepared master Williamson.

Williamson: Now child, what is your name?

Dandridge: It be Charlie, master Williamson.

Williamson: The child has a tongue in its head. Charlie be a boy’s name is it not?

Charlie: Actually, I don’t answer to that sort of hetero-patriachial categorisation.

Williamson: I see. Goodie Dandridge says that there be no wokery in this village, but I think that I can smell it like wood in a fireplace.

Wharton: And he knows about that sort of thing.

Williamson: Tell me child, what view have you of our Lord High Commander?

Charlie: That haystack in a suit?

Williamson: I fear there be wokecraft in this village. Take me to the school house.

Charlie: What’s the whip for?

Wharton: To whip the woke-ish into shape.

Dandridge: He used to be chief whip for the government. It is to remind us all that he knows the innermost thoughts and secrets of each of us, even the Lord High Commander.

Charlie: Bit kinky. What does a chief whip do?

Williamson: I will tell thee child. I did walk the corridors of parliament and seek out those who did speak against the government and I did stop them with threats of menace or by blocking their advancement.

Charlie: So, it was literally your job to stop people speaking their mind?

Charlie: And to threaten to cancel MPs if they spoke out.

Wharton: She has a point.

Williamson: Enough of this idle prattle, take me to the school house.

Williamson: Hast thou tidied up mistress Dandridge? I can but see the good book and classics of literature.

Dandridge: You will only find books by dead white men in here master Williamson.

Williamson: I can smell wokery. There must be a hidden library somewhere, full of the works of Foucault and Freud and other un-English utterings.

Dandridge: They be dead white men too, technically.

Wharton: Here master Williamson. This desk is replete with woke.

Williamson: Ah, what is this? Gender Trouble by Judith Butler? Queer Studies for Beginners? Race and Sexuality in Seventeenth-Century England? The Guardian Book of Cryptic Crosswords?

Wharton: There be wokecraft here!

Charlie: They weren’t here before, he’s planted them.

Williamson: The only planting that hath gone on is the planting of the wicked root of wokery. It must be burned out.

Charlie: Burned? Who spoke about burning? Blimey that escalated fast.

Williamson: Wharton take these books away and exchange them for the approved list.

Wharton: Boris’ biography of Churchill, How to Lose Friends and Alienate People by Toby Young, and Uncle Tom’s Cabin?

Williamson: Aye, and the rest.

Dandridge: Must I remind you master Williamson that this school house is autonomous.

Williamson: Had thou ensured that it had fulfilled its conditions of registration with your Office Goodie Dandridge, I would not have to take such steps. Bring the child to my stool of judgement.

Charlie: That Guardian crossword book isn’t mine, I swear.

Williamson: Roll up thy sleeves Child…As I suspected. What is this?

Wharton: The mark of the devil!

[Voice from the crowd]: That be cultural appropriation!

[Another voice]: Aye, cancel her!

Williamson: This be worse than I thought. There is a great infestation of wokery here.

[Voice from the crowd]: Just do one boomer!

Williamson: See how they try to stop me speaking Wharton, it is the very image of wokecraft.

Wharton: Will I erect the travelling platform master Williamson that thou may preach to the crowd without expectation of challenge or correction?

Dandridge: These be but simple young folk master Williamson, they mean no harm.

Williamson: Their minds be not sufficiently open to views other than their own. I shall speak at them.

[Voice from the crowd]: Get lost grandad. We’re on strike.

Williamson: I knew it. There is more going on here than the practice of wokery.

Charlie: We’ve all been locked up in this village because of the plague and we are on rent strike.

Williamson: It be Marxism pure and simple, Wharton. Ye pay no rent, child?

Wharton: What do they believe in?

Wharton: I thought we believed in sovereignty.

Wharton: Aren’t we supposed to…

Charlie: And free speech within the law.

Williamson: In levelling up everything stays exactly the same.

Williamson: Never mind, I’ll explain it to you on the ride back to London. First, I must render my judgement on this village.

Dandridge: Perhaps, some sort of review could be established.

Williamson: It is too late for that Goodie Dandridge, let me speak.

[Voice from the crowd]: Shut it gammon!

Williamson: See how they do seek to cancel me as I do the will of parliament.

Williamson: Yoong people of Oxbridgeshire, here is my judgement. I will burn…

Charlie: Enough with the burning already.

Williamson: A hole in your pocket by issuing a 10,000 groat fixed penalty notice for flagrant and unrepentant wokery.

[Another voice]: I was going to buy an avocado.

[Another voice]: I was going to get a frothy coffee.

[Voice from the crowd]: Round here? You’re having a laugh.

Williamson: Mistress Dandridge collect the fine and deliver it to the usual address. Wharton and I must away. The sky does bruise and there is more wokery to be found.

Wharton: And you’ve got to write that Telegraph column for tomorrow.

Dandridge: Any chance you might do something about this year’s exams, or the lost learning of students, or the employment prospects of graduates? Or plague testing in school houses?

Williamson: No time for any of that Goodie Dandridge, there is woke to be done.

Wharton: See what he did there?

[Groans and sighs all round. Williamson and Wharton ride off].

Narrator: In a land torn by civil war, one man stood out as the master of those divisions. But soon the Wokefinder General would be replaced by another, the one  they would call the Free Speech and Academic Freedom Champion.

Terms of use: this is a free email for fun on a Friday. It should be shared widely like your flatmate’s mum’s Netflix password during lockdown. Want to order multiple copies of Uncle Tom’s Cabin for your library? Email: ivorytower@researchresearch.com