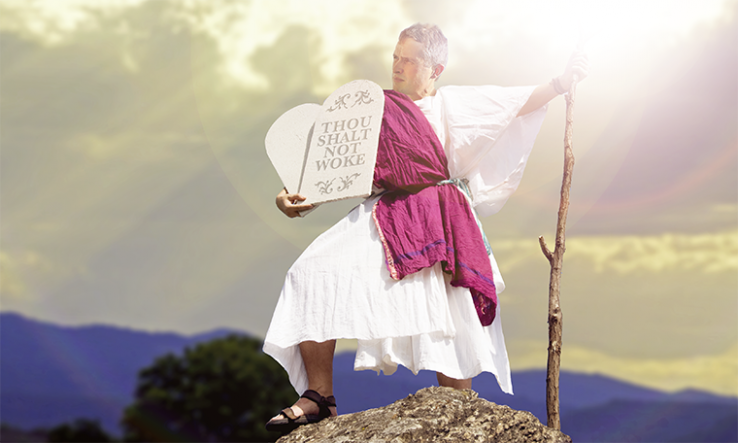 And lo, there was a great wailing and gnashing of teeth among the tribe of the academicals for plague did ravish the land and for 400 days and nights the people did bide within their tents and teach online via Zoom.

At this time, there rose a leader in the land of the academicals, named Gavin, begat of William. Wherever Gavin walked he carried a whip made from the skins of snakes to remind the people that he knew of their past sins. He was robed in a mono-coloured raincoat and beret, and the people said of Gavin, truly some mothers do have them.

The tribe of the academicals at this time were sorely tested by the Lord. The temple which held the shekels for alms to the elderly was empty and no one could agree what to do.

From among the people came a woman named Jo, who did speak with Gavin about the temple, and the plague, and the annual pay round.

Jo did stand before Gavin and plead for the tribe of the academicals, saying, “Bail my people out”. But Gavin sayeth, “Are thou not a zealot from the land of Ucu? Whatever happened to that nice chap Ali Jari?”

But Jo replied, “The academicals have now abided in their tents for 400 days and nights, it is time to let my people go”. Gavin sayeth, “But where wouldst they go at this hour?” And Jo cried to the Lord in a voice of thunder, “Let them abide in their tents a bit longer until the plague has truly lifted and then we can discuss a phased return to campus and flexible arrangements for home working”.

But Gavin did shake his head and say, “The yoongsters must pick up their tents and walk out into the desert for it be perfectly safe as long as they make their ablutions and cover their faces.” And Jo did sigh and say, “Yoongsters?”

Gavin wrapeth himself in a long piece of cloth that was used as a standard for the people and sayeth, “All shall be well, for we will be saveth by AstraZeneca”. But Jo did shake her head and say, “Thou makest a false God of AstraZeneca when thou still hath not a functioning track and trace system”. But Gavin’s ears were closed to her cries.

Next into the tent of Gavin came Ali Jari, from the land of Uuk. He sayeth unto Gavin, “Bail my people out”. But Gavin did shake his head again and sayeth unto Ali Jari, “Makest thou the tents of the people plague secure, and telleth them to go out into the desert for it be perfectly safe”.

In return Ali Jari sayeth, “We have melted down the golden calves and spent many shekels making the tents of the people plague secure, but now we implore you that when the young people come of age this year, you maketh not the pig’s ear of it that you did last time”.

But Gavin calleth his servant Wharton, who brought a large bowl for the making of ablutions. And Gavin did cleanse himself and sayeth, “I hereby wash my hands of this, and if there be another A-Level fiasco it be the fault of the scribes and the scholars. For I will be resting in the borough of Scabs when it happens, again”.

“And what of the temple of Uss?” sayeth Ali Jari, “Whilst thou say something to the Pharisees who regulate the alms for the elderly, for the covenant is strong and we have no more shekels to give to the temple”. But Gavin shook his head and sayeth, “’Tis nowt to do wi’ me”.

A great unrest came across the tribe of the academicals and the people sayeth that Gavin knows not what he doeth and that he should be sacked in the morning. The woman named Jo sayeth, “The people will withdraw all labour if this goes on much longer”. And the man named Ali Jari sayeth, “The covenant be as strong as ever, the Pharisees must relent”. And the Pharisees sayeth, “Not on your Nelly, Ali Jari”.

And darkness covered the land.

Gavin was sick at heart as children did follow him in the street and call him by his Roman name, which was Frankus Spencerus. So, unknown to the people, Gavin did go out into the desert to seek wisdom from the Lord.

Gavin had not travelled far when he came upon a bush burning in the desert. He was afraid at the sight and cried out, “Burning bush!”. There came a voice, “Crickey! Blimey! Where?”. But Gavin did not understand for the voice came from within the tree itself.

“Salutations Gavin,” sayeth the voice, “I am thy prime minister, cover thy face and cometh not closer unless you’ve had your AstraZeneca thingymebob”. Gavin did pull his beret over his eyes for he was afraid to look upon the magic moany tree.

“I have seen the suffering of the tribe of the academicals and to be honest I am not that fussed,” sayeth the voice, “but we must be about our business of levelling-up, so taketh back to them a gift from me”. And Gavin did fall upon the ground because he tripped over a rock and that was very much in keeping with the Frank Spencer thing.

“But what wilst thou give the academicals, for they say they have no shekels for their temple, no mana from heaven, that the covenant is broken, and that they are right fed up with abiding in their tents?” sayeth Gavin unto the bush. The voice sayeth, “I will make of them a gift that was left by Dom the prophet, who rendered his wisdom unto me, and explained that what they really need is another innovation agency but one without scrutiny or red tape”. And Gavin sayeth, “Oh Lord!”

When Gavin came down from the desert, the people were sorely afflicted and they did hiss at Gavin in the street, saying who will rid us for this useless minister?

Gavin did take the long piece of cloth used as a standard for the people, hung it from a rock and declareth to the assembly, “Sing a new song unto the Lord for he has witnessed your suffering and now bestows upon you Aria, a high-risk, high-reward innovation agency”. And the people did throw moulded fruit at Gavin, saying, “If the Lord loves us, he hath a funny way of showing it”.

But Kwasi of the tribe of Beis sayeth unto Gavin, “That be our Aria, promised to us long ago, as foretold by Dom the prophet, in a 4,000 word blog post”. Kwasi tooketh Aria from Gavin, and turning to his faithful Beis servant sayeth, “Why, why, why Amanda?”

She stood there laughing, and Gavin sayeth, “Forgive me Amanda I just couldn’t take anymore”.

Then the woman named Jo sayeth unto Gavin, “Hast thou anything else up thy sleeve because the people are still gnashing and wailing their teeth?”.

And so Gavin went unto his tent and came back with a scroll. He placed the long piece of cloth used as a standard for the people around his shoulders and stood upon the rock, saying, “I have new commandments for the tribe of the academicals”. And the people did fall silent as they listened to Gavin preach.

When he had finished speaking, the people let out a cry and there was much wailing and gnashing of teeth.

And darkness covered the land.

Terms of use: this is a free email for Easter holiday fun. It should be shared with friends like a Mayor of London’s technology grant. Want to order a tea towel of Gavin Williamson’s tin commandments? Want to say hello? Email ivorytower@researchresearch.com