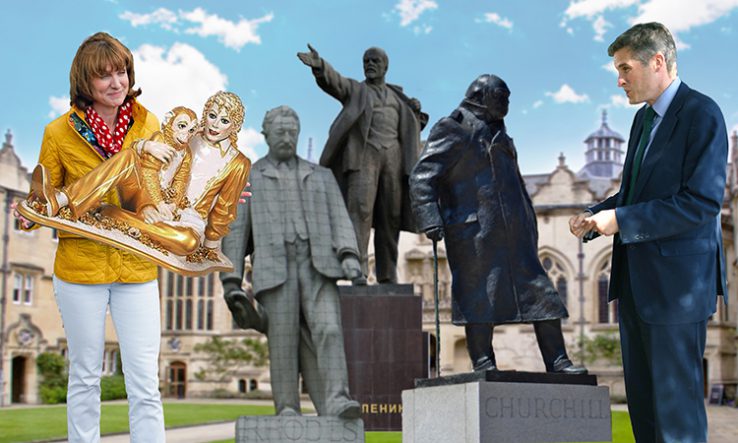 Ivory Tower: a special edition of the favourite antiques programme from the University of Oxford

Presenter: I’m Fiona Bruce—no, don’t worry it’s not Question Time. This week the Antiques Roadshow comes from the grounds of beautiful Oriel College in the county of Oxford. Oriel is the oldest royal foundation in Oxford and has a proud history dating back to Edward II with many notable alumni, from Sir Walter Raleigh to Countdown’s Rachel Reilly and Brexit’s Daniel Hannan—but still you can’t have everything. With me to help value the objects that the public bring in today are secretary of state for education and statue expert Gavin Williamson and universities minister and history graduate Michelle Donelan. How does it feel to be in Oxford, Gavin?

Williamson: Proud. I’m just so very proud to be in Oxford, home of the Boris vaccine.

Williamson: We thought that was a bit of a mouthful, and it is so popular that we’ve decided just to call it Boris. But you know Fiona, I’m so proud of Oxford, the British Oxford really is the best Oxford in the world, not like all those other Oxfords in Massachusetts, Ohio, and New Zealand.

Bruce: Come back David Dickinson, all is forgiven. And you Michelle, what are you looking forward to seeing today?

Bruce: And you thought Laurel and Hardy were the biggest chumps at Oxford. First up today, we have the master of Oriel College who has brought in something rather special. What is it master?

Master: It’s a life-size statue of one of our alumni.

Bruce: Thank God because some things are just totally unacceptable.

Master: It is part of a group of seven statues commissioned for the building from the sculptor Henry Pegram and bears the inscription “E LARGA: MVNIFICENTIA CAECILII RHODES”, which, as well as acknowledging Rhodes’s importance, it is also a chronogram revealing the date of its creation in 1911.

Bruce: “Munificentia”? What does that mean?

Master: munificence, generosity, bountifulness, largesse. He was a great philanthropist and endowed the famous Oxford scholarship scheme as well as Rhodes University in South Africa.

Bruce: That’s amazing, so how did he come by this wealth?

Master: A monopoly on diamond production in colonial South Africa, the expropriation of land from Black South Africans, barring Black people from voting, and the formation of Rhodesia as an apartheid state.

Bruce: Mmmh…so basically, you’re saying he was a giant racist. Right, one for you I think Gavin. What is the value of this statue?

Williamson: I’m so glad the college has decided to keep this statue.

Williamson: Yes, under our new retain and explain laws, all our statues will be preserved for future generations.

Bruce: All of them?

Bruce: Even the statue of Michael Jackson stashed in the basement of the National Football Museum?

Williamson: You would need an encyclopaedia to explain that one.

Bruce: But dead racists are ok?

Williamson: You see Fiona, it is the common-sense decision to retain this beautiful statue of Cecil Rhodes, one of our very best diamond traders and colonial warmongers.

Bruce: Beautiful? It looks like a dodgy accountant about to jump from the roof.

Williamson: In many ways, it reminds me of my time in the fireplace business.

Bruce: So, what value would you put on this statue?

Williamson: As a symbol in the culture war, it’s priceless.

Bruce: Next up, we have the permanent secretary from the Foreign Office. Thanks so much for coming, what have you brought in?

Permanent Secretary: It’s a life-size statue of the first Baron Clive which stands a few hundred yards from our building.

Bruce: How lovely…Michelle, I believe you have been looking into this?

Donelan: Yes, I’ve looked out some of my old lecture notes from my course at York. Baron Clive invented the internet… no wait that’s not right…let me just check, here…he invented British computers and electric cars. So that’s pretty amazing.

Permanent Secretary: Robert Clive, sometimes known as Clive of India, established the power of the East India Company, securing British domination over the sub-continent for 200 years, while amassing a fortune of over £2billion in modern terms.

Bruce: I think I might regret this, but I’m guessing he didn’t amass that fortune selling vegan ice cream?

Bruce: I see, over to the experts.

Williamson: It really is a magnificent piece. It is just so quintessentially British, when you walk past it in Whitehall and see the nondescript male form above the word “Clive”, one thinks of so many other great Clives: Clive Dunn, Clive Allen, Clive Anderson…

Williamson: No, not him. There’s the actor Clive Owen and of course, the wonderful British scientist Clive Sinclair. This really is a statue to all the Clives. I’m very glad it will be saved for the nation. I say, live and let Clive.

Williamson: Are you taking the plinth?

Bruce: Perhaps, you can understand why some people might not think it is a good idea to celebrate the architect of the Bengal famine, which killed 10 million people.

Williamson: Retain and explain, Fiona. This country has a long history of opening its doors and welcoming what India has to offer.

Williamson: And it’s a tradition that the UK Border Force and the Track and Trace system is keeping alive today.

Williamson: I keep telling those historians: you can’t rewrite history.

Bruce: Thank you so much, permanent secretary. Next up is the head groundskeeper at Highgate Cemetery. What have you brought in?

Groundskeeper: This has been sitting in a corner of the cemetery for as long as I can remember. I believe it used to be popular in the 1960s but has rather fallen out of fashion now. I’d like to know if it is worth anything.

Bruce: Let’s have a look. It’s rather large, how did you fit it in the car? I can see it’s a giant bust. Who is it? Looks like Santa Claus…

Groundkeeper: It’s Karl Marx. You can tell from the inscription, “workers of the world unite”, which I believe was one of his catchphrases.

Bruce: Fascinating. Michelle, what do we know about Karl Marx?

Donelan: Karl was one of the famous Marx Brothers troupe who made comedy films in black & white times. He left the family business after he he fell out with brother Harpo over a gambling debt.

Bruce: Where did you study history, Sweet Valley High?

Williamson: Oh no, this is all wrong. It’s absolutely worthless, take it away, throw it in the sea.

Bruce: What about retain and explain?

Williamson: That only counts for British statues. This one is of an immigrant, and a writer, an intellectual…it’s all so woke. What did Marx achieve in contrast to someone like Clive?

Bruce: You could say communism was responsible for the deaths of millions of people.

Williamson: Well, then again, it could have some merit…Daniel Hannan might take it off your hands for the Museum of Communist Terror.

Williamson: Or give it to the Museum of Brexit.

Bruce: Finally, we have the vice-chancellor of the University of Winchester. What have you brought for us?

Vice-chancellor: It’s a modern piece, but I’d very much value the ministers’ opinion.

Bruce: First time for everything.

Vice-chancellor: I think it’s just so inspiring, Greta is such an icon for young people.

Bruce: Ah yes, I see it now, it’s Greta Thunberg. I thought it was a shop dummy from the teenagers department at C&A. Gavin, what do you think of this?

Williamson: This is not a suitable thing for a university to put in front of yoongsters.

Williamson: As I said, that only applies to British heroes like Edward Colston, Greta Thunberg is a teenager from the EU. She has no business on a British university campus unless she is prepared to pay full international fees.

Bruce: Michelle, surely you don’t think the vice-chancellor should tear down his statue?

Donelan: Well, he’s going to have to make space so that the Holocaust deniers can park their cars when they come to give a talk at the student union.

Bruce: Hugh Scully never had to put up with this. Gavin, sum up the day for us.

Williamson: It’s just so disappointing to see all these woke figures inserted into our proud British history.

Bruce: You are going to love it when you find out about Edward II.

Williamson: Was he the Nazi one?

Bruce: No, just google him. What about you Michelle, what have you enjoyed today?

Donelan: Yes, it’s been so good to see people decolonising their wardrobes and bringing in their old junk for us to look at.

Bruce: Next week we are in London to look at some marbles in Bloomsbury. Can’t wait, see you then.

Terms of use: this is a free email for fun on a Friday, it should be shared with friends like seats on the board of the BBC. Want to ask Gavin Williamson to value your Sylvanian Families collection? Want to say hello? Email ivorytower@researchresearch.com