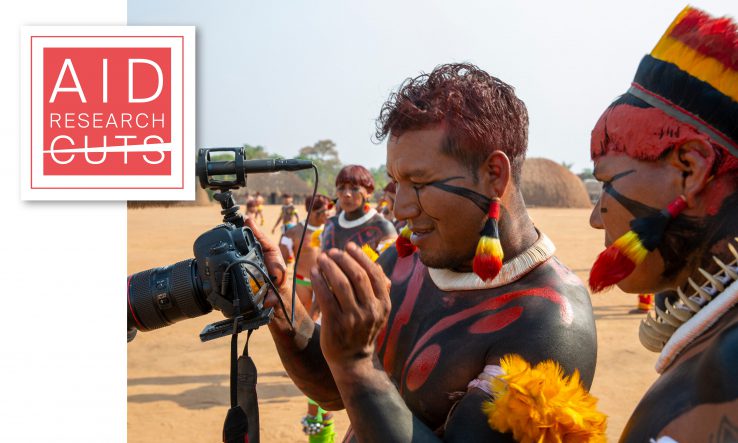 We, the Kuikuro, from the Xingu indigenous territory of the Amazon region, made news worldwide last year for being the first indigenous community in Brazil to beat Covid-19. The village is now fully vaccinated. We had 103 cases last year in our villages, out of 600 residents, but managed to avoid any deaths.

This is in stark contrast to other indigenous communities in Brazil, which have suffered disproportionately. More than 52,000 indigenous people have been infected and over 1,000 have died, including leaders who were guardians of the forest and living memories of our knowledge, stories, culture and rituals.

While we still face existential threats such as deforestation and fires, we feel fortunate to have been spared the worst of this pandemic, thanks to our own efforts and the support we received from People’s Palace Projects (PPP), an arts research centre for social justice based at Queen Mary, University of London.

Our UK partners, who are funded partly by the Global Challenges Research Fund and the Newton Fund, helped us to navigate this crisis, raising more than £32,000 in the UK and R$22,000 (£3,000) in Brazil, and enabling the Kuikuro people to remain isolated during the pandemic.

The cuts the British government is making to international research funding will jeopardise our ability to meet future threats. The artistic and research partnership between the Xingu and the UK stretches back more than six years. Foreign artists have come to our village and our artists have travelled to London.

With PPP opening up frontiers for the Kuikuro, my work, as a filmmaker (pictured) researching and documenting indigenous cultural heritage, reached an international audience through festivals, exhibitions, galleries and museums.

These international collaborations took us to Madrid to unveil a facsimile of the Kamukuwaká cave, the most sacred site for the 16 indigenous communities of the Xingu territory. The cave was vandalised in 2018, most likely as a result of conflict between indigenous and farming communities.

The worst of this pandemic is now over in our territory. But—with two Kuikuro arts installations produced in collaboration with PPP set to be shown at the Venice Biennale and COP26 in Glasgow—we fear for our future because of the cuts to the UK’s international research funding.

Covid-19 proved that the impact of UK research funding went so much further than the production of academic scholarship. PPP is an important ally in the preservation of our lives and culture and against the destruction of our tropical forests. Queen Mary, University of London, is an ally of indigenous peoples in the global struggle to preserve the natural world from climate change.

Without this support from the UK, we are alone with an anti-science and anti-environment Brazilian government that has said openly and repeatedly that indigenous lives and the preservation of the Amazon forest don’t matter. The funding has made an incalculable difference to our lives in the past six years, more than ever in this global pandemic, but our fight is the world’s fight, too.

Takumã Kuikuro is a filmmaker and research fellow at Queen Mary, University of London