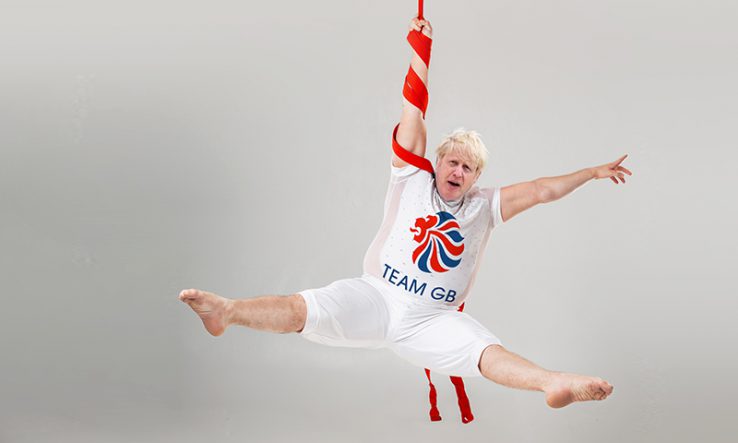 BBC disclaimer: Due to a new broadcast rights deal, all events at the Higher Education and Research Olympics will move from face to face to online delivery. If you are dissatisfied with this experience, you should first of all slap your television and shout, “What’s wrong with this thing?”.

If that does not resolve the issue you are entitled to complain* to the independent adjudicator. If you are still not satisfied you can seek legal redress through the courts**. Also, due to the Covid-19 pandemic no fans are allowed in the stadia, so you might as well be watching your kids in the local sports hall. No refunds. Terms and conditions apply.

*Average waiting time for a judgment 12 months
**Good luck with that, suckers

Presenter: Good morning from Tokyo, I’m Clare Balding—don’t worry it’s not Countryfile. Welcome to day five of the Higher Education and Research Olympics. Overnight team GB had some success in the pool, with news that the pool of applicants for British universities has grown for the second year in a row.

But will today be gold rush Friday for the UK? There are so many big events involving some of our strongest performers. I’m joined by actual Olympic medal winner Rebecca Adlington, who knows a lot about higher education because she was inexplicably a face of the doomed and almost forgotten Made at Uni campaign. What are you looking forward to Rebecca?

Adlington: People finally forgetting about the Made at Uni campaign.

Balding: The last time these games were held, Team GB was mired in controversy.

Adlington: Yes, so many golds and silvers, and the inevitable complaints about grade inflation in the medal table. It is important that the value of a gold award is held up over time.

Balding: Unless it’s in the Teaching Excellence Framework, in which case you are now not even allowed to use it in promotional videos with your sponsors. This is also the first Olympics to introduce a fourth category of medal alongside gold, silver and bronze. How has that gone down with competitors?

Adlington: I don’t think anyone is looking forward to earning a medal for “insufficient excellence”.

Balding: On the other hand, the newly designed podiums are twice as big as they used to be. Let’s go over now to Gary at the gymnastics, where Team GB have high hopes.

Gary: Thank you Clare, yes British universities are truly world class when it comes to gymnastics. Our vice-chancellors have made bending over backwards very much their own in recent years. No matter the challenge or ludicrous nonsense presented to them by the government, they always manage to bend over further than a limbo dancer on the Rialto Bridge. That event is to come later in the week, along with the contortions and linguistic gymnastics at which British university managers so often excel.

But today sees the Team GB captain and rhythmic gymnast Boris Johnson participate in the pole event. Apparently, he has been coached intensively by the great American exponent of the discipline Jennifer Acuri. And here he comes now, dressed in a fetching union jack leotard. He takes his position at the pole as we wait for his routine to start. He will be performing to a great British soundtrack of a medley of Right Said Fred and Van Morrison.

Oh, my days! That’s extraordinary, I’ve never seen anything like that before. Rather than perform on the pole, Johnson has flip-flopped all over the place and eventually crashed into the water cooler. The judges have put up their scores: 0.0, 0.0, 0.0, 0.0, 0.0 and 0.0. Amazing, that’s the best pole ratings he’s seen for nearly 18 months.

Balding: We’ll keep an eye on how things turn out in the gym. Let’s now go over to another Gary at the rowing. How is it going there?

Gary: It’s been a great morning here for Team GB. Star performer Gavin Williamson has been rowing back like a champion and has won gold in the 10,000m U-turn. That’s a world record for how far away you could see the U-turn coming with the naked eye. He joins me now. Gavin, many congratulations that was quite the U-turn.

Gavin: I’ve been practising a lot and it was especially pleasing when it looked like we might be in trouble that I was able to throw my permanent secretary and the head of Ofqual overboard and come out ahead.

Gary: So much strength in depth in this UK rowing back team? Later today, the chancellor and prime minister go for a record in the speed U-turn event, following their performance in the Whitehall randomised trial.

Gavin: Yes, and on this one they won’t even have Marcus Rashford standing on the side lines haranguing them.

Gary: On a personal note, after this latest spectacular U-turn Gavin, do you think that is the end of your career?

Gavin: It’s never stopped me before. I feel in top form and think we can look forward to a summer of even bigger U-turns. I’ll be hoping to do the double at the A-level fun and games later this month and in September I’m preparing for a record-breaking volte-face over student vaccinations.

Gary: Gavin Williamson there, they call him the fireplace because just when you think he’s on his way out somehow he still manages to burn you. Back to you, Clare.

Balding: It’s beginning to look like one of those memorable days for Team GB. Let’s head now to the diving, with… err Gary.

Gary: Thank you Clare, it’s been quite a morning for Britain. We’ve seen income to our universities take a nosedive, and our research budgets have been doing somersaults. But our big hopes lie in the pension fund plunge. The British team of Jo Grady and Alistair Jarvis go in the synchronised free fall. There have been rumours in the training camp that this pair were barely on speaking terms but here they come now to take their place at the edge of the precipice.

A silence falls as they look into the abyss. Jarvis is bent double; Grady is ready to strike. And there they go… Oh, what an extraordinary dive. Half-way through the descent Jarvis and Grady seemed to disagree on the size of the hole they were heading towards. Grady wanted the gap to be remeasured, twice, and then the British pair started pulling in opposite directions. The results are coming in from the judges, and just look at those numbers: 30.7, 31.2, 37.6, and 56.2. I’ve never seen joint contribution rates like that. Another triumph for British universities.

Gary: We’ve already had a winner this morning in the individual pursuit. That was Paul Nurse who actually managed to lap himself by reviewing the research landscape set up after his previous review of the research landscape. Later today, we are hoping for British success in the hurdles. We’ll be hoping that the UK government will be putting even bigger hurdles in the way of our universities.

Then there is the conclusion of the modern pentathlon: the REF, the TEF, the KEF, HESA stats and UCAS numbers. British universities will be looking for success in those disciplines. Unfortunately, it looks like the Free Speech Relay has been cancelled.

Balding: That’s very disappointing, we had big hopes there with the UK team of Amber Rudd, Toby Young, Guto Harri and Brendan O’Neill. I guess none of them will be getting on the platform.

Gary: There’s always GB News, I suppose. But sadly, the UK will have to wait for its first Free Speech champion.

Balding: What else can we look forward to today?

Gary: We have big hopes for Amanda Solloway and Michelle Donelan who as science and universities ministers compete against one another in the three-legged race. And in a late change to the team, we are hearing that Nicola Dandridge is back to throw hammers and javelins at universities, while Matt Hancock is for the high jump.

Then later tonight Chris Whitty and Patrick Vallance take part in the two-man bob, in which they’ll be gritting their teeth and nodding along to whatever nonsense comes out of the prime minister’s mouth at the Downing Street press conference.

Balding: A lot to look forward to there. Also coming up for staff in UK universities we’ve got heavy lifting, wrestling, boxing and, of course, the marathon. However, we are just getting news of a positive test among Team GB. Let’s go straight back to Gary, what kind of drug was it?

Gary: Clare, it isn’t a positive drugs test, it’s a PCR test for coronavirus and now the whole of Team GB will have to go into quarantine.

Balding: Isn’t there some kind of pilot they could join?

Gary: It looks like someone picked up the virus on the plane, so the pilot will be self-isolating as well.

Balding: Thank you Gary. I suppose there’s always the cricket to look forward to. Have a great summer everyone. I’m going back to Celebrity Gogglebox.

Terms of use: this is a free email for fun on a Friday. It should be shared among friends like places on a randomised testing pilot. Want to order a Matt Hancock “Who cares?” pin badge? Want to say hello? Email ivorytower@researchresearch.com