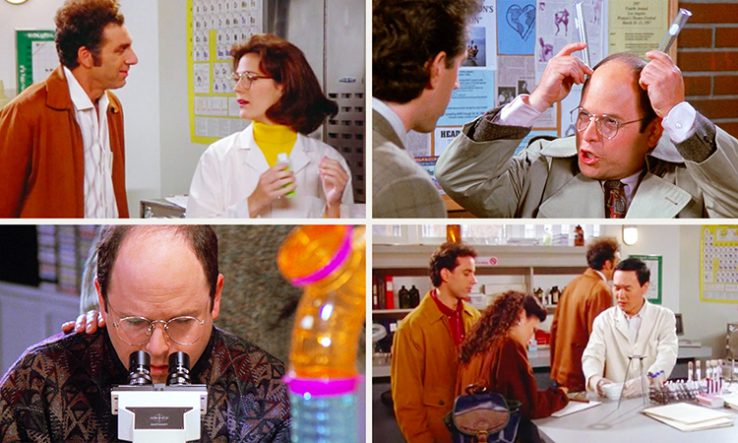 Tell us more, Mr Science. The streaming service Netflix is reportedly making the entire hit 1990s comedy series Seinfeld available globally this autumn, after it bought the rights on the 30th anniversary of the series’ first airing.

For millions of fans, Seinfeld makes great viewing, but if they look closely they will discover a rich subtext illustrating how science is represented in popular culture.

As a long-time Seinfeld fan, I’ve noticed that the sitcom is packed with nuanced references to science. In seasons 1 and 2 alone, 15 out of 18 episodes make a scientific reference. So I took a closer look at how Seinfeld represented science, and published my findings in the Journal of Science & Popular Culture.

Others have previously explored the science behind specific scenes in Seinfeld: finding out whether licking old envelopes really can kill you, as they killed George’s fiancée Susan in ‘The Invitations’, or if you would fail a drugs’ test after eating poppy seed bagels, as Elaine did in ‘The Shower Head’? (No, and yes, it turns out).

Some people have been inspired by the sitcom. There is a real-world medical practice called Dr. Pimple Popper, a name first coined in ‘The Slicer’ episode. And in an effort to expose a predatory journal, scientists wrote a paper about uromycitisis—a made-up medical condition that the character Kramer invents in ‘The Parking Garage’ under the fake persona of Dr. Martin van Nostrand.

But few have looked specifically at how the sitcom represents the world of science itself. I’ve found that Jerry Seinfeld incorporates references to science into his humour, thereby mainstreaming it while also often poking fun at it.

Take this example from the ‘The Face Painter’ episode where Jerry, in his opening stand-up joke, says: “Monkeys, of course, were the first astronauts in the ‘60s, which I’m sure made perfect sense in the monkey brain: ‘Maybe that is the next logical step for me, because I’ve been working with the Italian guy and the crank organ, I think I’m ready to handle the maximum re-entry g-forces.’”

In other episodes, he makes fun of researchers who develop seedless watermelons rather than focusing on curing HIV/Aids or cancer, and wonders whether geneticists would be able to engineer ponies even smaller so you could use them as live Monopoly pieces.

Academics have argued that the format of stand-up comedy, where the speaker is elevated and the audience remains largely silent, potentially reinforces the one-way communication of science. In Seinfeld, though, Jerry comes across as one of us and uses his stand-up platform to examine, challenge and even ridicule aspects of science.

A lot of these skits then, while absurd, contain elements of truth. They demonstrate that some scientific ideas have become common knowledge—as they must have if a sitcom can refer to them without seeming elitist.

Seinfeld casually references Biosphere 3, Dian Fossey, and “tungsten or wolfram”, and presents science as cool, breaking with the cliché of TV scientists as socially awkward singletons. Jerry dates a political scientist in ‘The Pilot’, Kramer falls for an FDA chemist in ‘The Non-Fat Yogurt’, and George gets a date by pretending to be a marine biologist (the date dumps him when she finds out he’s not) in ‘The Marine Biologist’.

Characters in Seinfeld are able to admire science in general while poking fun at its need for detail. Take the following exchange from the marine biologist episode: George: “I’m such a huge whale fan. These marine biologists were showing how they communicate with each other with these squeaks and squeals. What a fish!” Jerry: “It’s a mammal.” George: “Whatever.”

Seinfeld frequently uses scientific terms, imagery and situations to pursue comedic goals, rather than teach audiences about science—though it can communicate science along the way. For example, correctly identifying a whale as a mammal, not a fish, is used for comic effect, revealing the limitation of George’s supposed enthusiasm for marine biology. But other opportunities to correct ignorance about scientific facts are missed, for example, in ‘The Face Painter’. When Jerry and Kramer talk about Barry, the chimpanzee who insults Kramer by throwing a banana peel at him, they refer to him as a monkey rather than an ape.

Livin’ with the turtles

In ‘The Marine Biologist’ episode, Jerry describes George as a “damn good” marine biologist who “is specialising in whales” to impress Diane, an old college friend who thinks George is a “goof-off”.

“He’s working on lowering the cholesterol level in whales. All that blubber—quite unhealthy,” says Jerry. “You know it’s the largest mammal on Earth but, as George says, ‘they don’t have to be’”. It’s funny because it’s doubly false: George is not a marine biologist and whales do need their blubber to survive in cold waters, just as they do, indeed, need to be big.

George takes up the gauntlet, informing Diane that he just came back from the Galapagos, where he was living with the turtles, and goes on to impart a completely made-up piece of science: “Then, of course, with evolution the octopus lost the nostrils and took on the more familiar look that we know today. But if you look really closely you can still see a bump where the nose used to be.” When Diane enquires, “Really?” George changes the subject: “Yeah, but enough about fish, I can talk about other things, like… architecture?”

When talking to Jerry about turning him into a scientist, George protests: “Why couldn’t you have made me an architect? You know I always wanted to pretend that I was an architect.”

What’s implicit in this is the view that architecture is a respectable job, unlike marine biology which, it is implied, is more difficult and unusual as a career. George tells Jerry: “You put me in a very difficult position. Marine biologist! I’m very uncomfortable with this whole thing … You got me in the Galapagos Islands, livin’ with the turtles—I don’t know where the hell I am.”

So, being a marine biologist seems respectable enough for George to get a date, but is ranked below an architect, and is variously questioned as a job, both easily fudged and difficult to pull off.

Experiments to ‘illuminate the mind’

George is perhaps vindicated in ‘The Abstinence’ episode, where abstinence turns him into a super-smart intellectual who foregoes talking about his career with the Yankees in favour of science. He says: “Oh, sports are so pedestrian. I’ve prepared some science experiments that will illuminate the mind and dazzle the eye.”

As a scientist, he acts aloof and elitist, calling Jerry “a simple man”, and talks about “serving the world”, perhaps hinting that scientists are beyond the scope of ordinary men who may ridicule them. In this, we see a more common, ivory tower view of science.

Seinfeld often tackled the difficult issues of scientific expertise and method, using it for comedic effect while also potentially reflecting society’s varied and multifaceted attitudes towards science. What makes the series important is that it goes beyond the obvious clichés and represents a more nuanced, humanised view of science. Scientists are fallible men and women with private lives, whose work and results can be influenced by other people: they even make mistakes. But at the same time, we turn to them when we need experts: to save whales, test our food, etc. Scientists are admired, but also made fun of. They are inspiring but also lofty.

There was some prescience in Seinfeld’s references to science. Jerry’s jokes about seedless watermelon research or the genetics of miniature ponies still resonate today, when scientists continue to work on seedless fruits for agriculture and micro-pets. So, perhaps Jerry’s take on science wasn’t as silly as it might have seemed at the time.

Next time you watch Seinfeld, keep an ear out for science—you may discover a whole new layer to the classic show.

A selection of references to science in Seinfeld