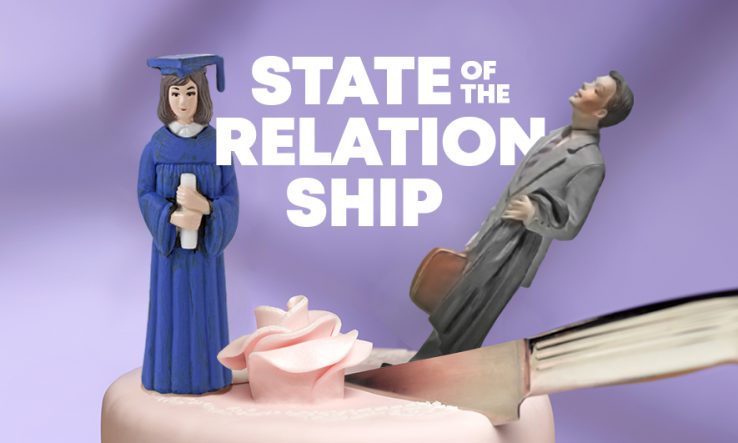 Ivory Tower: As NCUB’s annual report is published, we meet a couple in marriage therapy

Business: Do we have to do this?

B: We don’t need couple’s therapy, can’t we just go?

U: The appointment has been made now. It would be rude.

B: Seriously? We’ve both got a lot on, can’t we just leave it?

U: There you have it.

U: You never have time.

U: For us, for this relationship.

B: Not this again.

U: We should talk about our relationship.

U: You wanted to walk out a moment ago.

U: On this relationship?

B: Always making everything so complicated.

B: It’s time-consuming and boring.

U: Partnership is boring?

B: I’m accountable. I just don’t need to sit in a committee for two hours to make a decision.

U: Accountable only to yourself.

B: That’s unfair. I pay taxes. I have shareholders. What do you have?

B: What does that even mean? You get a fat pay cheque from the government just to sit there and never change.

B: When was the last time you did anything different?

U: I’m working with the community… as part of my civic mission.

B: You did that anyway. You’ve always done that.

B: It’s called doing your job.

U: And what about you? What have you done that’s different?

U: You’ve stopped doing your job?

U: Not this again.

U: I know exactly how hard it is. I’ve been waiting nearly three years to join the R&D programme.

U: Where were you during the referendum?

B: I thought we were over this.

U: If you had said something at the time, it might have been different.

U: It was totally your place.

B: You’re better at that sort of thing—speaking out, saying how you feel.

U: And look where it got us.

B: Hasn’t done you any harm.

U: Haven’t you heard of the culture wars?

U: Woke? You’ve got to be kidding me.

U: You’re all about diversity and inclusion when it comes to advertising and selling things. Can’t get enough of it then.

B: It’s about future markets.

U: You’re not the one that’s been landed with a bill.

U: I meant the free speech bill.

B: Sorry, is there anything I can do?

They sit in silence for a beat. A waitress comes to the table.

Waitress: Can I get you anything?

U: I don’t believe this.

U: Two teas, thanks. You always have tea. It’s been the same order since I first met you.

B: What’s your name?

B: Are you new here?

Waitress: I’ve not really started yet. This is kind of a trial.

B: You seem very responsive.

Waitress: I was trying to do things a bit different. Sorry, what was your order again?

U: Were you flirting?

B: It’s called due diligence, not something you would know anything about.

U: You were practically drooling.

B: At least she didn’t want to set up a committee to discuss whether the milk should come in a jug.

U: She didn’t even have a notepad.

U: She couldn’t remember an order of two teas.

U: What does that mean?

B: You never forget anything.

B: You never forget anything, so you can never move on.

B: See, my point exactly.

U: If you’d said something about Boris we wouldn’t be here.

B: Waiting to see our therapist?

U: No, here, in this mess. This car crash of an economy.

B: You know what Boris said about me.

U: The image is seared on my brain.

U: He might have said it about you, but he did it to me.

B: You are so full of self-pity. How are you worse off now than you were five years ago, ten years ago, even?

B: Here we go. Tell us about all those graduates you churn out who are not fit to work.

U: They have transferable skills.

B: Not to the workplace.

U: I’ve been listening to this for decades. You train them then, see how much it would cost you.

U: Or the expertise, or the space, or the opportunities.

U: It’s not mine either, but I still do it. And do I get any thanks?

B: I appreciate it.

U: Funny way of showing it.

B: Look, there’s a skills shortage. It’s tough for everyone.

U: You can’t even take on a few apprentices—too busy making value for your shareholders.

B: Hi, Aria. That was a quick turnaround.

Waitress: Did you want milk with that?

B: Hold on, the milk committee will approve its minutes in three months’ time.

U: Yes, I asked for milk with the order.

Waitress: Sorry, I’m new to this. Maybe I should have made notes.

B: You are doing fine Aria, don’t let old “taxpayers’ money” here drag you down.

U: Actually, can we have these to go? It’s time for our appointment.

The waitress takes the teas away.

U: You can’t help yourself, can you?

U: You’re not going to bring this up again.

B: Cutting back on tax credits for R&D is going to be the end of us.

U: I don’t get tax credits.

B: You don’t innovate.

U: Excuse me? What do you think I’ve been doing all these years?

B: I just meant you are backed by the taxpayer.

U: Unlike tax credits? The clue is in the name.

B: You’ve no incentive to take risks.

U: How is claiming tax relief on the CRM system you were going to install anyway taking a risk?

B: My accountant said that was all above board.

B: Do you have a number, Aria? Maybe I could call you.

The couple look at each other and then back at the waitress, pointing at one another.

Terms of use: this is a free email for fun on a Friday, it should be shared among colleagues like the blame for a heavy by-election defeat. Want to book a couple’s therapy session with your line manager? Want to say hello? Email ivorytower@researchresearch.com