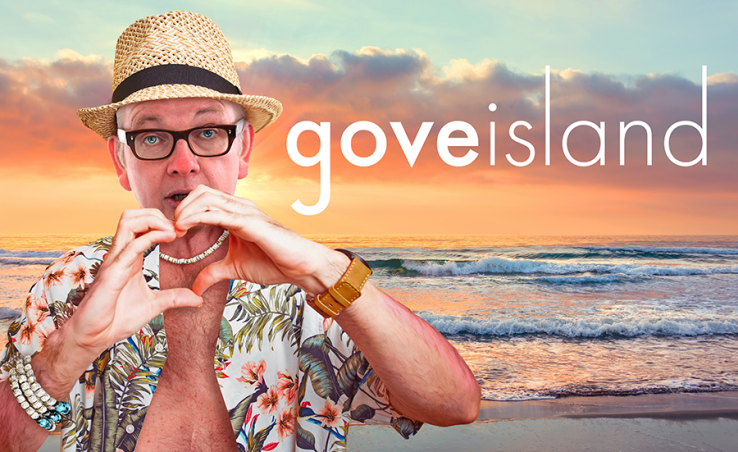 Ivory Tower: Back for a new series, the sizzling reality TV hit of the summer.

Narrator: Previously on Gove Island, there was a departure.

Oliver: Someone needs to take responsibility for this mess.

Narrator: But who will take their place?

Boris: Can Carrie be chair of the Conservative Party?

Narrator: After last night’s dramatic vote, the residents of the villa are trying to make sense of the results.

Rishi: No, never mind. The question is, what is anyone going to do about it?

Kwasi: You should say something.

Rishi: Me? What would I say?

Kwasi: That you are interested and want to crack on.

Kwasi: If you don’t say something someone else will.

Rishi: Yeah, but no one fancies Jeremy Hunt so that’s not going to happen.

Kwasi: Now that the votes are in there is an opportunity to mug him off and take his place.

Rishi: I’m not a player though. I wouldn’t want anyone to think I was leading them on.

Kwasi: Looks like the water isn’t the only thing that’s bottled in here.

Narrator: This week Mick entered the villa and he’s done everyone’s hearts with his smooth talking.

Mick: Priti, you really do talk twaddle at times.

Priti: But are you a Martian, though?

Liz: What’s that then?

Liz: No, a trades union.

Priti: What is it you Martians want?

Liz: Well, we can understand that, have you thought about a second job as a lobbyist?

Priti: What’s your type then, Mick? What are you after in here?

Liz: From someone who is really into you?

Mick: No, on compulsory redundancies.

Priti: Oh, I think we can commit to those.

Narrator: Meanwhile, over by the pool Michelle and Nadhim are talking about one of the Owen family.

Nadhim: If I had my way, I’d put Philip Larkin and Wilfred Owen back on the GCSE curriculum.

Michelle: No, I meant… never mind.

Michelle: For his medal in the war and that?

Nadhim: Err… yeah. And it’s a disgrace that the woke warriors have killed him off.

Michelle: In the war? I didn’t know they actually did that.

Nadhim: No, I mean now. All this political correctness. I guess you can’t be in a GCSE anymore unless you are an ethnic minority or LBGQT or something.

Michelle: He was gay tho.

Michelle: For sure, bro.

Nadhim: Well, I never. You’ll be telling me Alan Turing was gay next.

Nadhim: No, he was science.

Narrator: Meanwhile Boris is hiding from the other islanders.

Boris: Blimey it’s hot in here, nearly as bad as Rwanda. People say I should go outside and answer questions and defend my actions. But that’s what Nadhim Zahawi is for. I think I’ll stay in here for a bit because I’ve made a real connection with someone who I’m always happy to see. I think President Zelenskyy feels the same but it’s hard to tell whether he just wants me for my big bazookas.

Narrator: Over in the kitchen, George and Ottoline are having a heart to heart.

George: I’m just not sure what to do.

Ottoline: But how do you feel about them?

George: I really want to be with them, but they keep putting barriers up.

Ottoline: What’s stopping you cracking on?

Ottoline: So, they are really into rules and that?

George: Yeah, like totes. They say, you behaved so badly in the past, how can we trust you now?

Ottoline: That’s so whack. Do you have a plan B?

George: Definitely, maybe I should just like write it off and crack on with plan B.

Ottoline: So, what is plan B?

Ottoline: Go on then, what is it?

George: Any day now, definitely going to do it, if they keep shutting me out.

Ottoline: I don’t think there is a plan B.

Ottoline: You should be.

Narrator: There’s always one player cracking on behind everyone else’s backs, and it’s always Michael.

Michael: Most people have come in here to couple up, but all I’ve been able to do is level up. I’m beginning to think it might have been a mistake to cancel the HS2 route to Wakefield. It looks like we’ve really been mugged off there. But you know, you’ve just got to go with your feelings. That’s why I’m thinking of trying again. But after the vote of confidence how can you trigger a leadership contest?

Narrator: Meanwhile, Boris and Carrie are having an argument by the pool.

Boris: All I said was, I’d like to get to know them better.

Carrie: And what about me?

Boris: I’m sure they would have a job for you too.

Carrie: Your head has been turned.

Boris: To be honest, if my head could turn any more, I’d be an owl.

Boris: Someone has to have my back in here.

Boris: Bozza needs to crack on with a lot of people.

Carrie: But what about me and little Wilfred?

Boris: Have you been reading the GCSE curriculum as well?

[A ping is heard]

Michelle: I’ve got a text.

[All the islanders gather around the fire pit]

Kwasi: What does it say?

Michelle: Welcome to Spain. Due to roaming charges for non-EU citizens you will be charged at £5.99 per message #AnotherBrexitBenefit #Don’tTellJacob

[Another ping is heard]

Ottoline: Read it out.

Rishi: Your flight to London Gatwick has been cancelled. You can rebook via our online portal between 23.00 and 23.15 on the second Friday of any month ending in a Y #CoalitionOfChaos #Don’tBlameGrantShapps.

[Another ping is heard]

Mick: I’ve got a text. It says, “The public have voted. They would like Mick to leave the villa and return home to run the country. The rest of you can stay here for the rest of the summer, don’t even think of trying to use a small dingy to get back. #TheParty’sOver #BluePassports”.

Boris: Ah well, if we are going to be locked in here, let’s do what we always do. Where’s Sue Gray’s Karaoke machine?

Terms of use: this is a free email for fun on a Friday, it should be shared among colleagues like a resignation letter from a party chairman. Want to vote for your least favourite Gove islander? Want to say hello? Email ivorytower@researchresearch.com