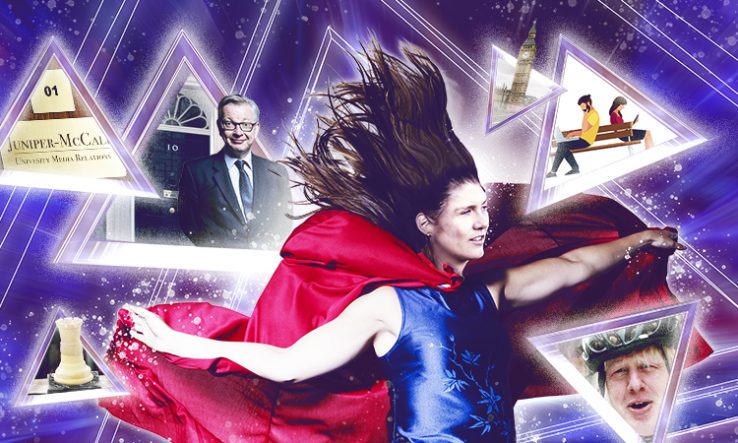 Ivory Tower: a final adventure for the 35-hour education secretary

The office of World Wrestling Entertainment; evening is falling.

Michelle: I won’t, just got to finish these character profiles for next week’s programme.

Candy: If you are sure, Mickey. See you tomorrow.

Michelle is left on her own in the half-dark, typing away. She hears a noise.

Michelle: Candy, is that you? I said just to go.

Figure in the dark: Michelle Donelan?

Michelle: Yes, who wants to know? You’re not from immigration, are you? I told HR my visa runs for 12 months.

Figure: We don’t have much time, so let me be brief. My name is Alexander Juniper. You may have heard of Juniper-McCall University Media Relations?

Juniper: It’s that universe, how disappointing. No matter, we need your help, Michelle, to stop a great force for wrong.

Michelle: Are you one of the wrestlers? You’ll need to wait until Candy and Dave come back in the morning, they deal with the talent.

Juniper: I am from another universe where we face an overwhelming threat. Only you can stop it by the decisions that you make.

Michelle: Other universe? You mean like Channel 5’s WrestleMania?

Juniper: Honestly, do you not know how multiverse stories work? Explain to her, Oliver.

McCall: To be honest, I’m not so clear myself.

Michelle: How long have you been there?

Juniper: Michelle, allow me to introduce the other senior partner at Juniper-McCall University Media Relations, Oliver McCall. In another universe, we run a secret culture-wars account for you at the Department for Education.

Janet: Could you two hurry up? I don’t think I can hold this portal to another universe open much longer.

Michelle: There’s three of you?

Juniper: This is Janet, our degree apprentice, at least in our universe. There are other ones in which she is president of the united planets.

Janet: Grab her and come on.

McCall holds onto Michelle and the four disappear in a zap of light.

A broom cupboard in the Department for Education.

The four travellers are squashed between shelves of paint and cleaning instruments.

Janet: It’s not as easy as it looks. Did you remember to change the batteries on the verse hopper?

Michelle: What on Earth is going on?

Juniper: You are now in an alternative universe. One in which you are the minister for further and higher education at Westminster.

Michelle: I can live with that.

Janet: I told you so.

Michelle: Who is the prime minister?

Michelle: You did say it was an alternative universe, right?

Janet: Yes, every decision you make in your timeline branches off into an alternative reality. As you multiply decisions, the number of possible universes grows. We are from the one in which you really make a big mistake, and we need you to put it right before it is too late.

Juniper: At least one of us understands how multiverse stories work.

Michelle: And what if I refuse?

McCall: There is always the Australian department for immigration to talk to. That’s a doozy of a universe.

Michelle: So, what do I need to do?

Janet: There’s a catch. The verse hopper device can only be used five times; if you are not back in your own universe on the fifth jump, you will be stuck forever where you least want to be.

Michelle: Northwich? That’s not good. But why does the device only work five times?

McCall: In our universe, when the preferred candidates to run the Advanced Research and Invention Agency withdrew, they appointed Gavin Williamson as CEO and Matt Hancock as chair. The quality of invention hasn’t been up to much.

Juniper: All that money spent on battery research, and we are still using Duracell from Poundland.

Janet: We don’t have time for this. We need you to go into your office and undo your mistake.

McCall: Yes, in this universe you are the secretary of state for education.

Michelle: I thought you said I was further and higher education minister?

Juniper: We were as surprised as you are.

The door of the broom cupboard opens. Helen, spad to the further and higher education minister, enters and closes the door. It is dark so she cannot see anyone.

Helen: It’s busy in here today. Are we all hiding from our ministers?

Nods and not-quite-intelligible coughs and yeses of agreement.

Helen: I tell you, I can’t work another day for that woman. If it’s not low-quality carnival, it’s free-speech circus. Wouldn’t be so bad if she ever visited a university…

Michelle: Who are you talking about?

Helen: Yes, I know, we are all Michelle, we have to be supportive of female ministers, but honestly, she’s…

Michelle pulls at a light chord and illuminates the scene.

There is panic and Helen knocks the verse hopper device. The five of them are transported to a wrestling ring, where they are in the middle of a WWE battle royal. Janet is holding her own, but Juniper is trying to avoid the blows.

Helen: Oh God, this is Dominic Cummings’ doing, isn’t it?

Michelle: Where are we?

McCall: This is the alternative universe in which one day you have to stand in for Sonia the Backbreaker and go on to become WWE champion.

A female figure in a cloak and mask growls in front of Michelle. She rips the mask off to reveal her own face.

Helen: There’s two of them. I’ve died and gone to hell. Somewhere, I’ve had a fall and am lying at the bottom of a staircase lapsing into unconsciousness.

Juniper: Everyone hold hands and press the verse jump button.

There is a flash of light and the five of them are in the chamber of the House of Commons. Michelle is wearing a wrestling costume.

Janet: Either the batteries are really low, or we’ve got the wrong Michelle.

Helen: Why is Amanda Solloway speaking at the dispatch box to a crowded house?

Juniper: The one in which Amanda Solloway becomes PM—we’ve really been knocked off course. We should really change the batteries.

Helen: Why is Michael Gove sitting next to her?

Janet: No time, one last jump.

She presses the button, and they are all back in the broom cupboard.

Helen: I’m just going to walk away and pretend none of this every happened.

She opens the door to go.

Juniper: Same time as normal next week for the liaison committee, Helen?

Janet: Never mind the government, the universe is at stake. Minister, get into that office and sort this out.

Michelle is pushed out of the broom cupboard, wearing her wrestling costume. She staggers into Theresa Wellington, the minister for levelling up, students and universities.

Theresa: You look different, Michelle, have you done something with your hair? Anyway, Sir Malcolm Baxter, vice-chancellor of Royal Dalton University, is waiting for you in meeting room 1.

Theresa: I know, the North by Northwest Midlands Institute and Technical College, but everyone is a university these days.

Michelle: I’ve just got something to fix in my office first, will be right along.

She goes into her office and sees an open laptop on the desk. On it is her resignation letter as secretary of state. She sits down to read it.

Meanwhile, back in the broom cupboard.

Juniper: We did tell her what the mistake was, right?

In the secretary of state’s office, Michelle in the wrestling costume has finished reading the letter. Her finger hovers over the send button, undecided as to what to do. Enter the Michelle of this universe in a ministerial twin suit.

Minister Michelle: What on earth?

Wrestler Michelle: Not sure this was supposed to happen.

Minister Michelle: Are you my conscience?

Wrestler Michelle: No. But you are resigning.

Minister Michelle: With regret, but I haven’t sent it yet. I’ve been minister for less than two days. If I don’t resign, things could be different. Boris might change, he could be prime minister for a decade. He really might get Brexit done, eventually. But if I do, it could bring down the government.

Wrestler Michelle: Now, I know what I must do.

She presses send and the resignation later is sent. Juniper, McCall and Janet burst through the door, shouting “don’t do it”.

Minister Michelle: Ah, Juniper-McCall, is it time for the liaison committee already?

Wrestler Michelle: I’ve sent it. The resignation is flying, and it will put an end to the force for great wrong.

McCall: Boris Johnson? No, he was just a greedy clown.

Janet: I told you, she would mess up.

Wrestler Michelle: What do you mean?

She stands up and knocks the verse hopper device. There is a flash of light and the two Michelles, Janet, Juniper and McCall jump forward in time as they stand in the ruins of the DfE building.

Janet: Rather than undo the terrible mistake you made as minister, your other self has doubled down on it, crossing the streams and created an even worse outcome.

Wrestler Michelle: Than what?

She points to a torn election poster flapping in the wind.

McCall: Worse, world president Truss. I’m guessing this is the day after she nukes Putin.

Wrestler Michelle: What have I done?

Minister Michelle: Isn’t there anything we can do?

Janet: Does anyone have any spare batteries?

McCall: Used to be.

Juniper: The one where they filled the suitcase full of booze for Downing St parties?

Janet: Come on, let’s see if there are any double As in the ruins.

The five figures set out to cross the rubble to post-apocalypse Westminster. They hear a voice shout “Hasta la vista, baby!”

Minister Michelle: I’ve got a bad feeling about this…

Terms of use: this is a free email for fun on a Friday. It should be shared among friends like a tube of factor 50 on the hottest day ever recorded. Want to trademark your wrestler name? Want to say hello? Email ivorytower@researchresearch.com

We are now heading off on our summer break, have a good vacation/A-level fiasco day/summer stuck in the office/finally getting some work done. Ivory Tower will return