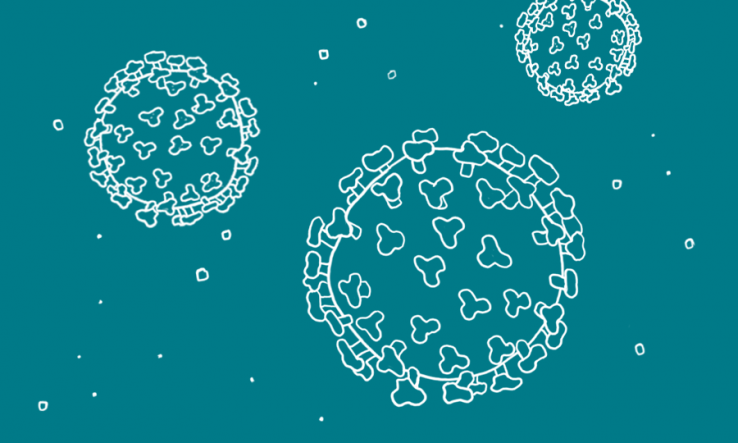 On 13 March 2020, the director general of the World Health Organization, Tedros Adhanom Ghebreyesus, warned that Europe had become “the epicentre” of the Covid-19 pandemic. Just over a week later, the UK plunged into lockdown, on 23 March.

One year on, Research Professional News looks back at the defining news stories of this turbulent time.

In chatrooms and at the family dining table, another topic makes the rounds. How can our European neighbours still waste precious time, hoping they can get away with the pandemic without having to adopt similar measures?

The crisis shows no signs of abating.

Universities quickly emerged as both centres of concern over disease spread and beacons of hope for R&D on cures and treatments.

The UK promised to make research one of four strands of its plan to combat the outbreak: contain, delay, research, mitigate.

Teaching shutdowns spread alongside Covid-19, with multiple countries banning face-to-face teaching in an effort to stem the coronavirus pandemic. 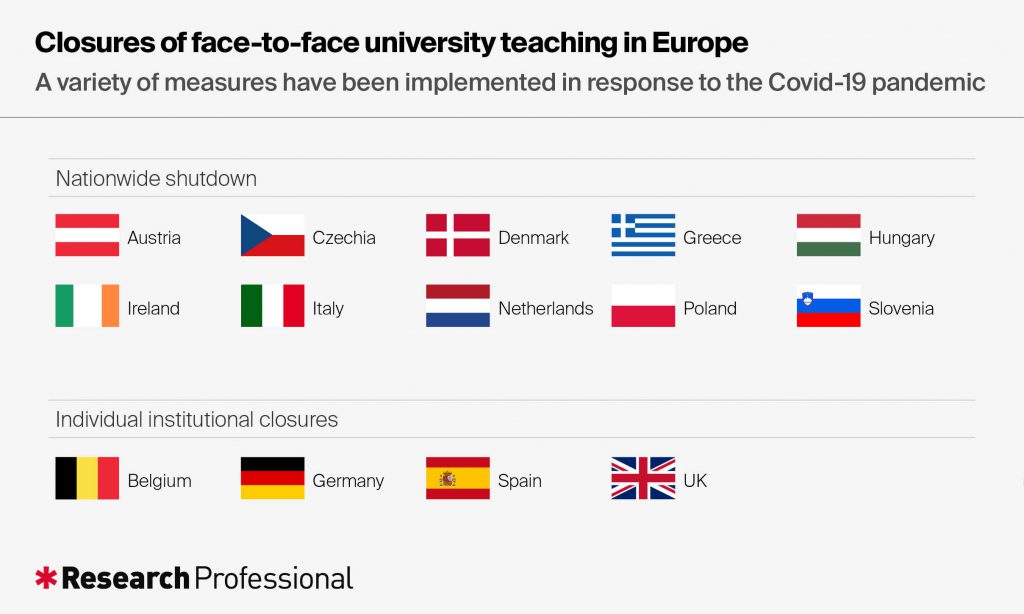 Researchers, innovators and academic support staff united to stem the spread of Covid-19 as, on 13 March, the WHO’s director-general declared that Europe had “become the epicentre” of the pandemic.

By April, Covid was also already shaking up the world of research funding, with the EU promising billions in funding for coronavirus responses. Calls grew for academic publishers to make all articles and data related to Covid-19 immediately available to everyone. Meanwhile, the president of the European Research Council resigned in a row at least partially over the governing board of the flagship funder rejecting his proposal for a “special programme” of Covid-19 ERC funding.

As of 27 April, there were already 119 vaccine candidates being developed around the world, by one estimate, with human trials underway in China, Germany, the US, Canada and the UK. But concerns had already been raised about ‘vaccine nationalism’ and the risk that the country producing the first successful vaccine could claim priority access.

Science advice solidified as a source of debate, with advisers in some countries receiving death threats as they were pushed into the limelight as never before, and in some cases taking the blame for unpopular lockdown decisions.

Specific vaccines began to become well known, too, with announcements including the University of Oxford’s partnership with pharmaceutical giant AstraZeneca on a vaccine aimed at preventing Covid-19 infection.

Universities throughout Europe began to reopen laboratories and classrooms after closures forced by the coronavirus, but many figures in research and higher education were warning that the worst of the storm had yet to hit. A report released by the European University Association suggested the crisis would have a long-term impact on many universities’ bottom lines.

In the US, the White House launched ‘Operation Warp Speed’, allocating almost $10 billion in federal funding to the scheme that aimed to have a vaccine ready for US citizens by January 2021.

Some researchers became increasingly vocal about a perceived lack of support from their funders in June, while huge amounts of money continued to pour into vaccine research and development.

Global vaccine alliance Gavi said it would be able to immunise 300 million children after world leaders promised $8.8bn to the initiative.

International travel restrictions increased, and on 22 June US president Donald Trump announced he was suspending all H-1B visas—which universities use to hire researchers for long-term positions—until the end of 2020. His presidential order said non-immigrant visa programmes posed an “unusual threat” to American workers during the pandemic.

In the UK, the government was offering to bail out universities hit by Covid cashflow problems, but concern was growing over the possibility of a second wave of virus cases.

Data collected by Policy Cures Research up to 17 June—and shown in the graph below—began to reveal how spending on Covid-19 was being spread around the research world. 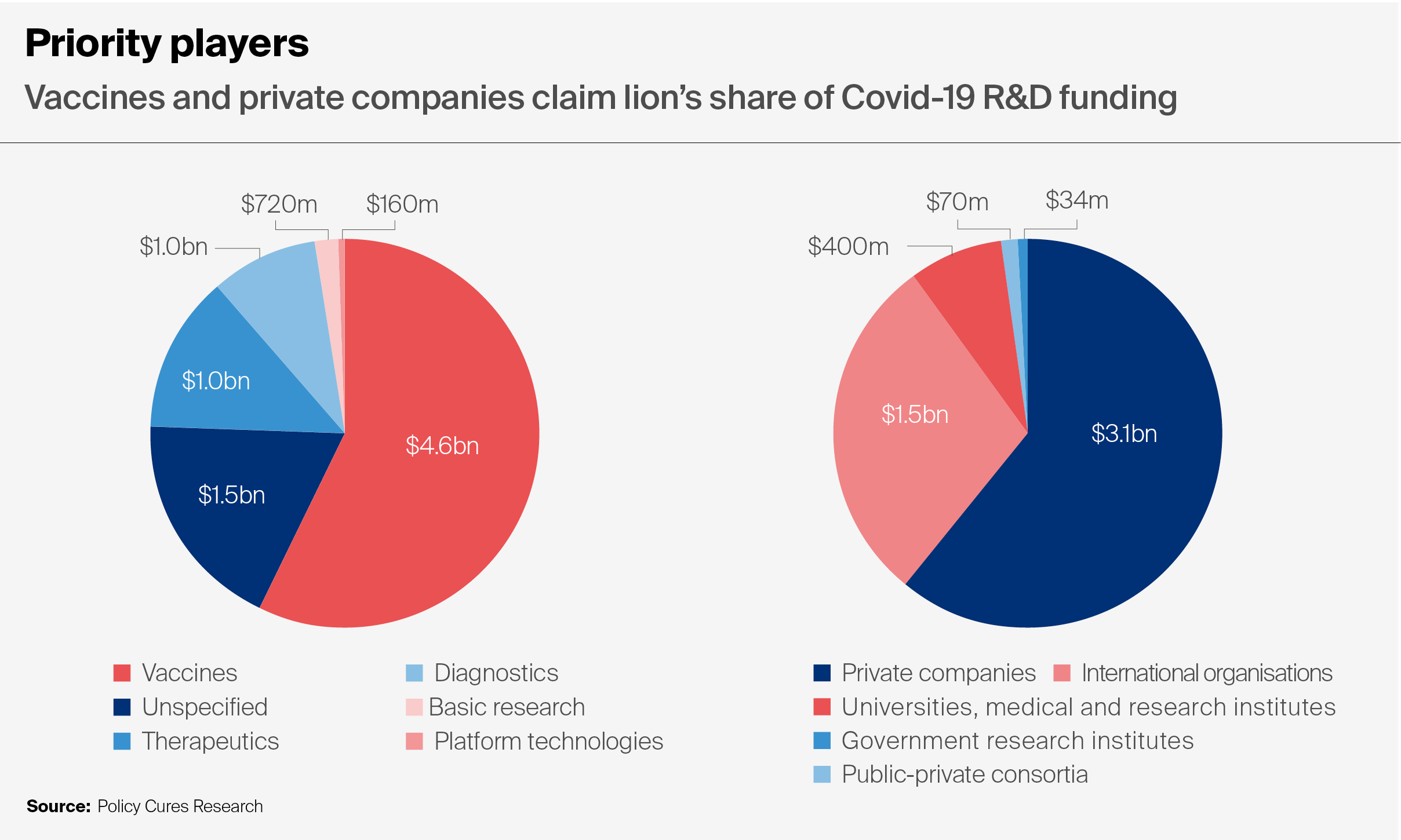 The push for openness in Covid research continued, with the European Commission asking organisations and individuals—in particular beneficiaries of EU grants—to make their results accessible and usable.

There was more international competition to secure promising vaccines, with the European Commission agreeing a deal for 200 million doses of a potential jab from Belgium’s Janssen.

The EU announced it was exploring how it could participate in an international effort to secure equitable global access to Covid-19 vaccines.

At the same time, efforts to pool national resources in the fight against Covid-19 were boosted by 64 higher-income countries signing agreements to take part in a global plan for equal access to vaccines against the coronavirus. The deals meant the Covax initiative—co-led by the WHO, Gavi and the Coalition for Epidemic Preparedness Innovations—covered nearly two-thirds of the world’s population.

As the summer holidays ended, universities across Europe opened their doors to students again for the new academic year, but with a second wave of Covid-19 sweeping the continent, institutions were already lining up more measures on top of those in place to combat its spread. And higher education institutions were being warned to look at a broad menu of income options to weather the “financial difficulties” they could face for years as a result of the pandemic.

As Europe responded to a surge in Covid-19 cases, universities had to navigate a rapidly changing environment, with many encouraging or requiring research and studies to take place online. 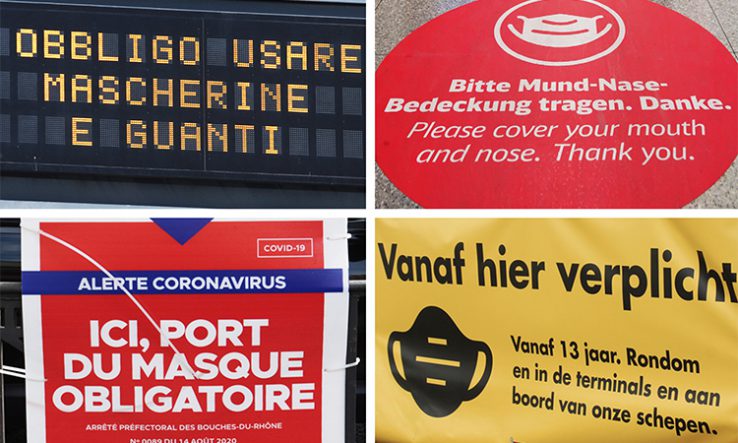 The European Commission was accused of abandoning researchers by not providing paid extensions to EU-funded R&D projects affected by the Covid-19 pandemic, which it said it was legally unable to do.

Scientists welcomed news of the UK becoming the first country to authorise use of a Covid-19 vaccine, but warned about challenges around logistics and public confidence. Shortly afterwards, a 90-year-old woman, Margaret Keenan, received the Pfizer/BioNTech vaccine against Covid-19 on 8 December. Authorisation for another vaccine, from the University of Oxford and AstraZeneca followed just before the end of the year.

The European Medicines Agency, the EU’s drug regulator, was forced to defend its slower approach to evaluating potential Covid-19 vaccines. Later, the EMA also approved the Covid-19 vaccine by the companies Pfizer and BioNTech for use in the EU.

Despite a positive vaccination campaign, UK prime minister Boris Johnson cast doubt on the continuation of exams that determine university entrance for hundreds of thousands of students, as he plunged England into the strictest national lockdown since March and told universities to shut their lecture theatres at the start of the year.

In the US, an association of research institutions estimated that the cost of the Covid-19 pandemic to research was reaching tens of billions of dollars.

The European Medicines Agency began the year by requesting more data from AstraZeneca regarding the safety and efficacy of its Covid-19 vaccine.

The AstraZeneca vaccine soon became subject to a political row over how many doses the UK was getting compared with the EU.

The European Commission granted an EU approval for the Covid-19 vaccine developed by AstraZeneca in February, amid the escalation of a row over the slow pace of vaccine deliveries in the bloc and the measures the Commission had taken in response.

Funding to research new variants of the virus grew, but so did concern that their presence will extend the pandemic and resulting lockdowns around Europe.