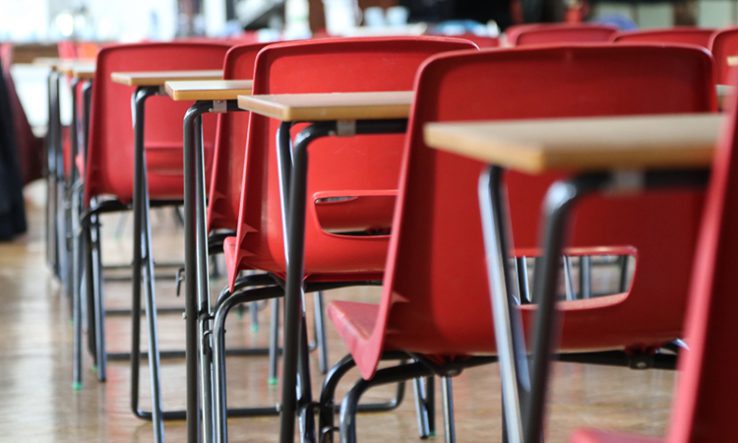 Almost 40 per cent of A level results have been downgraded, sparking fury among students and school leaders and overshadowing a year-on-year rise in the number of young people going to university.

In an analysis, Ofqual said not standardising teacher predictions “would undermine confidence in the grades awarded to students this summer” and would have pushed A* grades alone up from 7.7 per cent of grades in 2019 to 13.9 per cent this year. Overall, A level grades improved by 2.4 per cent in 2020.

Education secretary Gavin Williamson said: “The majority of young people will have received a calculated grade today that enables them to progress to the destination they deserve, with the added safety net of being able to appeal on the basis of their mock results, as well as the chance of sitting autumn exams, thanks to our triple-lock process to ensure confidence and fairness in the system.”

But Association of Colleges chief executive David Hughes said he was “deeply concerned that the adjustment process may have disadvantaged larger centres such as colleges” and wrote to Williamson to ask for “an urgent technical review into the A Level results standardisation process”.

Commenting on A level results, shadow education secretary Kate Green said the government’s approach to results had been “chaotic”. “Students must be able to lodge their own appeals if they haven’t got the grade they deserved and admissions teams must be forced to be more flexible. No student should see their dreams slip away because of this government’s inaction,” she added. Students cannot appeal results individually and must go through their schools to lodge appeals.

Students who want to appeal can ask to default to their mock exam results, or they can sit their A level exams in the autumn. However, students taking autumn exams are unlikely to be able to start university next term and the government has left it up to individual universities on whether to offer January start dates for courses.

Exams were cancelled this year due to the coronavirus pandemic. Instead, students relied on their teachers’ predictions, which were then centrally moderated. Ofqual confirmed its standardisation model was based on “the prior attainment of students in each [school or college]” and “the [school or college] performance in recent years”.

In Scotland, the government was forced to perform a “humiliating U-turn” and abandon its calculated grades after a quarter of Scottish Higher results were downgraded and moderation meant students from poorly performing schools were more likely to have their grades pushed down.

Universities minister Michelle Donelan has already warned vice-chancellors that students in England from schools with historic poor performance are likely to make up a sizeable proportion of those challenging their results.

Although Donelan has asked universities to show “flexibility” in admissions this year, there were reports on Twitter of students who had results downgraded having their university offers withdrawn. A spokesperson for admissions body Ucas told Research Professional News that if those students appealed their grades and were then awarded their original grades, universities would be expected to honour their offers.

But early data from Ucas revealed that more 18 year olds have a place on a course than this time last year, up to 30.2 per cent across the UK compared to 28.2 per cent last year despite a fall in the number of young people in the population.

A record number of young people from disadvantaged backgrounds—20,280— have been accepted on courses, up 7.4 per cent on results day last year.

Reaction to today’s A level results

“Receiving your results is always a huge moment, particularly this year after the disruption caused by coronavirus and the uncertainty that came with it, and I hope all students can take pride in their achievements.

“I know how difficult it was for students to find out that they were unable to sit an exam. It wasn’t a decision that was taken lightly. The majority of young people will have received a calculated grade today that enables them to progress to the destination they deserve, with the added safety net of being able to appeal on the basis of their mock results, as well as the chance of sitting autumn exams, thanks to our triple lock process to ensure confidence and fairness in the system.

“I want to congratulate all students, and thank parents, teachers and everyone involved in education for their contribution to making sure all of our young people are able to progress with the next stage of their lives.”

Michael Barber, chair of the Office for Students:

“Students receiving A level results today have faced unprecedented challenges and disruption—I congratulate them for their hard work over the course of their studies. Demand for university places remains strong. But there are also lots of places available through Clearing and universities have said they will show flexibility when making admissions decisions—this means using contextual information and judging a student by other evidence of their potential to succeed along with their grades.

“We are working with universities to ensure that they continue to make progress towards the goals agreed with the OfS through their access and participation plans, for which the decisions made this year about students from the most disadvantaged communities across the country will be crucial.

“For students making decisions about what and where to study in the days ahead, it is vital that they have access to good independent information and guidance. In addition, universities should set out as clearly as possible what prospective students can expect next term, particularly around how courses will be taught. Students can also compare courses on our Discover Uni website, which is specifically designed to give them the information they need to make the choices that are right for them.”

“Pupils should be congratulated for their hard work in unprecedented circumstances and deserve better than this mess. Ministers were warned this would happen, but pressed ahead anyway. The secretary of state making things up as he goes along is helping nobody. His last-minute triple lock brought another set of complications and likely appeals, and talking about delayed starts for some students now is just adding to the chaos and confusion.

“The government needs to accept it has got this badly wrong, stop trying to pull a rabbit out of the hat and keep things simple by using teacher predictions—as happened in Scotland. ‘If the government is now saying—after months of UCU calling for it—that we need to delay the start of term for some students, then it needs to provide a substantial funding package so that no jobs are lost and so universities can properly support students.”

“Students receiving their results today can be incredibly proud of their work and achievements in circumstances no one could have imagined. It is fantastic to see that in the face of these challenges, record numbers of 18 year olds have been accepted onto their university course—despite the dip in the 18-year-old population.

“It is particularly encouraging that more young people from disadvantaged backgrounds than ever have a confirmed university place, and welcome to see that recent events have inspired a wave of interest from the next generation of nursing students. In particularly uncertain economic times, the notable increase in places confirmed by mature students is testament to the important role universities can play in supporting the wider economy through reskilling and retraining.

“To those who may not have got quite the grades they hoped, our message is please do not panic. University teams are ready and waiting to support you and talk through the many opportunities still available for you in the days and weeks ahead.

“All students about to take this next step in their education can be confident that universities are ready to welcome them, with detailed plans in place to ensure they benefit from a safe, high-quality and positive experience this year, learning new skills and working towards a degree they can be proud of.”