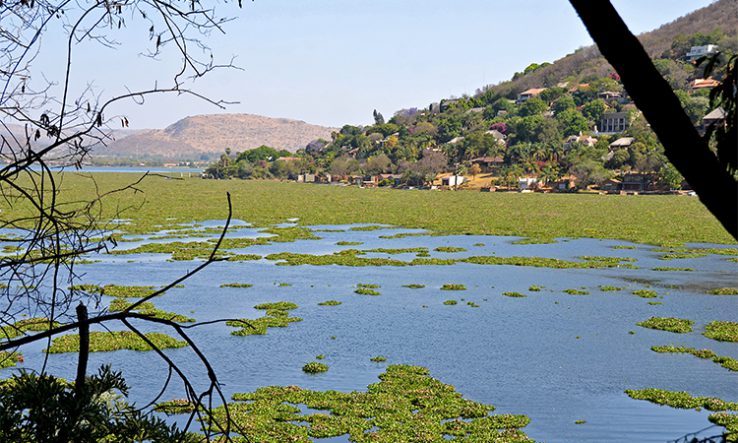 A failure of South Africa’s government to renew funding for projects that develop biological agents to control invasive plants threatens decades of progress in the field, scientists have warned.

Biological invasions by plants like the non-indigenous water hyacinth (pictured) cost South Africa approximately R2 billion (US$135 million) per year, scientists say. Biological control agents such as insects provide a solution to the problem, and can be used on a large scale.

However, the non-renewal of funding from the Department of Forestry, Fisheries and the Environment to a number of research institutions in the country threatens South Africa’s biological control efforts, biodiversity expert Brian van Wilgen wrote in an email to journalists on 4 October.

The DFFE has been funding research into the biological control of invasive alien plants for a couple of decades now, wrote van Wilgen, who heads Stellenbosch University’s Centre for Invasion Biology. He said the department had the money to continue funding this year, but failed to renew its contracts with key agencies.

Van Wilgen blamed “what appears to be bureaucratic red tape” for the non-renewal of contracts with the Centre for Biological Control at Rhodes University, the Plant Protection Research Institute at the Agricultural Research Council (ARC), and a project run by the South African Sugarcane Research Institute (SASRI) in Durban that rears biological control agents for mass use.

“Once this capacity is lost, it will simply be impossible to re-establish it,” van Wilgen warned.

Those contracts were initially meant to expire at the end of March, but the department extended the contracts “to allow the service providers time to meet their deliverables and exhaust all funds which were still available on the contract, which they did,” the spokesperson said.

With the contracts expired and all the funding obligations met, the department could not extend them further, the spokesperson said, adding that all three organisations have submitted bids for the department’s new funding cycle, for which the evaluation process is ongoing. The department did not say when this process would be completed.

However, any future funding from DFFE may come too late for the institutions involved. Van Wilgen’s note follows a 1 October email sent to colleagues by Des Conlong, a senior insect specialist at SASRI, announcing the closure of the institute’s mass rearing unit for biological control agents. He added that his own job contract has also not been renewed due to the lack of funding:

“It is really a pity that this operation has to close now in such a bad and unnecessary way,” Conlong wrote, urging anyone with ideas of funding sources for the work that the unit carries out to come forward. Staff from the unit have been moved to other SASRI projects to serve out their notice periods, he added.