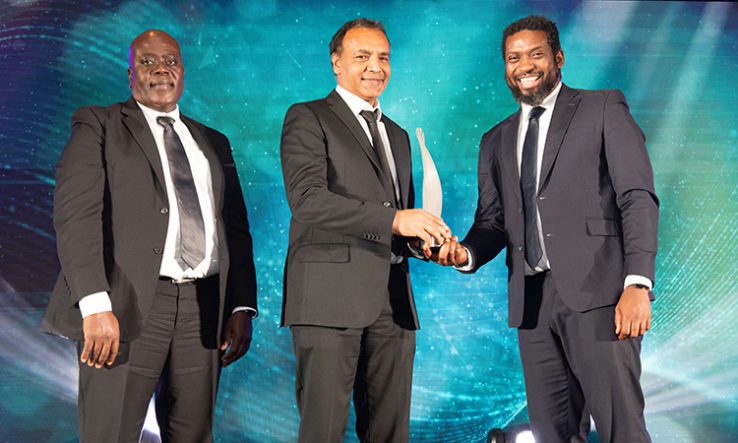 South African vaccinology professor Shabir Madhi has been given the National Science and Technology Forum’s lifetime award for his services to science.

The awards ceremony, held simultaneously in Cape Town and Johannesburg on 21 July, marked the 24th instalment of the prizes, for which winners receive a trophy and media exposure.

Madhi (pictured, middle), who is dean of health sciences at the University of the Witwatersrand, was recognised for his leadership in research on vaccines against life-threatening diseases in Africa and globally since 1997.

“This award is not just for me but for the collective effort of my team of 500 individuals,” he said.

Madhi also thanked the people of Soweto, one of South Africa’s biggest townships south of the City of Johannesburg, where he has conducted most of his research projects.

“If it were not for the willingness of people in Soweto to step forward and be part of this, we would not have a research project,” he said.

Marianne Vanderschuren, a civil engineer and professor of transport studies based at the University of Cape Town, received the Special Annual Theme Award for her role in improving the quality of life of vulnerable road users.

She holds a research chair in transport systems, a role in which she focuses on new technologies to alleviate South Africa’s transport woes, boost the economy and protect the environment.

Vanderschuren said she had dedicated 32 years of her life to making a success of her career.

The non-governmental organisation CodeMakers was also rewarded for its conception and implementation of SuperScientists, an initiative that caricatures living scientists by illustrating them as superheroes who educate and inspire the young people of SA.

The NSTF is the largest national non-profit stakeholder body for South Africa’s science, engineering, technology and innovation organisations in both the public and private sectors.