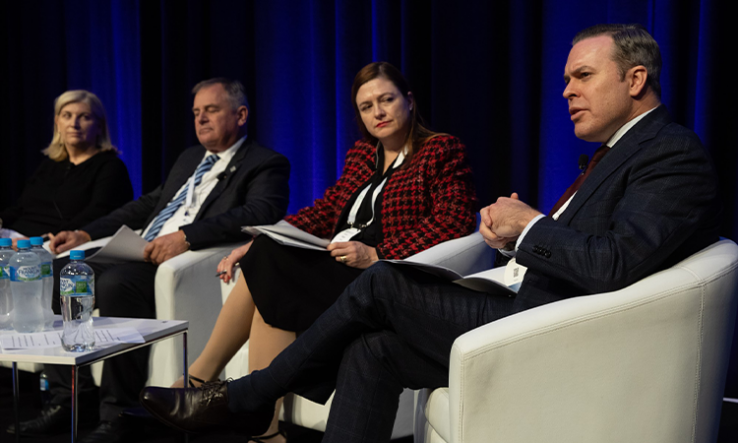 Australia’s universities have been told that better cooperation and compliance with existing security mechanisms is the path to avoiding further federal intervention.

At Universities Australia’s annual conference on 3 June, Patrick Hallinan, deputy counter foreign interference coordinator for the Department of Home Affairs, said there were “a number of countries” seeking to interfere in Australian research. This could take the form of cyberattacks, theft of intellectual property, preventing individuals from taking part and controlling people from “ethnically and linguistically diverse” backgrounds.

The interference targets both universities and public research agencies such as the Commonwealth Scientific and Industrial Research Organisation, he said.

“Nationals [of other countries] can be subject to forms of coercion which simply would not and could not happen in Australia.”

Speaking on the same panel (pictured), Tanya Monro, Australia’s chief defence scientist, said the priority was “being able to protect what needs to be protected…so it can produce sovereign advantage”.

“The environment in which we do science has changed quite substantially,” she said, adding that Australia needed to work more closely with “allies” and “like-minded countries”.

Alex Zelinsky, vice-chancellor of the University of Newcastle, said that the security environment had begun to change around 2010 and 2011 when, among other factors, the United States started to demand more care around sensitive materials from its partners. At the time, the Australian government response was not collaborative, he said, but the eventual formation of the University Foreign Interference Taskforce created a forum for cooperation.

However, Zelinsky slammed the 2020 laws on foreign interference and their requirement that universities must report all potentially sensitive arrangements to government. He said this would create a “truckload” of paperwork.

As a former chief defence scientist, Zelinsky said universities needed to “be serious about the University Foreign Interference Taskforce guidelines” if they wanted to avoid further legislation.

Bronwyn Harch, the University of Queensland’s deputy vice-chancellor for research and innovation, said that her institution had developed a set of disclosure rules including statements that researchers must complete every year. This includes research by higher degree students, and she said the university had declined a higher degree research project because of a student’s ties to “the military”, although she did not say of which country.

Responding to audience questions, she agreed that self-censorship by academics in response to national security concerns was occurring. Session chair John Dewar, vice-chancellor of La Trobe University, said there was “a risk that we hyper-comply and kill off a lot of activity”. Dewar was recently appointed chair of Universities Australia.

Hallinan said that the Department of Home Affairs needed to work with academics who best understood their areas of research and the potential risks, and that the University Foreign Interference Taskforce was a valuable vehicle for that.

“It’s a national-level risk that we are trying to deal with,” he said. “This is an increasingly complex area which spans multiple portfolios.”

Changes in security thinking are happening internationally, he added. “I expect when borders reopen…I don’t think it will be only Australians who will be talking about these issues.”

In another session at the conference, University of Oxford economics professor Ngaire Woods warned against shutting the doors to cooperation. She raised the example of a gene therapy that could save lives, asking if “that’s only going to be available in this world, not that world”.

“Australia can’t afford to be a fortress. Australia is a huge open trading economy,” she said, suggesting that the country needed a plan for funding research to replace the “startling” level of reliance on Chinese students and Chinese research funding.

In his address to the conference, Arthur Sinodinos, Australia’s ambassador to the United States, said there was “a bipartisan commitment to addressing foreign interference and the theft of intellectual property”. America “is also watching very closely how we address issues like foreign interference in Australia”, he said.

“This is not an issue that’s going to go away. It does present challenges because we think of science and technology as being at its best when it’s open source.”