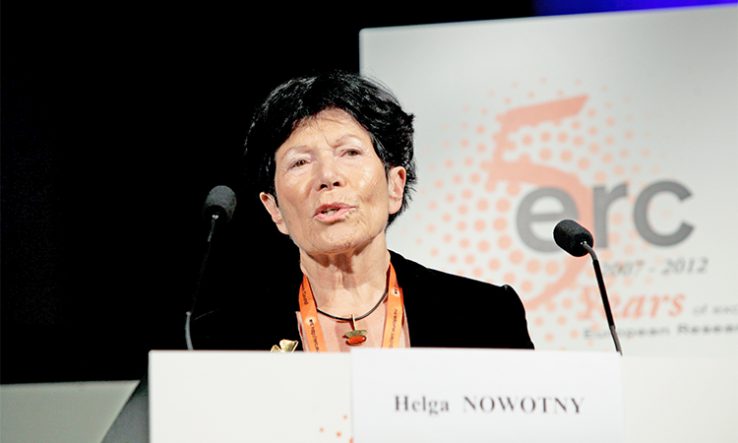 A former European Research Council president, Helga Nowotny, has been selected to chair the independent search committee tasked with identifying the next president of the EU’s flagship funder of fundamental research.

The European Commission announced the seven-member committee on 9 October. It also includes Pearl Dykstra, the deputy chair of the Commission’s high-level group of chief scientific advisors.

“I have faith that this committee of high-level scientists will provide us with a well-considered shortlist of the very best candidates for this prominent role,” said EU R&D commissioner Mariya Gabriel.

The search committee will make recommendations to the Commission on the best candidates for the four-year post, which is currently held by interim president Jean-Pierre Bourguignon.

Bourguignon, a two-term former ERC president who returned to lead the funder following the shock departure after just over three months of Mauro Ferrari in April, said that he hoped the search process being opened up for nominations would “help find an excellent future ERC leader”. Nominations were not accepted when Ferrari was appointed.

Nowotny was a member of the search committee that recommended Ferrari to the Commission. In an interview with Research Professional News in September, she criticised that selection process for not involving the ERC’s governing Scientific Council.

She said then “it is important that rules of the game will be changed”, adding that the search committee should at least have an observer from the Scientific Council, if not a voting committee member.

The Commission appears to have listened and gone one further: the new search committee includes Fabio Zwirner, who is a vice-president of the ERC and a member of its Scientific Council.

The other search committee members are: Tamás Freund, of the Hungarian Academy of Sciences; Jiří Friml, from the Institute of Science and Technology, Austria; Serge Haroche, of the Collège de France; and Viola Vogel, of ETH Zürich.

The deadline for nominations and applications is 20 November. The Commission expects a candidate to be appointed by the end of the first quarter of 2021.