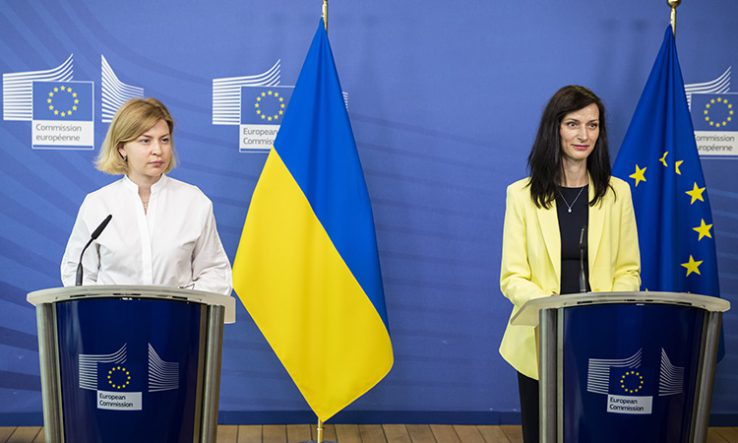 The EU has launched a new scheme to support Ukrainian innovators and is waiving the cost of Ukraine’s participation in the bloc’s R&D programme, in an effort to help the country’s research and innovation ecosystem survive and rebuild after the Russian invasion.

At a press conference announcing the scheme on 9 June, Ukraine’s deputy prime minister for European and Euro-Atlantic integration, Olha Stefanishyna, said that Russia has so far destroyed about 15 per cent of Ukraine’s research infrastructure since its military bombardment began in February.

“Millions of Ukrainians have lost not only their homes, many of them lost their lives, but also they lost the access to education and research means, access to the labour market,” Stefanishyna (pictured above left) said.

“Since the beginning of this full-scale war, around 15 per cent of the research infrastructure, the higher educational research institutions of Ukraine were destroyed and stopped existing.”

Stefanishyna said that Ukraine had been unable to access and assess the potential damage caused to some R&D infrastructure “occupied by the Russian army [including] unique scientific equipment, facilities [and] research laboratories”.

At the press conference, the EU R&D commissioner Mariya Gabriel (pictured above right) said: “For Ukraine, participation in these programmes will be free of any financial contribution for at least years 2021 and 2022,”, adding that this support was worth about €20 million.

The main purpose of the press conference was to announce the launch of a new scheme to support Ukrainian innovators, also worth €20m, under the EU’s European Innovation Council funder, which funds the growth of R&D-based “deep-tech” companies or business ideas.

The scheme will give at least 200 Ukrainian deep-tech startups €60,000 each to help them survive the invasion and rebuild Ukraine’s economy after the war. The funding will be distributed through a competitive call that will open on 23 June and close on 7 September.

In addition, the EIC will offer non-financial support to the startups, such as business advice and matchmaking, which is intended to help embed the companies into the European business ecosystem.

“We are doing our best to mobilise all possible resources and provide support that can help Ukraine in these difficult times,” Gabriel said, calling on European innovation actors to join the Commission in providing help.

“Ukraine has a vibrant deep-tech community, and strong potential for creating breakthrough innovations…It is paramount to preserve this potential and nourish it so that the Ukrainian tech industry can become a key economic driver for rebuilding the Ukrainian economy and infrastructure after the war.”

‘Russia can be stopped’

Stefanishyna emphasised that the scheme was “specially addressed to the companies working to innovate solutions, services and products for rebuilding and recovery efforts”.

She said that more than 70 per cent of Ukrainian startups are still operating, despite Russia “attacking by air bombings the elements of industry” in Ukraine.

“They are ready to work and develop, but most projects…need additional funding to survive,” she said.

Asked how far Putin might go with the war, Stefanishyna replied: “Russia, and the Kremlin, and Putin in particular, would go as far as he will be allowed.” But she added: “Russia can be stopped.”