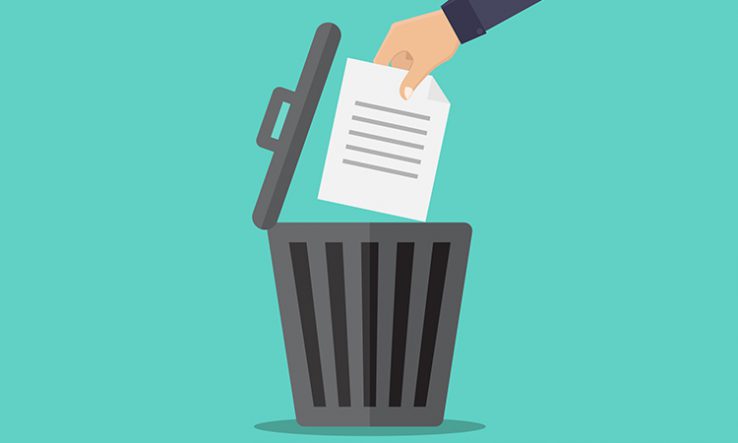 Experiences from the pandemic show the most flawed papers should be deleted, says Piotr Rzymski

Retraction, by authors or journal editors, is the strongest measure that can be taken against a scholarly paper found to contain grave errors or misconduct. In such cases, the title is modified accordingly and retraction watermarks are added to the PDF file and website version of the article. Editors publish a separate but associated retraction note explaining the reasons.

However, while they are officially withdrawn from the record, such papers remain accessible via the journal’s webpage and databases, in line with guidelines from the Committee on Publication Ethics (Cope). There is growing evidence that these papers continue to influence public opinion, appear in media reports and even mislead scientists.

Last summer, for example, German psychologist Harald Walach and his colleagues published two papers in reputable, peer-reviewed journals. One claimed that vaccines killed two people for every three they saved; the other said that wearing masks exposed children to higher carbon dioxide concentrations.

Both were heavily criticised for invalid methodology and swiftly retracted. Despite this, by the end of January the vaccines study had been viewed more than 650,000 times and the masks paper nearly one million times.

These are numbers worthy of groundbreaking science, not papers with significant flaws. Both articles are enthusiastically shared by anti-vaccine campaigners and Covid conspiracists, and risk contributing to vaccine hesitancy and lower adherence to protective measures. Nor are they lone examples: by the end of 2021, more than 200 papers related to Covid had been retracted.

Retracted papers can go on spreading their malign influence for decades. Andrew Wakefield’s discredited 1998 paper in The Lancet, associating the measles, mumps and rubella vaccine with autism, remains fully accessible and widely shared on social media. Unsurprisingly, fear of autism remains a common concern of parents vaccinating their children.

Retractions can even go unnoticed by academics, being cited without appropriate acknowledgment and included in meta-analyses, which play a pivotal role in evidence-based medicine. One paper on the effects of food supplements on chronic obstructive pulmonary disease, retracted in 2008 after it was found to contain fraudulent data, was cited over 100 times in the next 11 years, including in nutritional recommendations. More than 90 per cent of citations fail to acknowledge the retraction.

If researchers do not notice a retraction, it is even less likely that journalists will—particularly during crises, when there is a flood of research to keep up with. This could have serious repercussions in shaping public views on social, political and health issues.

For articles addressing critical issues such as public health, classical retraction is no longer fit for purpose. It worked when the scientific literature was dominated by printed, peer-reviewed journals and read nearly exclusively by scientists. But today, scientific papers are predominantly published online and can be accessed globally by the general public.

With non-academics mostly unfamiliar with the procedures of scientific publishing, having retracted papers on full display might have severe consequences for clinical practice and patients’ health. It also risks undermining public trust in science.

Science needs a stricter approach. In a recent paper, I put forward the idea of ‘hard retraction’, where highly defective works, whether fraudulent or incompetent, are deleted, leaving only the authors’ names and affiliations and a detailed retraction note. The paper should be deleted from databases and open repositories, making it no longer searchable. It should be confined to a dedicated repository accessible only to journal editors and members of the scientific community on reasonable request.

Hard retraction would make the most flawed science less accessible and represent a more severe sanction for questionable practices. It is, though, not without costs and risks. It would need to be accepted by academics. It would require substantial revision of the Cope guidelines. It would raise concerns about censorship, and about who decides between hard and regular retraction. And even if they disappeared from legitimate venues, papers would still be shared in dark corners of the internet.

Even so, the benefits are likely to outweigh the risks. The pandemic has shown that scientific publishing needs a better way to minimise the damage of flawed papers to both academia and the public. If hard retraction proves beneficial in health and medical research, it may also be worth extending the approach to fields such as climate change.