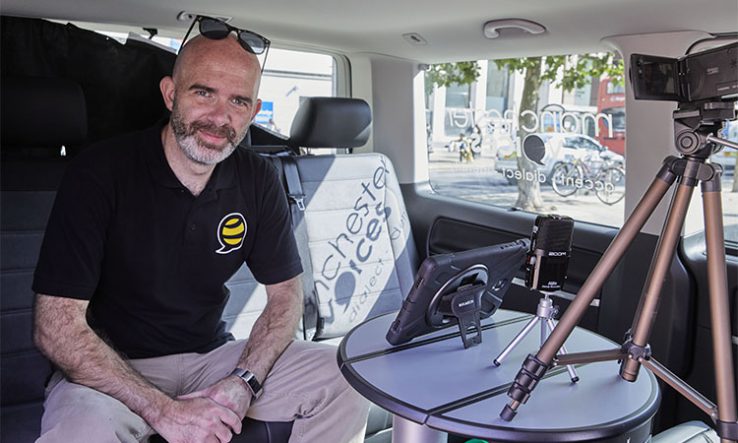 Finding the sweet spot between field research, co-creation and impact

Funders often advise applicants that impact activities should be integral to their proposed projects. Co-creation of research with subjects is also a growing concern. Rob Drummond, a reader in sociolinguistics at Manchester Metropolitan University, found a way to meld both with field-based research for his Manchester Voices project, which was funded by the Arts and Humanities Research Council standard research grants scheme.

The scheme is open year-round and supports collaborative projects that cost between £50,000 and £1 million. Early career research grants for smaller projects, with funding of up to £250,000, are also available via the scheme.

Describe your Manchester Voices project in a nutshell.

It’s a sociolinguistic project looking at the accents, dialects and identities of people in Greater Manchester. The project has several different strands—including looking at the way people speak and what people think about the way they and other people speak across the 10 boroughs. As part of the project, we bought a specially kitted-out vehicle, which we called the Accent Van. It served as a mobile interview booth and recording studio.

What kind of activities have come out of the project?

We were always going to produce academic articles but for us, the most important thing was the public-facing element of the project. We created an installation at Manchester Central Library, including a touchscreen where people can explore different aspects of the project—recordings, maps, poems and podcasts. We’re also creating an online version.

Why apply to the AHRC rather than the Economic and Social Research Council?

Linguistics does sit across both councils’ remits, so there’s always a decision about where to go. We chose the AHRC because we wanted to emphasise the heritage aspect of our project. It wasn’t a straightforward sociolinguistics project looking at how people speak; it was much more of a community-oriented, heritage-focused initiative and we felt the AHRC had more of a background in this area.

How did you find the application process?

The whole thing was challenging. I would work on the bid for a few weeks, then hand it over to my colleague and co-applicant Erin Carrie and we would bounce ideas off each other. This made it a lot easier because we weren’t working on the application intensely at the same time.

It helped that I was already a member of the AHRC peer review college, because I saw what good practice looks like and when things don’t work as well. Reviewing other people’s grants is by far the best way to learn how to write grants. It’s always important to remember that your bid will get reviewed by those who might be unfamiliar with your area of research. Take a step back and think: “Would someone else reading this know what I’m trying to do?”

Your project involves partnerships—do you have any advice in that regard?

Talk to as many people as possible, because there are lots of organisations keen to get involved in research. They almost never have money, but they have other things that can be useful. For example, they might have a physical space you can use, or perhaps their name might open doors. Our partner Manchester Central Library were pleased to have the installation in their library—their only investment was space, time and contacts.

What do you think made your project stand out to the AHRC?

I think it was its innovative nature. Every time we spoke about the Accent Van to other academics and linguists, they were quite envious. It worked extremely well as a way of getting research out to the community, rather than relying on people to come into the university or arranging to meet people in certain places. We went to music festivals, charity events, parks, town centres, libraries and mosques. As a result, we were able to speak to lots of people we wouldn’t normally speak to.

Now that your project is coming to a close, what would you do differently?

The one thing I wish I’d done differently is hire our postdoctoral researchers for longer. They were fantastic, the absolute core of the project. With grants, once you’ve got the money, you wish you’d asked for more. But when you’re applying, you don’t want to ask for too much. Despite the Covid-19 pandemic, I would say everything else has gone brilliantly.

What are you planning to do after this project?

I’ve got lots of data, which I could keep analysing for years and years to come. The project was quite innovative in terms of how we designed the research, and I’ve thought about conducting a similar project in another area of the country, or looking at another country completely.