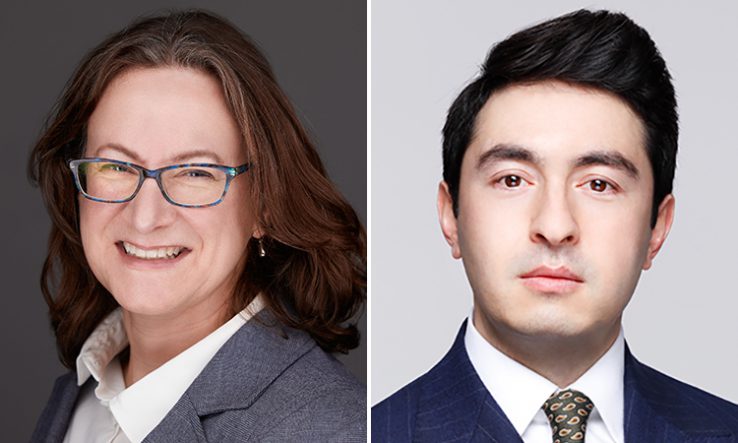 A Dutch advocate for research integrity and a UK clinician who spoke out against a government report on ethnic disparities have been recognised for “standing up for science” in the face of adversity.

At a ceremony on 1 December, Elisabeth Bik (pictured, left), a microbiologist and scientific-integrity consultant from the Netherlands, was awarded the 2021 John Maddox Prize in recognition of her work exposing image manipulation, plagiarism, data manipulation and methodological concerns in nearly 5,000 scientific papers.

An additional prize—for an early career researcher who stands up for science—was awarded to Mohammad Sharif Razai (pictured, right), an academic clinical fellow in primary care and a general practitioner at the University of London, for “bringing an evidence-based understanding of racial health inequalities to bear in public and policy debates”.

Now in its 10th year, the John Maddox Prize is given annually by the charity Sense About Science and the journal Nature to scientists deemed to have both defended and explained science.

“Maddox Prize winners are marked out by their refusal to turn away when the going gets tough,” said Sense About Science director Tracey Brown.

“It takes a lot of effort and commitment to guide the public through complex or uncomfortable findings. We must be grateful that this year, amid ever-growing pressures on researchers to keep their heads down, we are able once again to celebrate people who step up to that task.”

According to Sense About Science, Bik has faced “intimidation, online harassment, threats of violence and legal action” in the course of her work—most recently after raising concerns about research claims regarding a now-discredited treatment for Covid-19.

“But she has persevered, and inspired and encouraged a generation of early career researchers to follow in her footsteps in spotting and reporting fraudulent data,” the charity said.

Her efforts led to retractions and corrections of published work, and inspired the creation of industry standards to establish mechanisms for journals to screen images in submitted papers.

“Science builds upon science, and science publications that contain errors or even fraudulent data should be discussed, corrected or even retracted,” Bik commented. “Unfortunately, as I have experienced in the past years, being critical about scientific papers can lead to online harassment, doxing, and threats of lawsuits and jail time.”

Razai, meanwhile, has received hate mail, intimidation and harassment as a result of his work looking at vaccine hesitancy and the impact of structural racism on health disparities in ethnic groups.

On 31 March, the clinician took aim at the government’s report on race and ethnic disparities, which he described in the British Medical Journal as a “missed opportunity” that would lead to a “worsening of systemic inequalities”.

Razai described the award as “the biggest highlight of my career so far”.

“My work on racial health inequalities brought me in the crosshairs of those who thought that they could sacrifice scientific evidence in the service of a short-term political project,” he said.

Razai added: “I believe no matter what obstacles and challenges we may face as scientists in the global north, it is not the same as Afghan scientists, especially women and those from racial minorities, who literally pay with their lives in speaking truth and standing up for their rights. I remember them and dedicate this prize to them.”