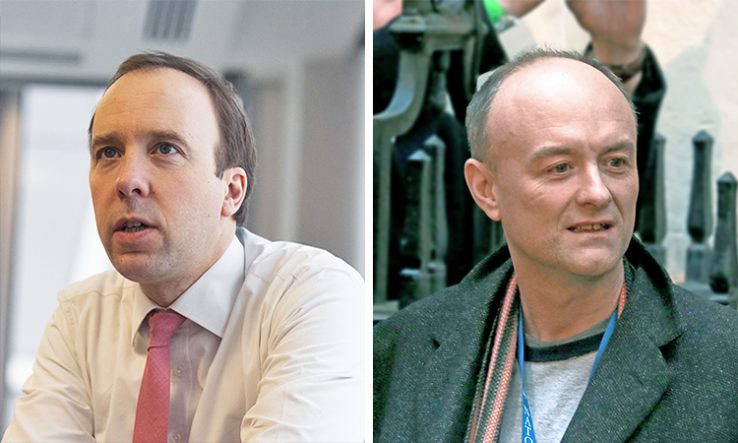 Sage “got it wrong” select committee hears, as it questions health secretary on Covid-19 advice

The UK’s health secretary has said he “bitterly regrets” not overruling some of the early science advice during the Covid-19 pandemic.

Addressing the House of Commons Science and Technology Select Committee on 10 June, Matt Hancock (pictured, left) said the “clear scientific advice” at the time was that “there was only a limited period that people would put up with lockdown” which he acknowledged later “proved to be wrong”.

Hancock’s evidence follows heavy criticism of his work raised to the same committee a couple of weeks ago by Dominic Cummings (pictured, right), former chief aide to the prime minister Boris Johnson.

Hancock rejected most of that criticism, noting that Cummings had not provided the committee with written evidence to back up his claims and that “the government has operated better over the past six months” since Cummings left Number 10.

The committee’s chair agreed that the government’s Scientific Advisory Group for Emergencies, which advised the government on its response to the pandemic, “got it wrong” on several counts early on, including on how long people would tolerate restrictions and the level of infection that could be contained within the NHS.

He added that “members of Sage are candid enough…to concede that”.

However, Clark questioned whether the government had appropriately challenged the scientific consensus and advice it was getting, which could have contributed to a slow response and delays to lockdown.

Hancock insisted that the government “absolutely debated and challenged” the scientific advice. For example, he said in January 2020 he had disputed advice that a flight ban should be restricted only to Wuhan.

But he added that “overruling a scientific consensus is much harder—especially when the costs of the lockdown are immediate and obvious”.

For example, Hancock said he had been aware anecdotally of asymptomatic transmission of the virus but that there was a “global scientific basis based on decades of expert work on coronaviruses that coronaviruses do not transmit from people who do not have symptoms”, a stance he said was backed up by the World Health Organisation at the time. This was later proved to be wrong.

“I bitterly regret that I didn’t overrule that scientific advice at the start and say we should proceed on the basis that there is asymptomatic transmission until we know that there isn’t rather than the other way around,” the minister told MPs.

Reflecting on the UK’s successes during the pandemic, Hancock said the NHS’s response was “very strong”, with new hospitals being built and care delivered “to everybody who needed it”.

He also said the science response “was very strong”, adding, “we have a centuries-long science tradition”.

However, he acknowledged that “we didn’t have a major diagnostics industry or capability and the tracing and isolation system was essentially built for very important but very small outbreaks”.

“The lack of that capability at the start meant the options that we had were fewer,” Hancock said.

He also criticised the flow of data during the pandemic, which he said had been “strengthened enormously in the last 18 months”.

“It’s been improved no end but, by God, it was a problem at the start,” he said. “It absolutely was.”

Hancock’s comments angered some of the government’s science advisers and other experts.

Stephen Reicher, professor of social psychology at the University of St Andrews, and a member of Sage’s SPI-B sub-group on behavioural science, said: “Hancock claims that earlier lockdown would have gone against the scientific consensus and that ‘the clear advice at the time was that there was a limited time…that people would put up with it’. This is quite simply untrue.

“It is an old claim that has been comprehensively debunked. Such advice didn’t come from the government’s own behavioural advisory group. Such an idea was publicly disputed by behavioural scientists.”

This was echoed by John Drury, professor of social psychology at the University of Sussex, another member of SPI-B, who said Hancock was trying to “re-write” history.

“There was not a ‘consensus’ among scientists that the public would not ‘put up with’ the restrictions,” he said. “The restrictions we were asked about in this briefing document were to do with reducing social contacts—ie, physical distancing—not ‘lockdown’.

“At the time, unnamed experts said that people would get bored and that measures might be unsustainable,” Drury said. “But you will not find reference to this in any of the documents produced for the government by SPI-B.”

Meanwhile, Martin Hibberd, professor of emerging infectious disease at the London School of Hygiene and Tropical Medicine, said: “Early on in the outbreak, most of the information was coming from China, and at this stage I think it is fair to say that there were a lot of unknowns.

“I think we should be clear that in April the political decisions were being made based on pragmatic availability of resources and a perceived ranking of importance, rather than on science advice alone.”