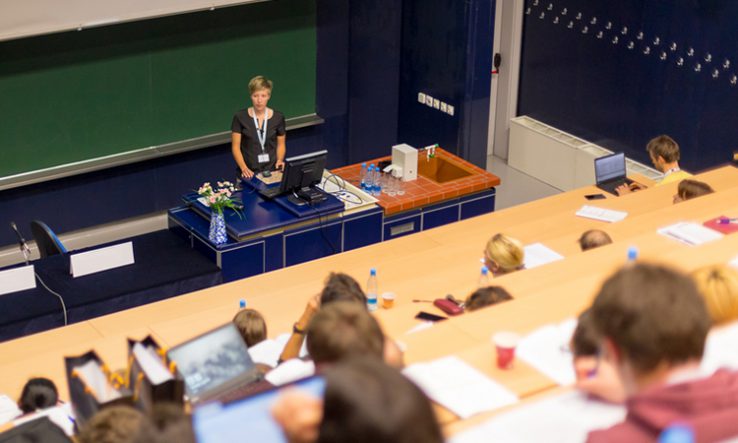 As the OfS updates its engagement priorities, Harriet Swain speaks to its student panel representative

Once Nicola Dandridge steps down as chief executive of the Office for Students in April, each of the four highest-profile roles on the OfS board will have had a new occupant in the past year—except one.

John Blake replaced Chris Millward as director for fair access and participation in January, and Conservative peer James Wharton took over from Michael Barber as chair in April 2021. But Martha Longdon, who has represented the student panel on the board since December 2018—the year the OfS was founded—remains.

Her term of office was extended in October 2021 and will run until the end of December 2022. “There were some things I really wanted to do and to wrap up in my time here,” she says.

When the regulator was set up, it was criticised for having just one student on its board—and it only had that after an amendment to the Higher Education and Research Act 2017 stipulated the appointment of a board member with experience of representing or promoting the interests of students.

Today, the OfS publishes updated student engagement priorities for 2022 to 2025, with a promise to “embed student engagement” within its strategy. The importance of the student panel—described as “an effective and strategic student voice at the heart of the OfS”—features prominently.

Longdon, who is studying for a PhD in biosciences at Nottingham Trent University, is currently the only student on the 14-strong OfS board.

Initially unhappy as an undergraduate, which she puts down to an overhasty decision about what to study and where to study it, Longdon withdrew from her course and successfully applied to a different university—the University of West London—as a commuter student, studying psychology.

While she did well in her degree, she felt that living at home meant she missed out on student life. On returning to do a master’s degree at Nottingham Trent in 2016, she decided to make up for it by throwing herself into every activity she could. She became a course rep, which she loved. “I sort of saw some gaps where I thought maybe we could do better as a university,” she says.

This led her to the presidency of the student union around the time that the Higher Education and Research Act was becoming law, meaning she was forced to spend time looking at the implications of the regulatory framework and thinking about how the OfS would change students’ experiences.

“I just thought it could be the kind of thing that could really make a difference for students, and I really wanted to be part of it,” she says.

According to the notice of her appointment to the board by the Department for Education, Longdon “has a lead responsibility for ensuring that the OfS board oversees the embedding of student engagement within the culture and structure of the organisation”.

But Longdon is also there in her role as chair of the student panel, a 16-strong group ranging from A-level to mature students and from university applicants to student union sabbatical officers.

Dandridge promoted the idea of the panel and regularly argued that protecting students was the OfS’s chief remit. But there were concerns that the students were there more to tick a box than to have a meaningful impact on an organisation that was already struggling to triangulate between the demands of higher education institutions and government.

The National Union of Students was particularly annoyed that it would have no formal representation on the OfS board, although Shakira Martin, president of the NUS at the time, was included on the first student panel, along with former NUS president Megan Dunn. NUS representation on the panel has varied since, but there is no automatic place for the president.

An early member of the panel, who considers the lack of a formal NUS role to be a mistake, says it derives from a determination to engage with “ordinary” students who are not normally listened to.

But he suggests that early panels lacked focus, with students expected to tell the OfS what they wanted it to do despite restrictions set down in legislation severely limiting what this could be. A particular bone of contention was the notion of value for money, an intrinsic part of the Higher Education and Research Act’s remit, when value was seen by students in much broader terms.

Incidentally, it has proved surprisingly difficult to get any panel members or former panel members to speak on the record about their experiences. This appears to be less because of any overt restrictions placed on them by the regulator than because of a reluctance to be linked with an organisation that has regularly come in for criticism. The appointments to its board of right-wing journalist Toby Young—who later resigned—and Wharton, who retains the Tory whip, probably haven’t helped.

Longdon acknowledges that in the early days, students tended to be presented with finished, polished policy documents to critique and add comments. “I think that’s not the most efficient or effective way to engage with students, so we’ve moved to a much more formative model now,” she says. “Our student panel members are engaging with policy work at a much earlier stage and they are becoming more and more embedded in the process as well as the end product for those policies.”

Student panel meetings are now more workshop-based, with policy teams coming to discuss particular policy areas rather than just informing the students about decisions that have already been made.

Benjamin Hunt, student engagement manager at the OfS, concedes that many in the sector were initially unclear about what the panel did or what the point of it was. “I think internally we really see their impact every day over what they do and their work and how they affect us,” he says. “Perhaps our communication of that hasn’t been as effective.”

He says the panel looks for students willing to challenge, willing to listen to others from diverse backgrounds and with experience of listening to other students and representing what they have to say.

Like other members of the OfS board, Longdon receives £9,180 a year for an estimated 20 days of work, but ordinary student panellists receive £1,200 a year.

For this, they are expected to attend five regular meetings and can attend extra sessions and workshops on specific areas—the National Student Survey review was one, student expectations of digital learning another—if they are interested. They may also contribute to blogs and reports or sit on advisory groups and attend events representing the panel.

How far have they been involved in issues around freedom of speech? Longdon says, carefully, that it will be useful for students to have their say, particularly on any complaints system—once the relevant legislation has gone through.

As for the panellists’ own freedom of speech: “They can absolutely speak their minds,” says Hunt. “We would expect them to challenge us. In fact, there’s no point having a panel if they were just going to agree with every single thing that we were doing.”

He says that panellists have challenged the OfS on access and participation, where they insisted that progress in this area should be faster and that more student groups should be targeted, and on questions to do with the cost of living and student finance, which were a particular concern during the pandemic.

“Of course, we don’t regulate the student finance system directly,” he says. “But we’ve been able to have those conversations, which has been useful.”

A former president of the student union at King’s College London, he defends the fact that the panel has no formal NUS membership on the grounds that the job of the panel is not—unlike the NUS—to represent students but to give a student perspective on the work the OfS is doing.

Hunt says the OfS has separate meetings with NUS sabbatical officers, which have offered useful challenges as well as support for policy developments and for training the panel. Closer collaboration between the panel and the NUS, and other student representatives, is envisaged for the future.

The OfS is refreshing its priorities for student engagement and the panel will be expected to help drive that forward, with a report expected shortly. It has also been feeding into consultations on quality and standards, on the future of the Teaching Excellence Framework and the National Student Survey, and on the OfS’s proposed strategy for the next three years.

Longdon is particularly proud of the work the panel has done during the pandemic, which she says highlighted problems with quality in the higher education system and shone a light on inequalities. Both are areas she wants to focus on before her term ends. (These also happen to be the two pillars of the OfS’s proposed three-year strategy.)

Student voices have been surprisingly muted over the past couple of years, despite having had plenty to talk about—from the effects of the pandemic to lecturer strikes to rising rents and costs of living.

The latest issue for them to wrestle with has been the government’s response to the Augar report. According to the Intergenerational Foundation, which researches fairness between the generations, if the government’s finance proposals go ahead, the lifetime student loan repayment for a graduate on a starting salary of £30,000 will more than double—to £68,000.

It will be interesting to see whether, with a new team voted in at the NUS and a highly experienced student representative on the OfS board, their voices will get any louder.

A version of this article featured in the 8am Playbook email on 4 April. For a personal email copy of the Playbook, please fill in this form and add 8am Playbook as the subject. You can unsubscribe at any time.