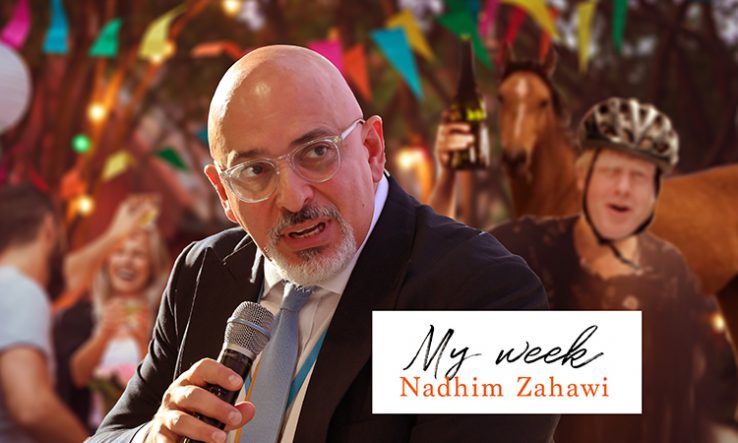 Ivory Tower: exclusive access to the diaries of the education secretary

“There’s going to be a vote of confidence,” says the voice from central office.

“We need you to defend the PM,” says the voice.

My wife turns over and asks, “Who is it?”

"There’s going to be a vote," I tell her

“Tell them it’s a bank holiday,” she says.

“Probably,” she says, and goes back to sleep.

“We need you to say this is all a distraction,” says the voice.

“This is all a distraction,” I say, half-asleep.

“Is it?” says central office.

“Brilliant,” says the voice on the phone.

“Do you mean, ‘brilliant!’ or ‘brilliant’?” I ask, confusing myself further.

“Is this the vote of confidence you had me say last week was definitely not going to happen?” I ask.

“It’s a distraction,” they say.

“You are the only one who answered the phone,” says central office.

The vote against Boris totals 148 MPs. I am in my office at the DfE with my personal private secretary.

“It could have been worse,” they say.

“We could now be in a leadership contest,” they say.

“You are going to have to make up your mind,” my PPS says.

“Making up your mind?” they say.

“You can’t hide in here forever,” they say.

“But you don’t know what it’s like, the questions, the scrutiny, your soul laid bare under the intense gaze,” I say.

“If central office wants you to do it, you can’t say no,” says my PPS.

“Go on the Kay Burley show to defend the PM, yes,” they say.

“Run for leader,” I mumble, looking at my shoes.

“No, that would be ridiculous. Ring them back and tell them you’ll go on Kay Burley,” they say.

“But you don’t know what it’s like, the questions, the scrutiny, your soul laid bare under the intense gaze,” I say.

“It can’t be any worse than Raab,” they say, picking up the phone to ring central office.

“When is the next bank holiday?” I ask.

“This is outrageous,” says the woman from the DfE press team.

“You’ll need to be more specific,” I tell her, looking at the front pages of the newspapers on my desk.

“This,” she says, holding up her phone.

“Contract gone up with inflation?” I ask helpfully.

“Someone on Twitter is claiming that YouGov spiked a poll that was too pro-Labour,” they say.

“You’ll need to be more specific,” I tell her.

“Look, this could be very damaging,” she says.

“The story or the poll?” I ask confused.

“We need to issue a statement,” she says.

“What should it say, minister?” she says.

“I don’t know, it was your idea,” I say, becoming more confused.

“You can’t defend the indefensible, minister,” she says.

“Can’t I?” I ask, beginning to doubt what I’ve been doing all these years.

“What would you like to say in your statement?” asks the press officer.

“Hmm, not sure that will shut this down,” she says.

“It’s a distraction?” I offer.

“Good start, anything else?” she asks.

She sighs and walks away, muttering “brilliant”.

“Is that “brilliant!” or…never mind,” I say, as she closes the door behind her.

I am in the back of a car heading to a TV studio when Michelle calls on the speakerphone.

“What do you think?” she asks.

I look at my spad, who shrugs.

“It’s a distraction,” I offer.

“We need to move on from this fluff,” I say, looking at my spad, who seems to be doing Wordle.

“But I thought it was what the PM wanted,” says Michelle.

“Definitely, he told me so himself,” she says.

“At a party…err a work event,” she says, correcting herself.

“Yes, he’s very keen on the idea. I’d go so far as to say it was his preferred option,” she insists.

“That changes everything,” I say, trying to catch my spad’s eye, who is now on the fifth line of the Wordle grid.

“So it’s not a distraction then?” she asks.

My spad has finished Wordle now and asks, “What’s happening?”

“I am giving a speech at Hepi,” says Michelle at the same time.

“Is that what you meant by distraction?” says Michelle.

I look out of the window.

“That’s the worst idea I have ever heard,” says the spad.

“Can’t be worse than Raab,” I say, still staring out of the window.

“No, giving a speech at Hepi—have you seen the guest list?” says my spad.

“What if someone asks you a question?” says the spad.

“About the leadership?” I ask.

“At Hepi,” the spad shouts down the phone, “you don’t know what it’s like, the questions, the scrutiny, your soul laid bare under the intense gaze.”

“But the PM…” says Michelle.

“It’s a distraction,” says the spad.

“Maybe I won’t do the press conference afterwards,” says Michelle, but then we enter a tunnel and we lose her.

“And when were you going to run this past me?” says the spad.

“The leadership?” I ask.

They turn away and look out of the window.

They are still looking out of the window.

I’m in the study at home when the phone rings. I don’t recognise the number, but it’s not central office, so I answer it.

“Old bean, how are you?” asks the voice.

“Got a moment for an old friend?” he says.

“Have you changed your number again, Jeffrey?” I ask.

“Got to, old boy. Got to keep the phone hackers on their toes,” he says.

“I can get texts and minutes with my Tesco Clubcard. Anyway, that’s not why I rang,” he says.

“I was listening to your social mobility tsar and had a revelation,” he says.

“Why don’t you write it down and send it to the department,” I say.

“Like a bolt out of the blue,” he interrupts.

“Really?” I say, looking at the clock.

“Yes, I said to myself ‘this is wrong, quite wrong’,” he continues.

“That working-class students shouldn’t aspire to Oxford and Cambridge?” I ask.

“No, that’s right, of course they shouldn’t—can’t have people from Clackhuddersfax taking up a place on the rowing team,” he says.

I put the phone on the desk and let him speak. I back slowly out of the room.

“No, the thing is, you can’t have a social mobility tsar, can you? How can your social mobility person also be part of an immutable and hereditary system of privilege? Now, a social mobility president, that makes sense. If that’s what you want, I suppose. Personally, I would just encourage young thrusters to join the Conservative Party. A bit like yourself. Are you still there? Are these Tesco Clubcard points still working? Old bean?”

Terms of use: this is a free email for fun on a Friday. It should be shared with colleagues like a letter of no confidence in a deeply unpopular prime minister. Want to see backstage at the Kay Burley Show? Want to say hello? Email ivorytower@researchresearch.com