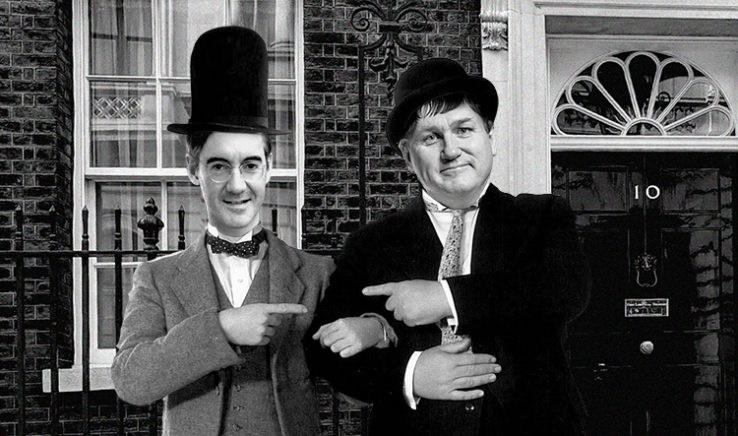 Artwork by Grace Gay for Research Professional News. Images: LadyGeekTV [CC BY 2.0] and Chris McAndrew [CC BY 3.0], via Wikimedia Commons

Ivory Tower: Exclusive access to the journal of the new education secretary

We are all filing out of Graham Brady Hall when I find myself next to Jacob Rees-Mogg.

“Thank the Lord that is over,” he says.

“Certainly not, he is a much-loved public servant who has been cast aside by an ungrateful party. I mean the interminable leadership contest,” he says.

“I’d have thought you would have wanted it to last longer,” I tell him.

“Why so?” he says peering down his spectacles at me.

“Because now that Boris is gone no one else is going to give you…” I say, stopping myself as I realise how that sentence is about to end.

“No one else is going to give me what, Christopher?” he says using my full name, which really annoys me because only my mum calls me that.

“Such an interesting job as Brexit opportunities minister,” I say—good save Kit.

“Quite so, Christopher, no one but Boris would have the vision for such a role,” he says, taking out a monographed handkerchief to dab his eyes.

The queue for the exit is a bit slow, so I ask, instantly regretting it, “Did you find any in the end?”

“Any what, Christopher?” he asks.

“Yes, there’s pretty much nothing, is there,” I nod in agreement.

“Why would you want to do that?” I ask, desperately hoping that Nadhim Zahawi would stop speaking to everyone at the door as they leave, reminding them he is still the chancellor until tomorrow.

“Nanny often complains about not being able to reach the cobwebs above the picture rail in the breakfast room,” he explains.

“We left the European Union for that?” I ask, hoping that no one overheard me.

“Nanny is a Tartar when it comes to cleanliness,” he replies.

“With thinking like that they should make you energy minister,” I joke.

“Not a bad idea, Christopher. I will suggest it to Elizabeth when she invites me to Downing Street,” he says. What have you done, Malthouse?

I am in the prime minister’s office with Liz Truss.

“Isn’t this amazing!?” she says, playing with a Newton’s cradle.

The phone rings and she answers it, “Hello…no he isn’t here…he doesn’t live here anymore…no I’m not his wife…I don’t care if he did promise to ring you, please don’t call this number again.”

She puts the phone down. “Tenth one today,” she says and goes back to playing with the executive toy﻿.

“Yes, during one of the hustings as you raced passed me saying you couldn’t stop but we should have a chat some time,” I remind her.

“I thought maybe you wanted to talk about a job,” I say tentatively.

“Well, the wallpaper will need doing again,” she says, pinging one of the balls so hard the one at the other end nearly goes into orbit.

“I meant with the cabinet,” I say.

“Right,” I say, feeling rather awkward.

“Do you know how this thing works?” she asks.

“No, this executive toy,” she says, staring intently at it, and then at me.

“Err…it’s to do with the conservation of momentum, if I remember my GCSE science,” I say.

“That is correct. How did you get so brainy? I’m going to make you education secretary,” she says.

“Thanks, but I’ve no experience of education,” I say.

“Sounds good to me,” she replies. “Plus it will stop Badenoch having a platform.”

“You are no-platforming Kemi?” I say, confused.

“No, no, no. I’m just sending her to trade. It’s a job anyone could do,” she says staring at the Newton’s cradle again.

“But didn’t you used to be…” I say, stopping myself as I realise how that sentence is about to end.

But she is not listening anymore.

I enter the lobby of the Department for Education and am met by the permanent secretary. The civil servants are lined up, some are on the staircase looking down.

“They are here to applaud,” says the permanent secretary.

“Is it Thursday? Are we doing that again?” I ask.

“No, they are here to applaud you, secretary of state,” explains the PS.

“And they do that for every incoming minister?” I ask.

“They’ve probably spent more time this year applauding all the education secretaries we’ve had than actually doing any work on education,” I say, making a joke.

“Tell them to get back to their desks. It’s too embarrassing,” I say to the PS.

“The minister is too modest,” says the PS, and waves away the civil servants like a haughty maître d’.

“I’d much prefer if they applaud when I leave,” I say.

“They come and stand in the lobby and on the staircases and cheer?” I ask, impressed.

“No,” she says confused.

“Right,” I nod and follow her to my new office.

I am in the Commons’ tea room with Nadine Dorries.

“I’m education not culture, Nadine,” I remind her.

“No, as one of the few remaining true Scousers in the cabinet,” she says.

“Don’t be sorry about it Lar,” she says.

“I don’t know what you are talking about,” I say confused. “I’m not from Liverpool, guvnor I’m from London town.”

“No, you’re not. You’re from Aigburth. You went to Liverpool College,” she says, clearly confused.

“I was the deputy mayor of London. I live in London. I work in London. I’m MP for North West ’ampshire,” I say, straining my genuine Cockney voice.

“You are confused Nadine; maybe you are thinking of when I was Chancellor of the Duchy of Lancaster, corr blimey Mary Poppins, apples and pears,” I say, perfectly naturally.

She rolls her eyes and walks away. What was that all about?

I’m working from home, keeping an eye on the mini-budget and trying to get on top of my red boxes, when the phone rings.

“Felicitations, Christopher, are you receiving me?” says Jacob Rees-Mogg.

“Are you working from home, Christopher?” he asks.

“I was,” I say trying to sound peeved.

“I am doing an audit for Elizabeth on ministers who work from home,” he says.

“We think ministers should set a good example and leave home to go to work,” he responds.

“But she literally lives in Downing Street, where she works,” I tell him.

“That is a burden the prime minister must carry,” he says, sounding like a depressed undertaker.

“Where are you right now, Jacob?” I ask.

“I am in the conservatory, it is the best place to use my mobile telephonic device,” he says.

“The conservatory at Beis?” I ask.

He hangs up. Now, back to those boxes—what is a conditional unconditional offer anyway?

Terms of use: this is a free email for fun on a Friday. It should be shared with friends like higher rate tax cuts. Want to try your hand at being science minister? Want to say hello? Email ivorytower@researchresearch.com